Washington – Amtrak says it will have to make further cuts to its service and workforce –changes that will impact  Connecticut riders — if Congress does not approve another $1.5 billion in emergency pandemic funds.

The blow coronavirus has dealt the railroad has forced it to move $500 million from its capital improvement fund to its operating account, a move that threatens projects like the replacement of the Walk Bridge near Norwalk.

A GOP proposal released Monday afternoon contained no new money for Amtrak, although a previous pandemic bill Congress approved in March, called the CARES Act, provided the rail service with a little more than $1 billion. The Northeast Corridor (NEC), the rail service from Washington D.C. to Boston, received $492 million from the CARES Act  and Amtrak’s other routes received $526 million.

But Amtrak says that federal help is not enough.

“Amtrak, like all other modes, has seen a dramatic decline in demand for service since the pandemic, and is expecting ridership to only return to approximately 50% in FY 2021,” the company said in a statement.

It also said that without nearly $1.5 billion in new support, Amtrak “will be unable to minimize the impacts to service and its workforce.”

Before the pandemic hit, the company was reporting record number of rail passengers. In the last fiscal year, which ended Sept. 30, the company said it had more than 1.8 million riders in Connecticut.

But, in a May letter to Vice President Mike Pence and House Speaker Nancy Pelosi, D-Calif., Amtrak CEO William Flynn said recent polls showed about half of those surveyed expressed reluctance to ride a train in the next six months, and that more than a third said it would be more than a year before they would do so.

Sens. Chris Murphy, D-Conn., and Richard Blumenthal D-Conn. are among senators representing states along the Northeast Corridor who are pressing for more money for Amtrak in the next stimulus bill. Although the Senate Republican plan, called the HEALS Act, has no money for Amtrak, the senators hope a final bill negotiated with House Democrats will provide at least an additional $1.5 million.

“We can’t recover as a region if (Amtrak) service is chopped in half,” Murphy said. “This is real crisis moment for Amtrak.” 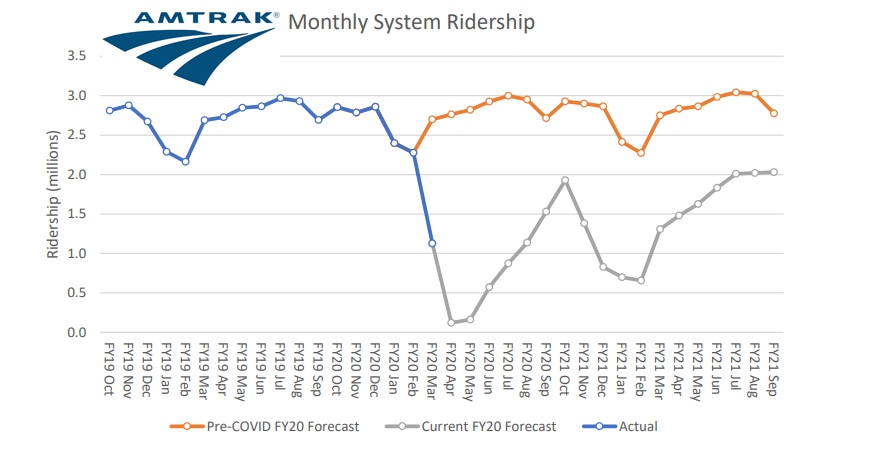 Murphy said that opposition was based on GOP reluctance to help “blue” states like Connecticut, Massachusetts, New York, New Jersey and Maryland. But he noted the Amtrak’s long distance lines – which are the company’s main source of red ink – serve Republican-led states too, and the rail company has the support of key lawmakers from those states.

“I don’t understand why Republicans are so enthusiastic about helping the airlines and so opposed to helping the railroads,” Murphy said.  The nation’s airlines have received $25 billion in federal pandemic help.

Murphy also said Amtrak’s decision to shift capital improvement money to operations has endangered projects like the Walk Bridge. The $1 billion cost for replacing the aged railroad bridge would be borne by both the state and Amtrak.

“That’s a project that may not happen,” Murphy said.

“Without this funding, Amtrak will have to take additional dire measures that could impact the NEC and our only nationwide passenger rail system for years,” the senators wrote.

In a recent message to employees, Amtrak said more cuts to service across the nation are coming on October 1 and service on several long-distance routes will be cut back to three days a week. Affected routes include the Empire Builder from Chicago to Seattle and Portland, the Southwest Chief from Chicago to Los Angeles, the Coast Starlight from Los Angeles to Seattle, and the Crescent from New York to New Orleans.