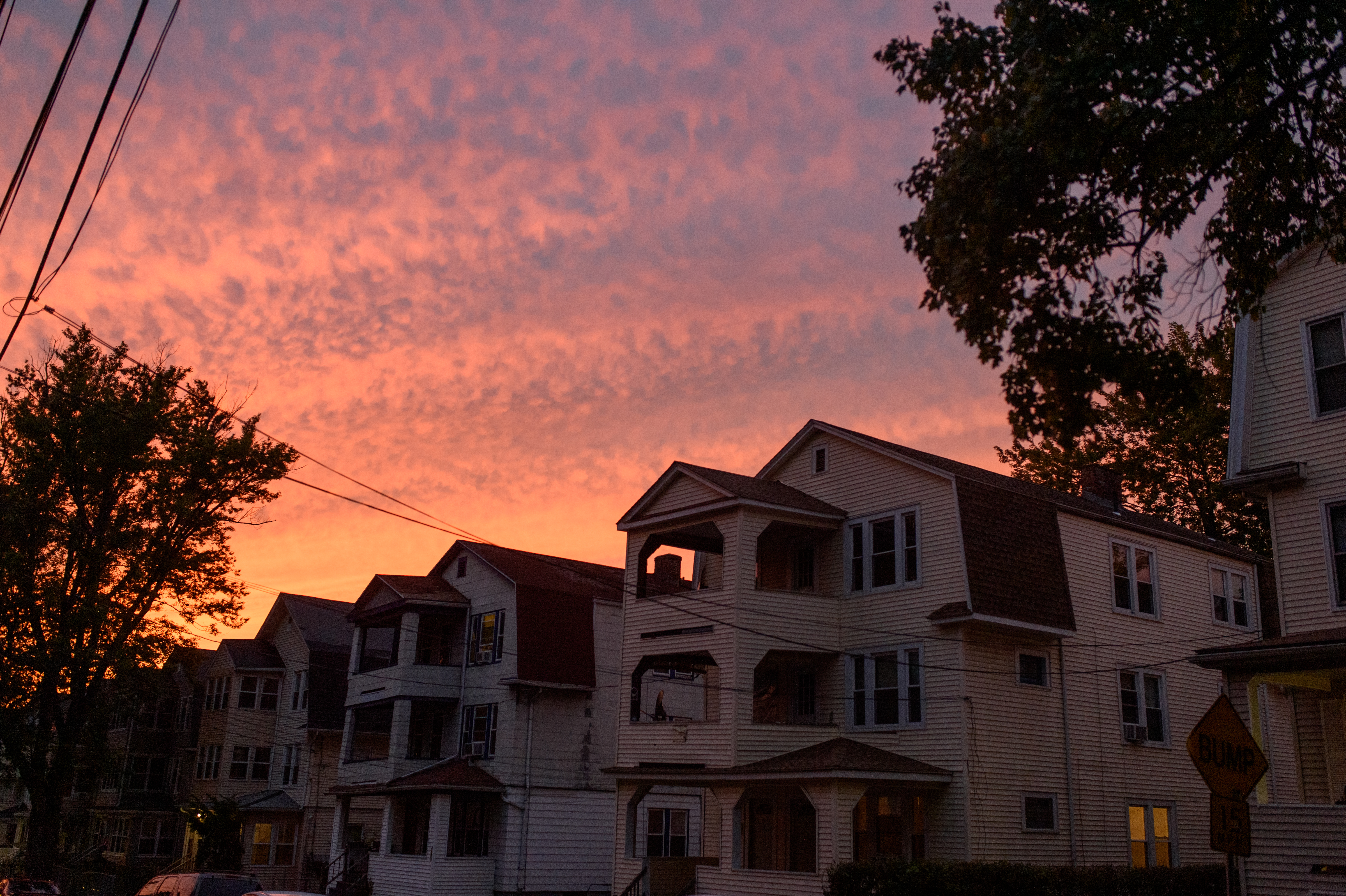 Few qualify for state housing assistance – and a crisis looms

Homes in the Frog Hollow neighborhood  |   photo by: Monica Jorge

Connecticut is on the precipice of a housing crisis, if it hasn’t already arrived.

Only about 170 of the callers actually qualify for help under the program’s narrow parameters – and the odds will soon get worse unless something changes.

State eviction rates are expected to jump from 4% in a typical year to 7% this year, the governor’s office recently concluded after surveying landlords. Nearly a quarter of renters in Connecticut missed their June rent payment, and roughly one-in-11 homeowners here are behind on their mortgages. Women, Black and Hispanic people, and those living in the state’s largest cities are disproportionately affected by this economic downturn and the resulting housing crisis.

Are we on a track to use all the money? Without question.”— Michael Santoro, CT Department of Housing

But the rental program, launched in late June, is on financially shaky ground: it currently has enough funding to help about 2,500 applicants – about $10 million. Qualified applicants can receive up to $4,000 in assistance over a four-month period. But nearly 1,600 people qualified for rental assistance in the program’s first 10 days; and only 22 people qualified for help paying their mortgage in that time period.

And the calls keep coming.

“Are we on a track to use all the money? Without question,” said Michael Santoro, a top official at the Connecticut Department of Housing. “There are competing forces against the amount of money that we have available.”

Those who do end up losing their homes won’t be able to count on a homeless shelter as a backup. Most of them are full, thanks to the need to reduce capacity due to social distancing efforts. Between April and June, 1,544 homeless people seeking help were either turned away or placed on a wait list, more than three times the typical number, reports the Connecticut Coalition to End Homelessness.

The situation was dire even with the federal government’s $600 boost in weekly unemployment benefits from the Coronavirus Aid, Relief, and Economic Security Act, passed by Congress in March. That benefit ended last week, and the state and federal protections that forbid evictions and foreclosures for non-payment during the pandemic are set to expire in the coming days. A flood of evictions is expected to follow just as the federal financial backstop disappears.

Meanwhile, Congress is mired in difficult negotiations over whether, or how much, to continue some form of COVID-related aid to individuals. At the state level, neither Gov. Ned Lamont nor the General Assembly are stepping up to provide state funding for housing assistance.

“It’s bad,” said Erin Kemple, executive director of the Connecticut Fair Housing Center, a civil rights organization that advocates for those struggling with housing insecurity. “We’re going to see an overwhelming number of evictions. We can’t wait for Congress. It doesn’t look like we are going to get anything.”

Slipping through the cracks

Andre Quinones is one Connecticut resident the housing assistance system is failing. He lived in a black Honda Civic until January, when his mother pieced together enough money to rent him a one-bedroom apartment in Vernon.

Rosanna Quinones wanted desperately to give a second chance to her 26-year-old son, who was abused as a child and struggles with learning disabilities and mental health and addiction issues. Moving into his own apartment finally helped him forge more stability – he began attending treatment programs regularly and assembling some routines. 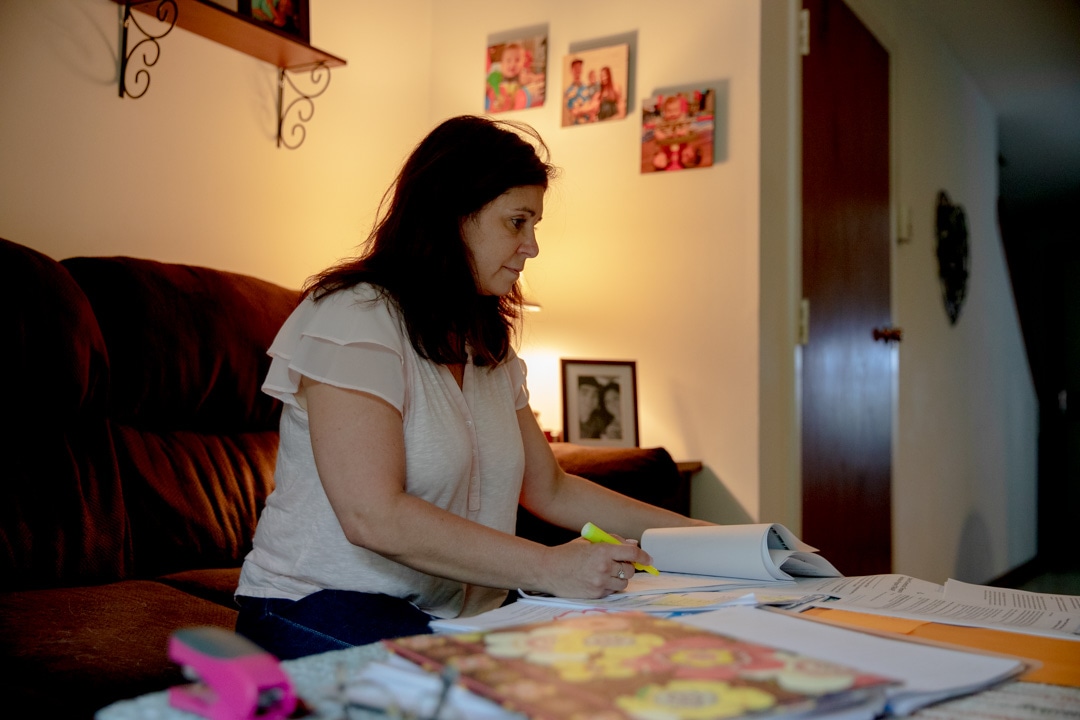 Rosanna Quinones, of Ellington, organizes documents needed to apply for assistance programs for her son. “I’m hoping that with everyone’s help, maybe if he gets into some programs, he’ll some day be able to go to work,” Quinones said.

“I wanted him to feel safe again,” Rosanna said. “He finally has some structure, because he has a roof over his head. He is getting help. He is maturing and doing better.”

But when the pandemic hit, Rosanna was furloughed from her $70,000 job as a dental hygienist and the extra $600 she was getting in federal unemployment benefits, which allowed her to continue paying Andre’s rent, ended last week.

This puts the family into the same category as many of those 1,100 callers: they need the help, but they don’t meet the narrow requirements imposed by the Connecticut Department of Housing – requirements put in place to ration the finite funds. Like many others, Rosanna spent hours on hold on the phone before she found that out.

Income requirements set by the state mean aid is only available to those who were making 20% below the federally established median income for each metropolitan area before COVID-19 hit. A single individual like Rosanna would need to make less than $55,000 a year to qualify. And because her son wasn’t working before the pandemic hit, he doesn’t qualify either. She filled out an application anyway, just in case. 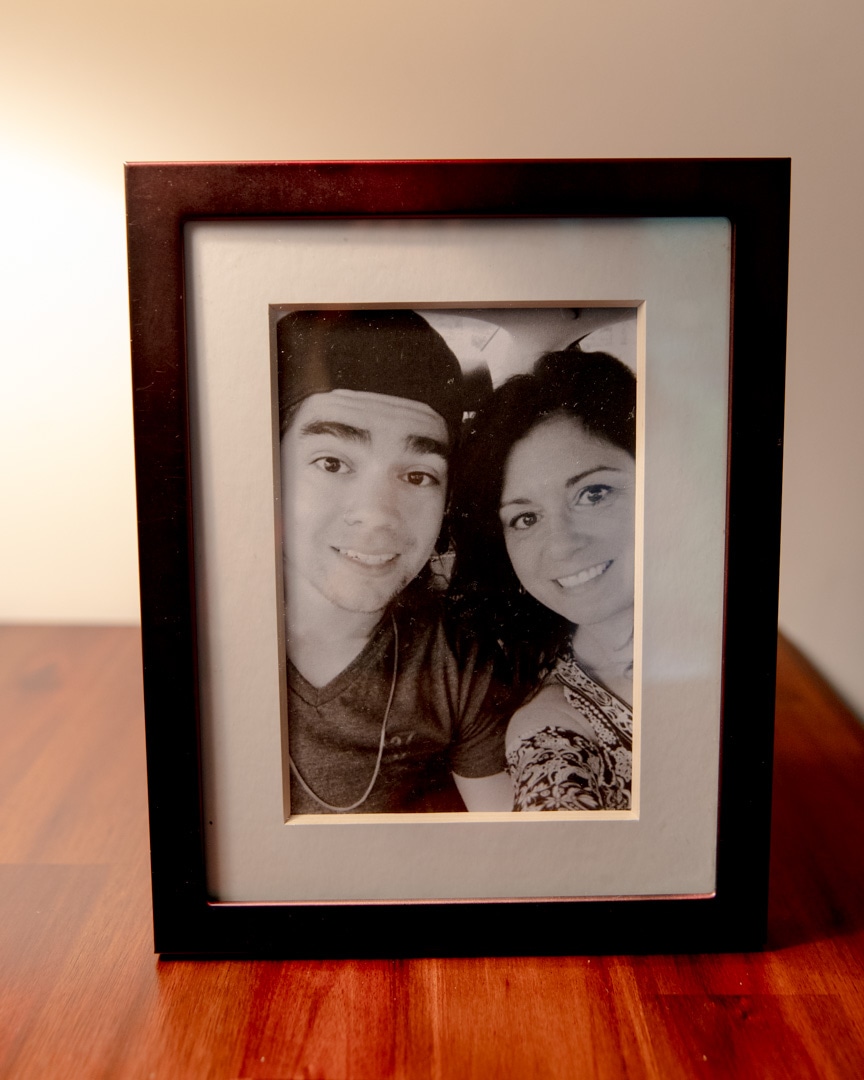 A photo of Rosanna Quinones, right, and her son sits on a table at her home in Ellington. As the extra $600 she has been getting for unemployment ended, Quinones said, “I’m concerned that he could be homeless again without some assistance.”

When things don’t add up

Income caps and an employment history aren’t the only requirements for this housing assistance. The aid is also only available to those who have been denied unemployment compensation, including that extra $600 a week, for the first four weeks.

Low-income families and their advocates say that unemployment compensation isn’t always adequate. Besides that, there’s often a delay between applying for unemployment aid and the labor department decision as to whether they are eligible to receive it.

The Department of Labor this week was unable to say how many people have been denied unemployment and how many people are waiting for a hearing – and for how long – to determine if they qualify for the benefit. On Tuesday, the department was processing applications made 11 days earlier.

Still, the housing department’s position is that people receiving those benefits, even in a reduced capacity, are in a better position to afford rent themselves, Santoro said, and they should seek that aid first before coming to the Department of Housing for help.

It’s very hard when you have three kids like I do, especially one who has a disability, to try and show them that life goes on and to not make them worry when I am breaking inside.”— Rosa Franco

“Those who are denied unemployment are the ones in trouble. Those are the households with the highest need, and that’s why we prioritized them,” he said. “When we look at a governmental program, we have to look at priorities. If we had an endless bucket, then yes, we would have thrown the program open. …  We are sitting here trying to allocate funds responsibly and sensibly. ”

“If I can show need, then we will go back and ask for more money,” Santoro said. “If we document the need, that gives us ammunition to go back to the administration and say, ‘The need is here, but the money is here, and we need to change the equation.'”

Rosa Franco, unable to access unemployment benefits after being let go from her $12-an-hour job at McDonalds in Darien, has been borrowing from friends and family to pay the rent for the Stamford apartment where she lives with her three children. She is hesitant to apply for rental assistance from the state, but said she may not be able to avoid it much longer.

“It’s difficult to survive,” she explained. “Everybody’s looking for work right now. It’s very hard when you have three kids like I do, especially one who has a disability, to try and show them that life goes on and to not make them worry when I am breaking inside.”

The crisis is almost here, and the rental assistance program is not being run in a way where it’s going to have a massive impact on potential evictions.”— Attorney Rafie Podolski

But advocates warn that the pool of housing assistance may be tapped out by the time people burn through their savings and have nowhere else to turn.

“The crisis is almost here, and the rental assistance program is not being run in a way where it’s going to have a massive impact on potential evictions,” said Raphael “Rafie” Podolski, a legal aid attorney who lobbies at the state Capitol.

With no influx of rental assistance on the horizon, some landlords are desperate for the courts to open back up so evictions can resume. Some landlords say they are willing to work with those who are struggling to pay rent because of the downturn, but there are some tenants who are taking advantage of the courts being closed and the eviction moratorium.

“This is not sustainable,” said Jason Lipman, the owner of a two-family home in Vernon. One of his tenants stopped paying him two months before the pandemic hit and hasn’t paid since. He can’t currently evict them. “Something needs to change. I didn’t sign up to provide them aid out of my pocket.”

Lipman looked into whether he qualifies for the state’s mortgage assistance program.