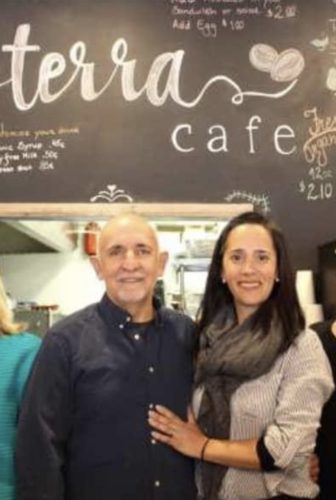 Débora Cabral is fortunate; she will likely become a citizen in time to cast her first vote as an American in November’s general election.

Cabral met her husband Manuel Rocha, a naturalized citizen since 1975, at a restaurant in the Azores region of Portugal nearly a decade ago. They now run a cafe together in Monroe. After seven years in the United States, one of the things that drove Cabral to become naturalized was her wish to fully participate in a democratic system.

But thousands of other immigrants living in Connecticut are still waiting — and longer than usual — to become American citizens as naturalizations have been slowed by the pandemic and Trump administration policy changes.

As of March 31, just over 7,600 immigrants were stuck in a backlog of pending cases in the Hartford office of the U.S. Citizenship and Immigration Services agency. The state’s backlog represents only a small fraction of cases pending nationwide — more than 700,000 at the end of March, according to the USCIS.

Boundless, a technology company that helps immigrants obtain green cards and citizenship, estimated in July that more than 300,000 people are at risk of not being able to vote in the November election because of the backlog in citizenship applications; about 4,200 of those people live in Connecticut.

After applying for citizenship, an immigrant must take a civics test and undergo an interview, then attend an oath ceremony. But when the pandemic hit in March, all naturalization services were stopped.

The Hartford field office resumed oath ceremonies in June. On a national level, the USCIS has since cleared the backlog of people on the cusp of citizenship who could not take their oaths because of the pandemic. But the agency has not offered a way to conduct interviews in a virtual way, so those have been slowed.

“People asked for virtual interviews, but (the USCIS) is not able or willing to do that,” said Randy Capps, a director of research at the Migration Policy Institute. “I can’t say they are deliberately slowing things down, but they have certainly not been proactive.”

Cabral waited more than a year after filing the application for her interview in April, but it was cancelled because of the pandemic. It has since been rescheduled for  Sept. 15 and if she clears the interview, she should be allowed to take her naturalization oath on the same day.

Bu even without the disruption caused by the pandemic, Cabral and other immigrants were already facing a more complicated, drawn out process to become citizens since President Donald Trump assumed office. In FY 2016, before Trump took office, the average wait time for naturalization was 5.6 months. In 2020, that rose to 8.8 months.

A Migration Policy Institute study said delays were potentially caused by three factors: a more stringent vetting process that requires applicants to provide more information, the failure to launch an electronic database, and the reassignment of USCIS agents to other duties, including asylum applications during the border crisis in 2018.

USCIS field offices provide a range of wait times based on the previous month’s processing data. For the Hartford office, 50% of naturalization applications receive a decision in 11.5 months, while 93% receive a decision within 15.5 months of filing.

“This isn’t what we were seeing in the past,” said Ur Jaddou, director of DHS Watch at America’s Voice, an immigrant advocacy group.

“This type of time frame is not acceptable,” said Jaddou, who served as the federal immigration agency’s chief counsel from 2014 to 2017. “Our goal was to get it under six months.”

She said the slowdown may not be intended to disenfranchise immigrants, but it will keep them from the polls anyway.

“Are they working hard enough to make sure people can get naturalized in time to vote? No. Everything the (USCIS) has done has resulted in a slowdown,” Jaddou said.

There was a time when Connecticut immigration lawyer Alicia Kinsman remembers being able to tell clients  their naturalization applications would take somewhere between four and six months. Now, the senior staff attorney at the Connecticut Institute for Refugees and Immigrants says that “there’s no short explanation.”

Meanwhile, the USCIS said it is whittling down its backlog and this year will naturalize 600,000 immigrants by the end of September. In FY 2019, the agency naturalized 834,000 immigrants, an 11-year high, according to USCIS spokesperson Dan Hetlage. The Hartford office naturalized 8,396 new citizens over the same period.

“USCIS continues to naturalize candidates from the pending naturalization caseload, which skyrocketed under the previous administration, more than doubling from 291,800 in September 2010 to nearly 700,000 by the beginning of 2017,” he said.

Nationally, naturalization applications soared by nearly 20% in 2016 and 2017, said Capps of the Migration Policy Institute. The presidential election took place in 2016, and 2017 was the first year of Trump’s term.

“It was quite clear during the campaign that he was going to ramp up enforcement against non-citizens,” Capps said, adding that “citizenship was viewed as a form of protection.”

In Hartford, the number of pending cases grew from approximately 7,600 to 9,500 in the first few months of the Trump presidency.

A delay in processing time can cost immigrants more than the right to vote in a general election. For applicants with children on the verge of adulthood, a processing delay could mean that their children will have to file separate applications from their parents, Kinsman said. And immigrants who file after October 2 will be subject to USCIS’ new fee structure, which eliminates waivers and hikes fees by over 80% in some cases as the agency struggles financially.

As Trump presided over a naturalization ceremony at the White House that was broadcast as part of the Republican National Convention’s prime time events last week, the USCIS reversed itself on plans to furlough more than 13,000 USCIS employees – nearly 70% of its workforce. That would have crippled the processing of applications for green cards, work permits, U.S. citizenship and other immigration benefits.

After a pushback from Congress on the furlough plan, USCIS Director for Policy Joseph Edlow reversed himself and said he is able to avoid them because the USCIS’s financial situation had “improved somewhat” through the increase in application fees that fund the agency.

The president’s use of immigrants at the White House drew criticism, especially since Trump has acted to limit legal immigration into the United States in a number of ways. Those include restricting refugee and asylum claims, limiting the types of family members who can legally immigrate to the United States, and imposing a “public charge” rule that can prevent immigrants who enroll in certain social services from obtaining a green card or citizenship.

Capps slammed the president’s use immigrants as props in his re-election campaign. “This is like the president of the United States saying, ‘I personally naturalize you.’ … It flies in the face of objective democratic process.”