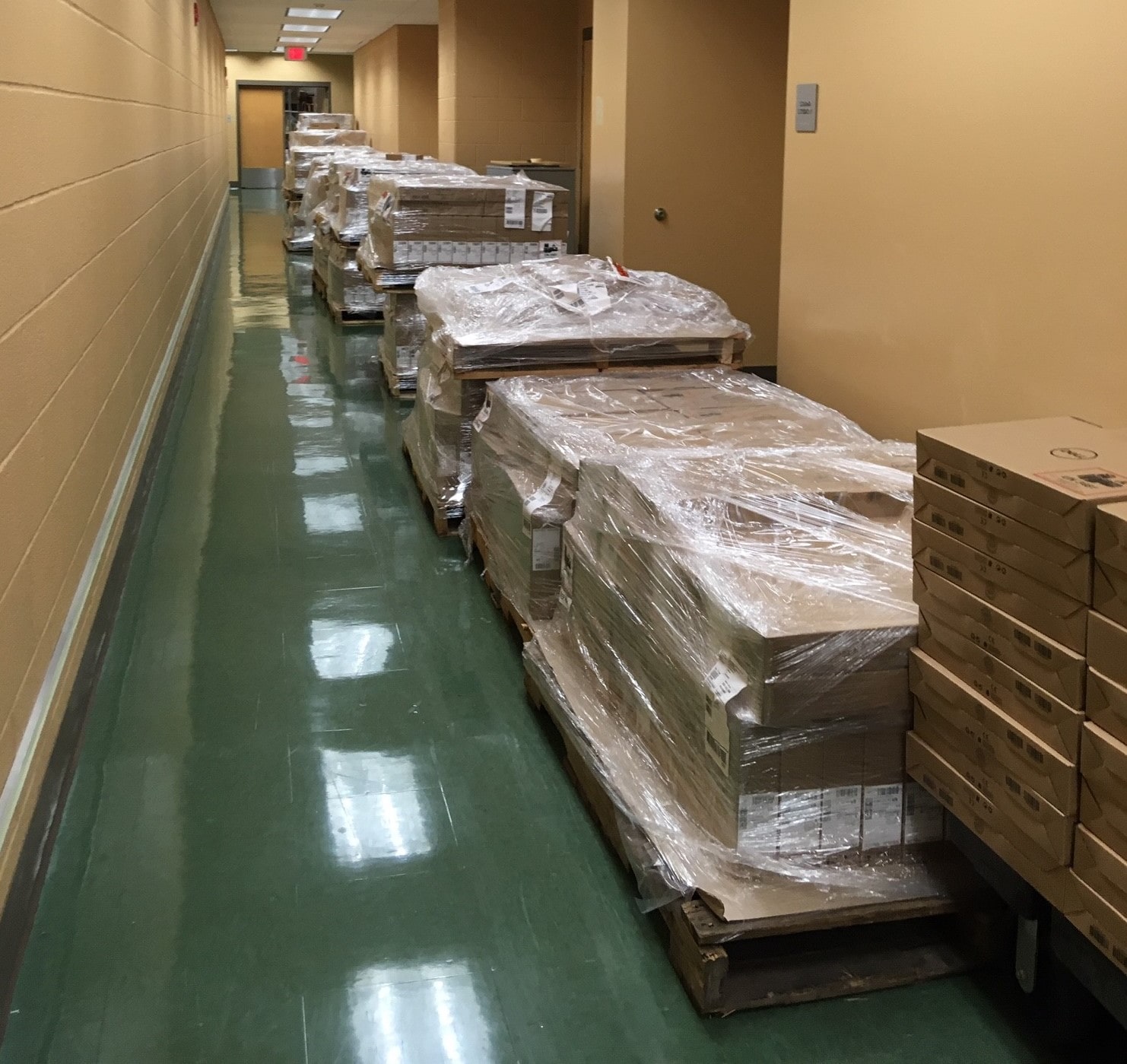 Some of the computers Bridgeport Public Schools received this summer to help students still learning at home.

With most school districts in Connecticut requiring that students learn online at least part of the time, the Lamont administration announced Tuesday that 20,000 of the 81,000 students who need a laptop for classes will receive one in the next few weeks.

Nearly 13,000 of the 53,000 families who need the internet will also soon be getting a wireless hot spot, the administration said.

The remaining computers are expected to arrive sometime in October and free broadband hookup for families will begin in the next two weeks.

Although the vast majority of school districts across the state are employing a so-called hybrid model, where students split their school week between in-person and remote learning, the Lamont administration for the last three weeks has declined to provide the CT Mirror with a district-by-district breakdown of how many laptops are needed and how many have been provided. Only 36 of the state’s 201 school districts offered students the option of returning to in-person classes full-time.

In New Haven, for example, which opened for online instruction only, 2,500 students didn’t log-in at all the first week. It’s unclear how many devices were requested by families in that district or how many have been provided by the state.

“From the beginning of this pandemic, we knew that our state had an obligation to tens of thousands of school children around Connecticut to make sure they had the tools necessary to further their educations, as we didn’t know how long this public health emergency would last,” Gov. Ned Lamont said in a press release announcing that 20,000 of the laptops will soon be delivered. “Now, our students are in a position where they have the tools necessary to participate and engage with this technology, and we can keep as many students as possible connected throughout this school year.”

The State Department of Education is working to set up a system to track weekly how many students are logging on, but state officials are unable to say when that monitoring system will be up and running. When schools shut down last March due to the pandemic, a quarter of students either skipped or were minimally present for distance learning. For many of those who went MIA, lack of access to the internet or a computer was an obstacle.

When the remaining devices are delivered, roughly 27% of all public school students in the state will have received a free laptop and every student who needs one will have it. When the broadband hookups are complete, at least 10% of the state’s students will be receiving free internet, though the reach is likely much greater since so many families have multiple school-aged children.

The wireless connections and about half the laptops are being paid for out of the federal money the state received from the CARES Act in early May. The remaining computers were purchased by the now-dissolved Partnership for Connecticut, which was a public-private venture between the state and billionaire philanthropists Ray and Barbara Dalio.

The state initially believed only 61,000 laptops would be needed in addition to the 60,000 purchased by The Partnership, but adjusted that number up to 81,000 after surveying districts about student need.

“We are prioritizing access to needed technology and connectivity to narrow gaps in opportunities and outcomes between students with means and those without,” Education Commissioner Miguel Cardona. “Educational equity will be our continued focus as we work together to support districts and educators with effectively employing remote learning methods that meet the needs of every student.”

Theaters can reopen on a limited basis, and restaurants and wedding venues can increase capacity.

Public schools, in need of more support staff, are teaming up to bring UConn social work students into the mix.