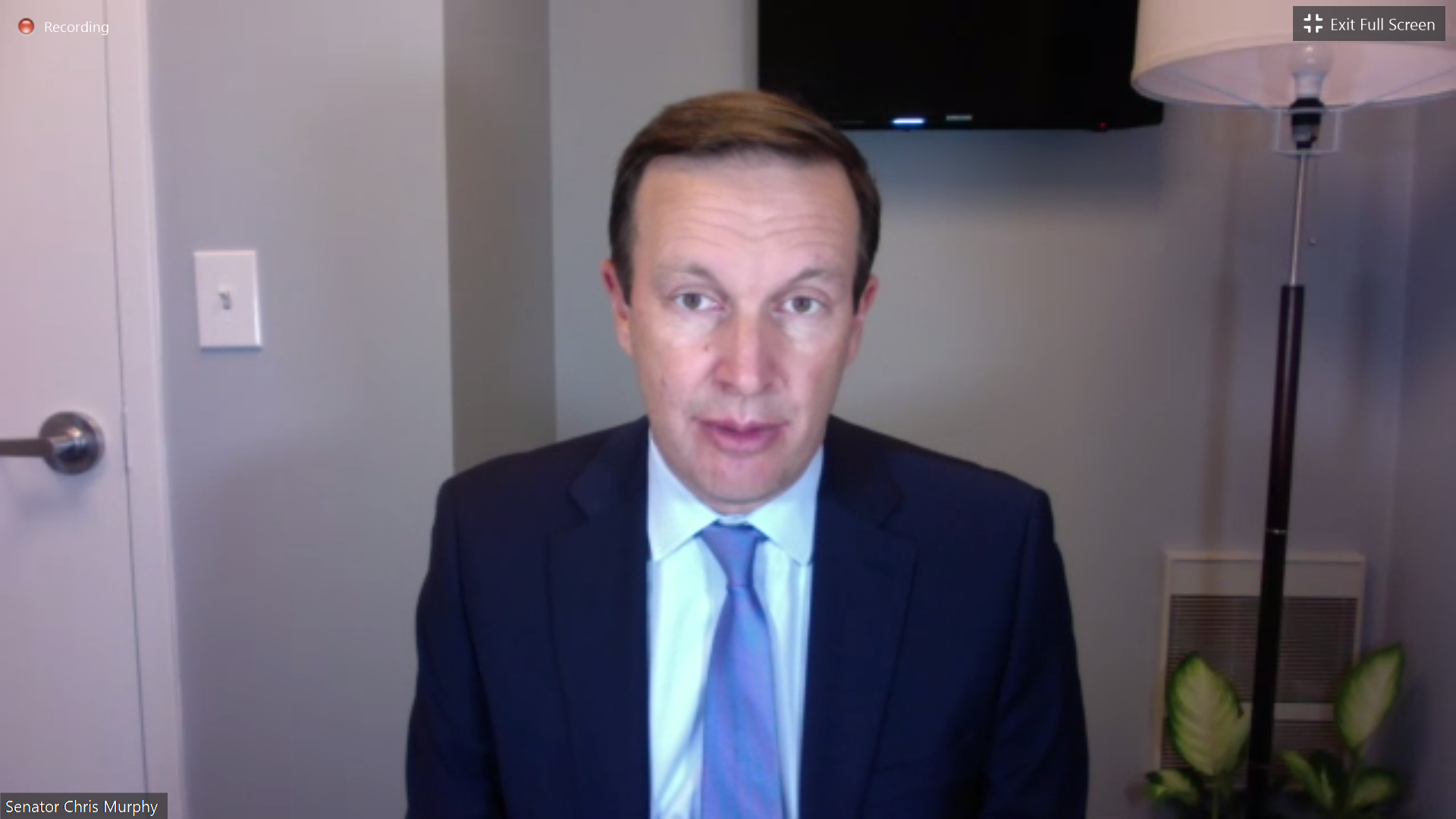 Washington – Connecticut is considered “safely” Joe Biden’s this year, but Democratic Sens. Richard Blumenthal and Chris Murphy  say they will campaign for the Democratic candidate throughout the state anyway — and in other states.

Connecticut has not backed a Republican presidential candidate since 1988, when state voters help usher former President George H.W. Bush to victory.  That means that in the last seven presidential elections, a majority of Connecticut voters cast ballots for the Democratic candidate.

But a large vote in Connecticut for Biden will have coattails,  helping Democrats in tight state legislative races, Murphy said. And since neither senator is up for reelection, his and Blumenthal’s “surplus energy” can be used to try to win support for Biden in key swing states like Michigan, Wisconsin, Pennsylvania, Florida, North Carolina, and Arizona.

That’s why they are helping the former vice president’s Connecticut campaign recruit volunteers for a phone bank aimed at persuading voters in battleground states to vote for the Biden-Harris ticket.

“We can walk and chew gum at the same time,” Murphy said.

Blumenthal said Democrats are in competitive races for seats in the state legislature in Hamden, Greenwich, Stamford and southeastern Connecticut, and like Murphy he’ll continue to campaign for those Democrats – as well as for Biden in battleground states.

Both cautioned that while Connecticut has been placed firmly in the “blue” column for Biden, they aren’t complacent.

“We expect a good result in Connecticut, but we can’t take that for granted,” Murphy said. 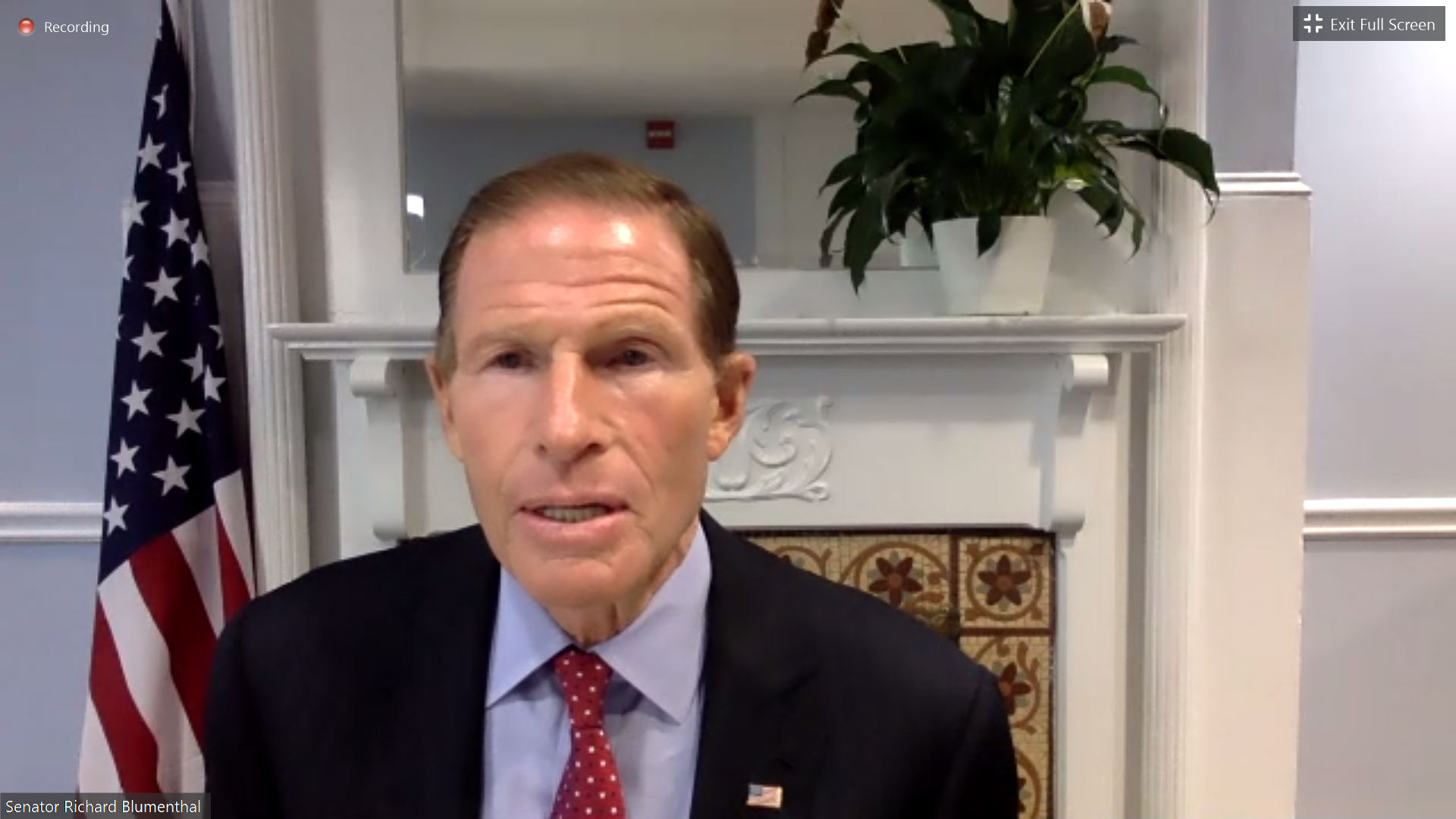 The Biden campaign phone bank will operate two days a week and include “headliners,” or prominent Democrats.  Blumenthal was Tuesday’s headliner. Ninety volunteers joined the senator at Tuesday night’s phone bank. Their target was Florida voters.

On Thursday, Lt. Gov. Susan Bysiewicz will handle the phones. Each session will target a different swing state.

To Blumenthal and Murphy, who held a Zoom press conference Tuesday with Biden for President Connecticut State Director Marc Bradley, this presidential election is the most important one in recent U.S. history.

“This election is really about the future of America,” Blumenthal said. “It is life or death.”

The escalating partisan war over Trump’s intention to replace former Supreme Court Justice Ruth Bader Ginsburg with a conservative jurist has injected an unexpected element into the presidential race.

The impact of the fight over the next Supreme Court justice on the race for the White House is unclear. It could energize voters who want the Supreme Court to overturn Roe v Wade, or drive more Democrats to the polls. Some independents who like Trump’s economic messaging may also be turned off by the prospect of a Supreme Court that rolls back abortion rights and protections for the LGBTQ community.

Democrats like Murphy and Blumenthal are continuing to attack Trump for what they say is a dismal response to the coronavirus pandemic.

Murphy noted that more than 200,000 Americans have now died in the pandemic and said “200,000 more might die” if Trump is re-elected. “And that’s a best-case scenario,” he said.

Blumenthal said “this election will be about how Donald Trump has failed America.”

Democrats are also attacking Trump for backing a Republican challenge to the Affordable Care Act that will be considered by the Supreme Court, with arguments in the case scheduled for next month.

Murphy said that in Connecticut “people can’t even remember the day” when insurers were allowed to discriminate and bar people with pre-existing health conditions from coverage.