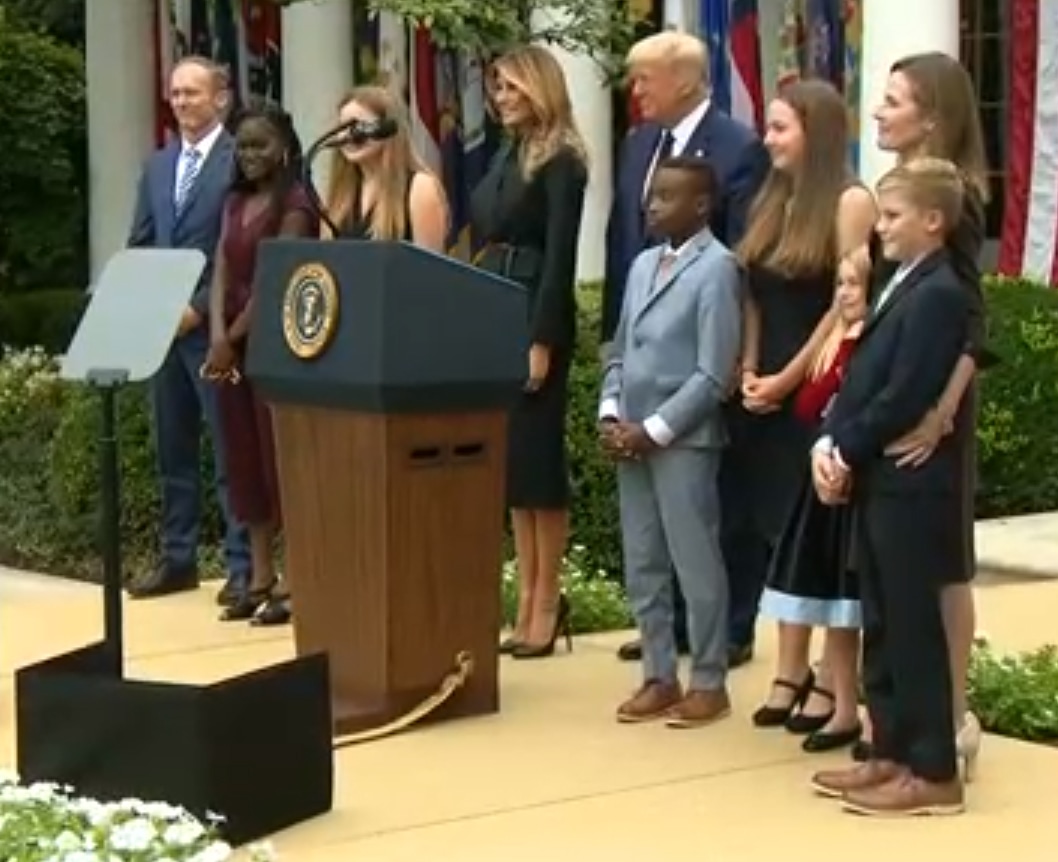 “I have no illusion that the road ahead of me will be easy,” Barrett said. “Either in the short term or the long haul.”

She briefly sketched out her approach to the job: “A judge must apply the law as written,” she said. “Judges are not policymakers, and they must be resolute in setting aside any policy views they may hold.”

Connecticut Sen. Richard Blumenthal is among the Democrats who have already said they will not meet with Barrett before her confirmation hearing. It’s not the first time Barrett, 48, faces strong opposition from Senate Democrats, including Blumenthal, who as a member of the Senate Judiciary Committee vigorously fought her ascension to a seat on the Chicago-based 7th U.S. Circuit Court of Appeals in 2017.

Back then, Blumenthal pressed Barrett at her confirmation hearing on whether she believed Roe v Wade, the landmark abortion rights case, should be overturned.

Barrett, like most judicial nominees who are asked that question, avoided a direct response.

Blumenthal continued to press the nominee, asking if the overturning of Roe v Wade would cause what he described as a  “massive disruptive hurtful effect on countless women who continue to rely on its protection.”

Blumenthal asked Barrett about a speech she gave to University of Notre Dame students in 2013 in which she said if Roe v Wade were overturned, the states and Congress would be free to ban, protect or regulate abortion as they saw fit.

“You suggest overturning Roe would have little effect,” Blumenthal said.

Barrett said the context of her remarks was that she was addressing a question about  protests over Roe v Wade. She said she was trying to tell students in the audience who were interested in protesting that it might not be “fruitful,” and was “not commenting on the impact that Roe would have.”

Blumenthal pressed on. “Do you think Roe v Wade was correctly decided?” he asked

Barrett responded that  “I feel that I can’t as  a nominee offer an opinion on the rightness or wrongness of a precedent.”

“I don’t want to give the impression that I would treat some precedents as more binding or more valuable than others,” she added.

Her confirmation, virtually guaranteed in the GOP-controlled Senate, would shift an already conservative Supreme Court further to the right. Her nomination is thought by many to be aimed at bolstering President Donald Trump’s support among those who oppose abortion.

Barrett’s 2017 candidacy was controversial and she was confirmed through a largely party line vote, with both Blumenthal and Sen. Chris Murphy voting “no.”

Blumenthal said this time around, his opposition to Trump’s pick to replace Ginsburg is founded on something besides the character and qualifications of the nominee.

“There is no legitimacy to the process,” he said.

He said he would oppose any nomination because it comes just weeks before the Nov. 3 election.

“The American people should have a say,” Blumenthal said, especially since voting has already begun in many states.

He accused Senate Republicans of “dragging the Senate through the mud” by pushing for Barrett’s confirmation by Election Day, the fastest confirmation process for a Supreme Court justice in recent history.

Murphy also strenuously opposes the nomination. A stanch defender of the Affordable Care Act in the Senate, Murphy said Barrett’s confirmation to the Supreme Court would mean that “millions of people I represent in Connecticut will be kicked off their health care plans, in the middle of a global pandemic.”

The Supreme Court is scheduled to hear a challenge to the ACA on Nov. 10. If confirmed before the election, Barrett would be a deciding vote on that case.

“Senate Republicans are predictably reneging on their pledge from four years ago of not appointing a Supreme Court justice during an election year, in order to rush Coney Barrett onto the court in time to end health care for millions,” Murphy said.

Trump’s announcement begins a process that is almost certain to result in Barrett’s confirmation.

The judge must undergo an FBI background check, although that process could be streamlined because she was scrutinized by the FBI in 2017 as a Circuit Court candidate. Barrett must also answer lengthy questionnaires posed to her by the Senate Judiciary Committee.

The Senate Judiciary Committee plans to hold four days of hearings on Barrett’s nomination beginning Oct. 12.  The panel will then hold a “business meeting” to vote on the nomination a week afterwards. But it’s likely that meeting could be held over an additional week to give senators more time to submit written questions and consider the responses.

So, a Senate vote on Barrett’s confirmation would come at the end of October, just days before the Nov. 3 election.

A hero to the religious right

Barrett was on the short list to fill the vacancy created by the retirement of Justice Anthony Kennedy in 2018. Although that seat was eventually filled by now-Justice Brett Kavanaugh, Trump told advisers he was “saving” Barrett in case Ginsburg stepped down during his presidency.

Barrett became a hero to many religious conservatives after her 2017 confirmation hearing for her seat on the court of appeals when Democrats grilled her on the role of her Catholic faith in judging.

Barrett co-authored a 1998 law review article that argued Catholic judges should recuse themselves from certain death penalty cases because of the dilemma posed by the church’s opposition to capital punishment. And in a 2012 blog post, a colleague on the Notre Dame Law School faculty quoted from a transcript of a talk in which Barrett allegedly said, a “legal career is but a means to an end…and that end is building the kingdom of God.”

More recently Barrett’s membership in People of Praise, a tight-knit Christian group, has become an issue. The New York Times has reported that People of Praise “grew out of the Catholic charismatic renewal movement that began in the late 1960s and adopted Pentecostal practices such as speaking in tongues, belief in prophecy and divine healing.”

Raised in Metairie, La., outside of New Orleans, Barrett is the daughter of an attorney for Shell Oil and a stay-at-home mom. Barrett attended St. Mary’s Dominican High School for girls, then graduated with honors from Rhodes College in Tennessee and received a law degree from Notre Dame Law School.

Barrett is married to Jesse Barrett, a former prosecutor now in private practice. The couple has couple has seven children, one with Down Syndrome and two adopted from Haiti.

In announcing her candidacy, Trump noted Barrett “is the first mother with school aged children ever to serve in the Supreme Court.”

During her three years on the federal bench, Barrett has written that the Second Amendment did not necessarily ban people convicted of felonies from owning a gun and voted to support Trump’s “public charge” rule, which places new barriers for  immigrants seeking green cards or citizenship if they rely on public benefits, food stamps or housing vouchers.