Anybody saying their use increases voter fraud 'is spreading a fiction.' 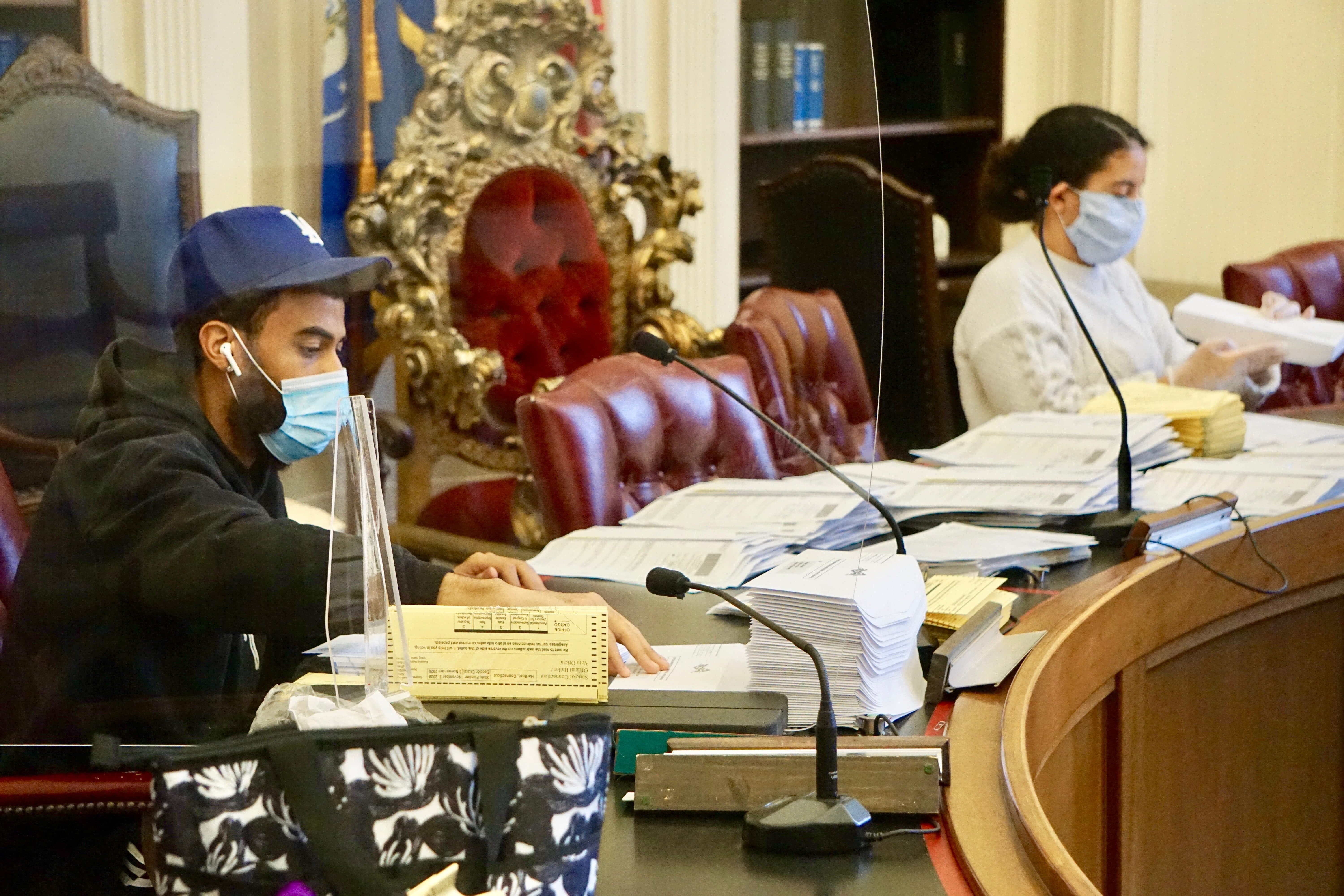 Gov. Ned Lamont and Hartford Mayor Luke Bronin used a ceremonial bill signing Friday to promote the security of voting by absentee ballot in the COVID-19 pandemic and to counter President Donald J. Trump’s false claims that mail-in voting is rife with fraud.

“Anybody who is making the argument that absentee ballots increase voter fraud is spreading a fiction, and it is not an innocent fiction,” Bronin said. “It is a fiction designed to sow distrust and to call into question the legitimacy of our election. And it’s not acceptable.”

Lamont signed a bill that permits town clerks to begin processing absentee ballots on the Friday before the election, a change intended to speed the counting of votes in an election that is guaranteed to see a record number of absentee ballots. (Lamont on Friday signed all nine bills passed in a special session this week.)

“Absentee balloting has become a bit of a partisan issue in Washington and in other parts of the country,” Lamont said. “I see that the governor of Texas just tried to limit the number of boxes where you can drop the ballots remotely. And that’s not true here in Connecticut.”

Texas Gov. Greg Abbott, a Republican, ordered that only one ballot box be available in each of that sprawling state’s counties, prompting a lawsuit Friday accusing him of voter suppression. By contrast, the 18-square-mile city of Hartford has five ballot boxes.

Absentee ballots can be returned to town clerks in Connecticut by mail or dropped off at one of the secure boxes available outside every town hall in the state.

The legislation signed by Lamont, a Democrat, was passed 35-1 in the Senate and 139-5 in the House. The half-dozen no votes were cast by conservative Republicans, but the vast majority of GOP lawmakers voted with Democrats in favor of the legislation.

“I really appreciate that here in Connecticut, to make it easier to vote safely and honestly has been a bipartisan effort. And that makes a big difference,” Lamont said. 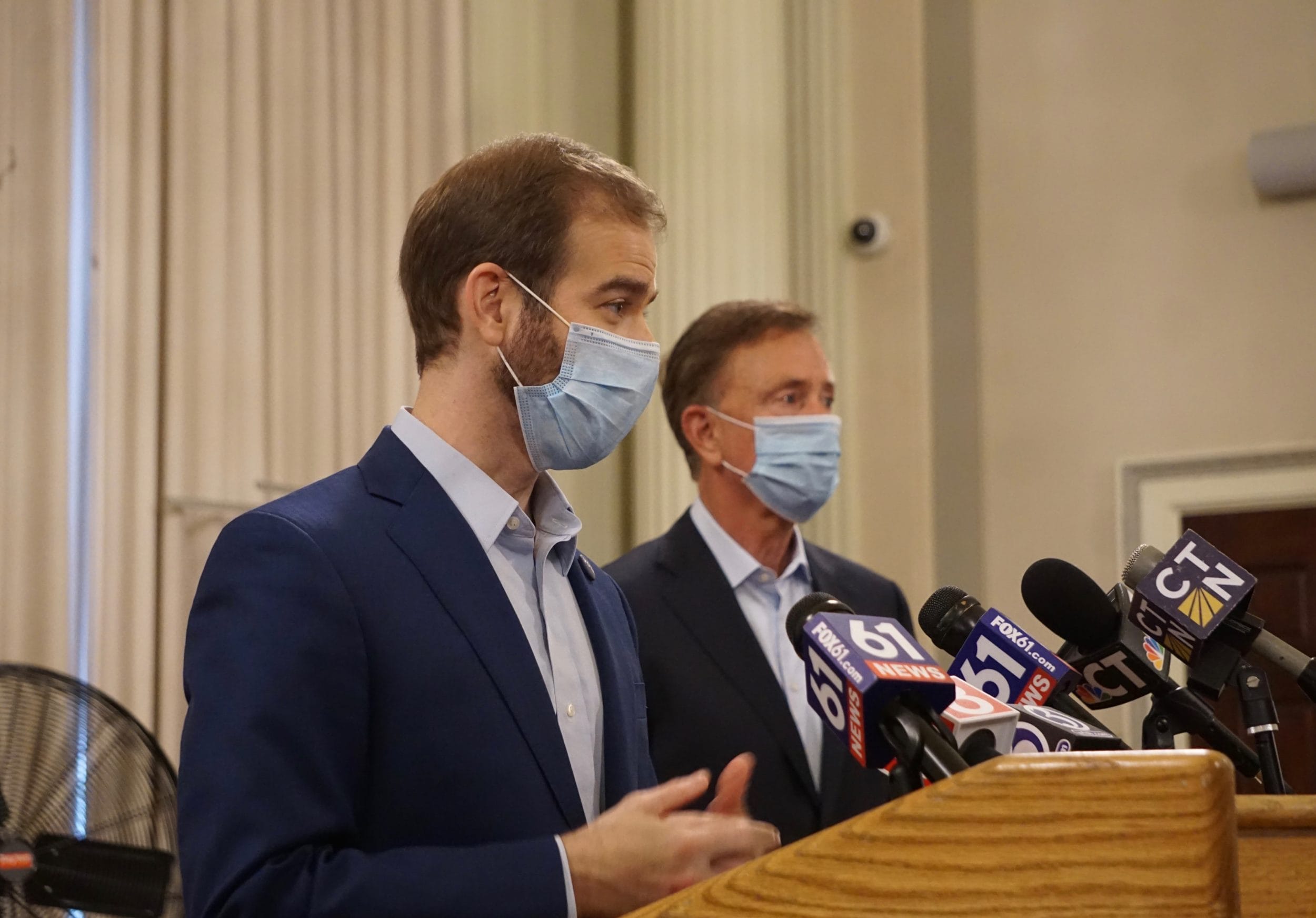 The masks stayed on Friday when Hartford mayor Luke Bronin and Gov. Ned Lamont got to the microphone.

Lamont conducted the brief ceremony at City Hall in Hartford, where a team of 15 temporary workers had taken over the spacious council chambers to prepare absentee ballots for mailing to voters. Friday was the first day they could be mailed.

Noel F. McGregor Jr., the town and city clerk, said 5,000 ballots would go out Friday and another 4,000 were being processed.

Nationally, one in every four votes was cast by absentee ballot in the past two federal elections, but not in Connecticut. The state normally restricts the use of absentee ballots to voters who will be physically unable to get to the polls.

But a law passed in July allows anyone to vote by absentee this year if they are concerned about going to the polls in a pandemic.

Anna Posniak, the Windsor clerk and president of the Connecticut Town Clerks Association, outlined the steps required to validate the legitimacy of a ballot, the signature of the voter on an inner envelope, and ensure that no one can vote by absentee and then again at the polls.

The inner envelope containing the ballot cannot be opened and counted until 6 a.m. on Election Day, the same time the polls open.

An online statewide voter registration list is consulted to ensure the voter is registered in only one community. An “A” is placed next to a voters name on the list workers use at the polls to determine if they already have voted by absentee or if they are eligible to receive a ballot.

If mailed, ballots must arrive at the local clerk’s office by Election Day. Ballots can be dropped off until the close of the polls at 8 p.m. on Election Day. Those are not counted until workers confirm that those voters were not also checked off as voting in person.

About 2% of absentee ballots are rejected, usually because a voter neglected to sign the outer envelope. Voters can check on the secretary of the state’s web site whether their ballot has been received. The address is https://portaldir.ct.gov/sots/LookUp.aspx

Every voter in the state was mailed an unsolicited absentee ballot application. No ballots will be mailed to a voter who has not returned an application.

“We are anticipating that we will receive back far fewer ballots than what we actually issue out because people are using the absentee ballot as a tool to be able to have a back-up plan in case they find themselves quarantined a week ahead of the election,” she said.

The president has warned of chaos from the heavy use of mailed-in ballots. Bronin said their use is hardly novel, but the volume will cause some delay in counting.

“We may not get results as fast as we normally do,” Bronin said. “But that’s a pretty small tradeoff to allow every Connecticut resident the ability to vote safely, securely, conveniently in this election, in every election.”

Correction: The story as originally posted incorrectly described which envelope voters must sign in returning an absentee ballot. It is the inner envelope.