Biden expected to win Connecticut’s Latino vote, but could face an enthusiasm gap 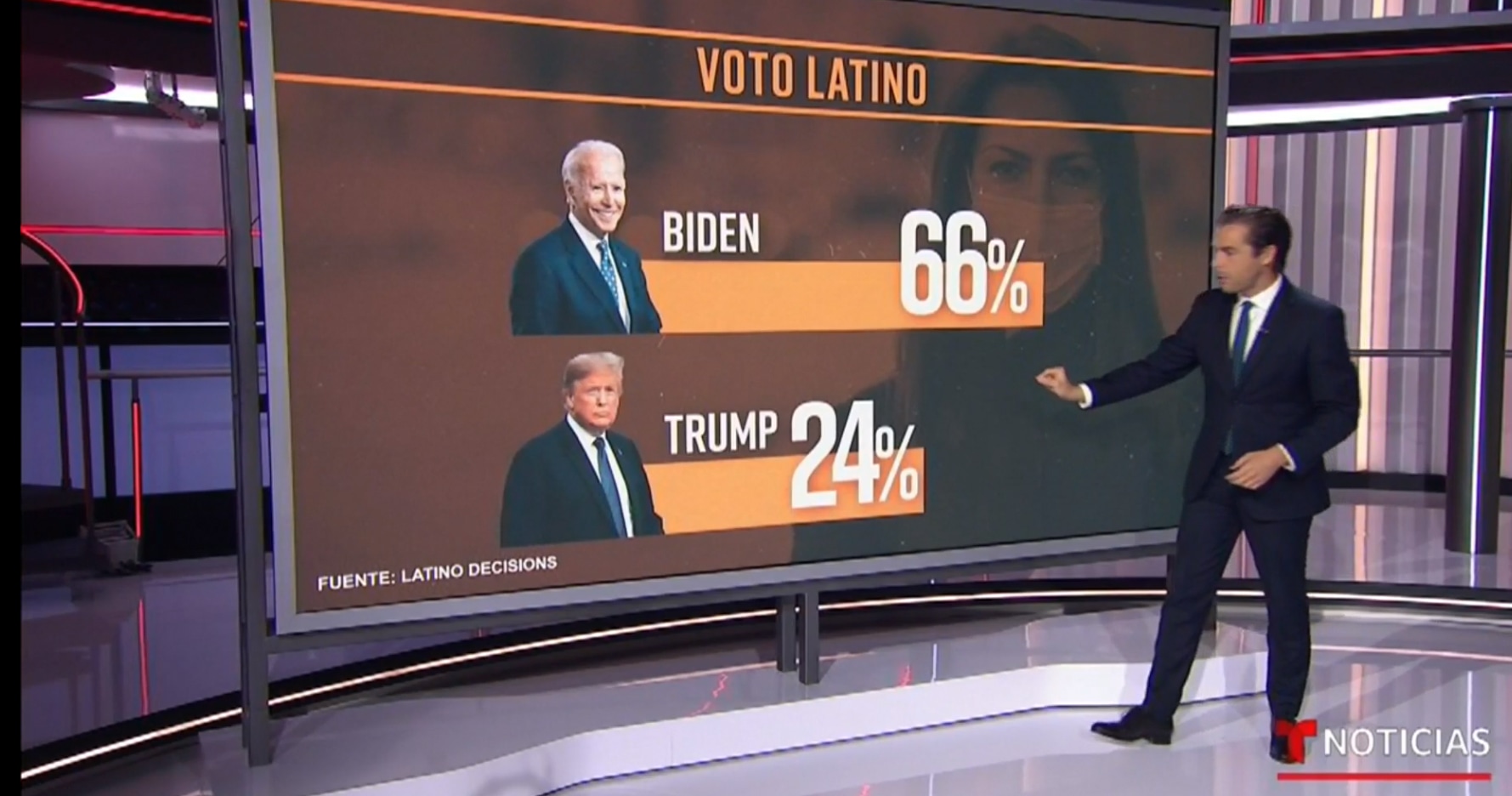 Spanish-language media is reporting that Biden is heavily favored by Latinx voters. But his Connecticut supporters say he could be doing more.

The majority of Connecticut’s Latino voters are expected to favor Vice President Joe Biden in November, but the Democrat may find less support than he expected from a community that sees him as “out to lunch” when it comes to Hispanic voters.

He said Biden is running a traditional Democratic campaign with some outreach to Latino voters – but not enough.  “They must feel that they are being wooed,” Regalado said.

He also said the Biden campaign has been “dangerously out to lunch” when it comes to Latino outreach and that failure should “ring alarm bells” in the campaign.

This election, Latinos are expected to be the largest group of minority voters, surpassing Black Americans for the first time.

Nonetheless, Regalado said Biden, who is already enjoying overwhelming African American support, chose to focus his campaign in battleground states on winning back white, working-class voters who supported former President Barack Obama but then voted for President Donald Trump in 2016. Latino communities seemed to be barely an afterthought, he said. 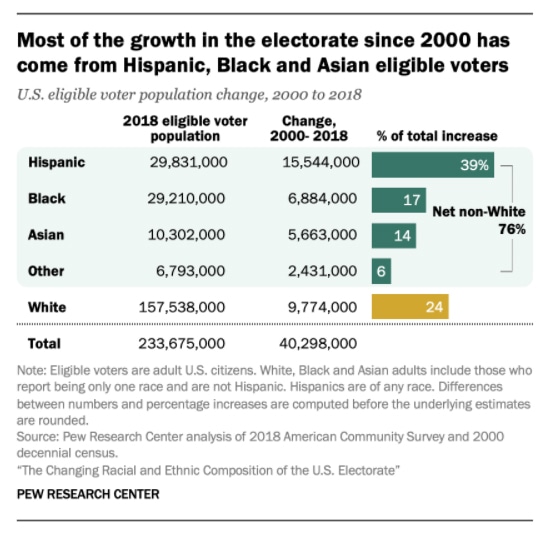 A poor showing by Latinos for Biden in Connecticut may not mean much, since he’s expected to carry the state. But Regalado said a Biden “enthusiasm gap” could keep a loyal Democratic demographic from voting in state assembly elections, where they could make a difference.

Nationally, Latino votes could be key for Biden in crucial battleground states such as Florida, Arizona, Michigan, Nevada, Pennsylvania, Wisconsin and Ohio.

Regalado said Latinos in swing states will favor Biden over Trump. “But will they be in the numbers he needs?” he asked.

A Latino Decisions/National Association of Latino Elected and Appointed Officials poll released in mid-September showed that 65% of Latinos plan to vote for Biden or lean toward him. But this was still 14 percentage points lower than the 79% of Latino voters who said they supported Clinton in the pollster’s national election-eve poll in 2016.

‘Reaching the Latino heart and soul’

The Biden campaign says it’s doing a good job of reaching out to Latinos.

It points to its “Latino agenda,” a plan that would invest in the community’s economic mobility, end racial disparities through investments, quality education, battling hate crimes and gun violence, as well as an overhaul of the immigration system.

Jennifer Molina, who grew up in Bridgeport and is the Biden campaign’s national Latino media director, said “We don’t take the Latino vote for granted.”

She said the campaign placed Spanish-language ads in swing state markets as early as June that were tailored to the diverse Latino communities whose votes could make a difference.

For instance, Molina said, the ads that ran in South Florida featured speakers with Cuban accents, since Cuban-American concentration is high there, while the ads in the Orlando area and in Pennsylvania used Puerto Rican speakers to get their point across. And in Arizona, the Spanish accents are Mexican.

One ad, titled “Somos Alguien” or “We are Somebody,” attacks Trump’s handling of the coronavirus pandemic and focuses on the disproportionate number of Hispanics who have contracted and died from COVID-19. Trump has also put up some Spanish-language ads, but they began running just last month.

Molina also said that “knowing how young the Latino voting bloc is, we have heavily invested in digital.”

Biden “is fighting for every vote,” she said.

Fernando Betancourt, a political analyst and former executive director of Connecticut’s Latino and Puerto Rican Affairs Commission, said television advertising is not enough to win the hearts and minds of the nation’s Latinos,  who prefer to meet candidates face-to-face, attend large events and rallies, and respond well to door knocking.

But the pandemic has hampered Biden’s ability to campaign in this traditional manner, Betancourt said,

The coronavirus, however, did not stop Trump from holding large rallies — until the president became infected. That has leveled the playing field, at least for a couple of crucial weeks before Election Day.

“I think he’s not penetrating the same way that Barack Obama or Hillary Clinton did among Latinos,” he said.

Latino voter registration is growing, although they have a poor record of showing up at the polls. That’s because the Latino population trends young, and some, though newly registered (in some cases automatically when they get a driver’s license) don’t vote.

Betancourt says voter apathy in the community is “inching away” a little bit more each election. “But it’s still not on par with everyone else,” he said.

Yanil Terón, executive director of the Hartford-based Center for Latino Progress, said neither Trump nor Biden were paying much attention to Latino votes until recently. That’s when Trump promised Puerto Rico nearly $13 billion in federal disaster funding to repair its electrical and education infrastructure — three years after Hurricane Maria’s devastation and six weeks before the presidential election.

The move is viewed as an effort to appeal to Florida’s Puerto Rican voters. But Terón said the late help to Puerto Rico is “pathetic.”

Trump is also actively courting Latino votes in Nevada, and even Minnesota.

Besides a campaign blitz targeting Latinos, there is another factor that could help Biden. That’s Trump’s selection of federal appeals court Judge Amy Coney Barrett to replace the late Justice Ruth Bader Ginsburg on the Supreme Court.

The choice of Barrett over Cuban-American Judge Barbara Lagoa disappointed a unique segment of the Latino community – Florida’s Cuban Americans – who traditionally have voted Republican in presidential elections.

Barrett’s support for Trump’s “public charge” rule in a court decision is also troubling to Latinos. The public charge rule makes it harder for low-income immigrants who use public services to obtain a green card or residency.

There’s also concern about how she would vote on a case concerning “Dreamers,” young immigrants who were brought to this country by their undocumented parents as infants and children and were given temporary protected status by the Obama administration.

“After Ruth Bader Ginsberg’s passing, we all held our breath to see who Trump would pick as his Supreme Court pick,” said Camila Bortolleto, of CT Students for a Dream. “Barely a week after, he picked the anti-immigrant and anti-choice Amy Coney Barrett.” 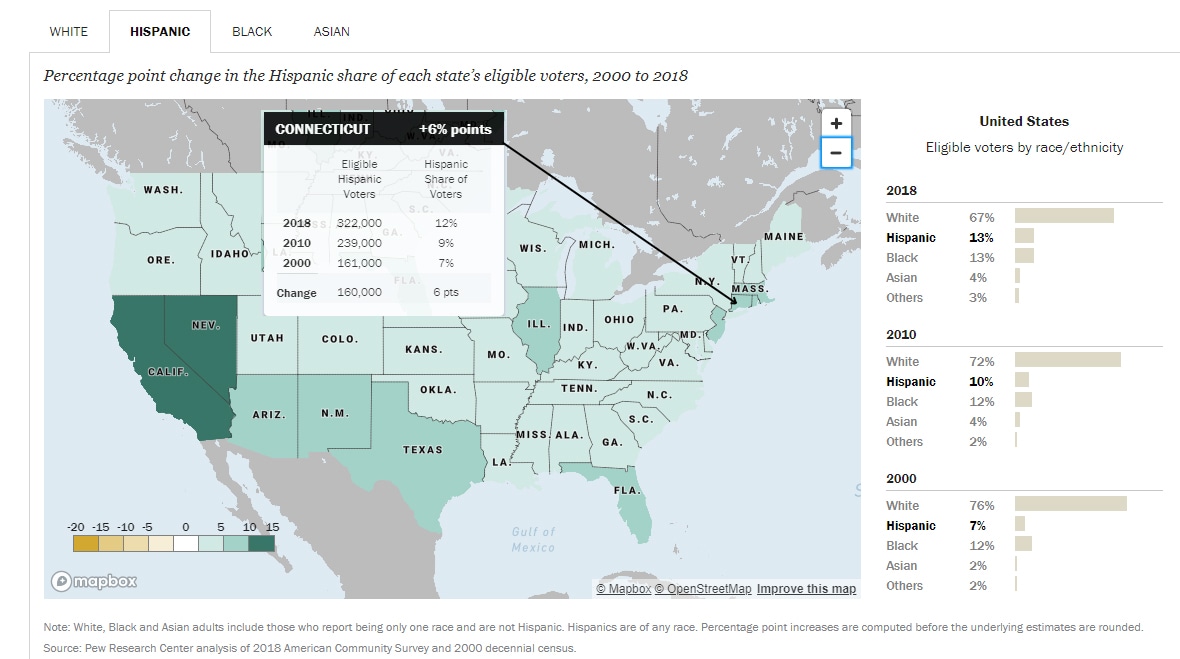 Bortolleto said “most folks know about Judge Amy Coney Barrett’s views on restricting access to affordable health care and to reproductive rights. But many don’t know that she has an anti-immigrant record,” citing her sole vote on a three-judge panel to support Trump on the public charge rule.

Regalado said immigration is an important issue for Latinos, but at the top of their concerns is health care, especially since Latinos has been disproportionately victimized by COVID-19.

He said Biden should stress that if Barrett is confirmed before Nov. 10, she will hear arguments in a case that could result in the repeal of the Affordable Care Act. But he said Biden “has got to make the case in language that is understood,” that is, by speaking directly to the nation’s Latinos about what the repeal of the ACA would mean for them.

A Latino Decisions poll released this week showed that 67% of Latinos agreed with the statement, “The Senate should wait until after the election and let the next president make the nomination.”

Latinos were also asked if they would be more likely to support one of the presidential candidates if the Senate confirms Barrett.  Over half of respondents (56%) said the confirmation  would boost their support for Biden. A greater percentage of Latinas – 58% —  said Trump’s choice to replace Ginsburg made them more likely to vote for Biden.

“Like Black women, Latinas have the power to mobilize their families and the wider community,” said Adrian Pantoja, a senior analyst with Latino Decisions. “If the Democrats draw on Obama’s strategy of leaving nothing to chance, they will use this moment to help secure the vote of undecided Latinas, and in doing so they will likely capture the vote of the wider Latino community.”