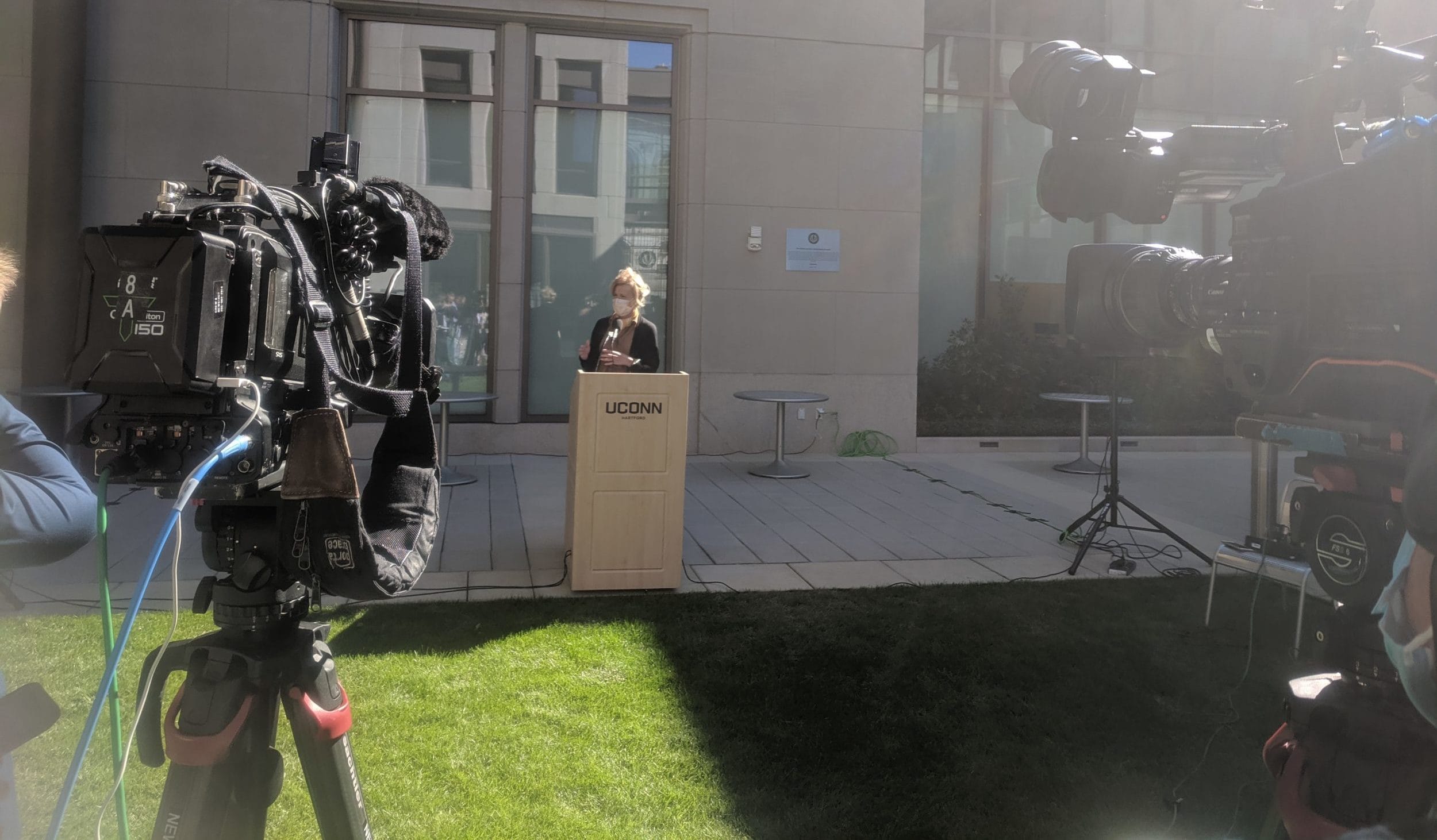 On the day Connecticut relaxed restrictions on restaurants, concert venues, hair salons and places of worship, the White House’s coronavirus coordinator came to Hartford with two messages: The recent uptick in cases in Connecticut and across the Northeast is worrisome, and the virus spread is coming from small, informal gatherings.

People are more likely to wear masks and socially distance at church or other public venues, Dr. Deborah Birx told reporters Thursday after meeting at UConn’s Hartford campus with Gov. Ned Lamont and state health and education officials. It’s when people let their guard down in private settings that the virus is more likely to spread.

“What we’re seeing in the community is much more spread occurring in households and in social occasions, small gatherings where people have come inside, taken off their masks to eat or drink or socialize with one another, believing that that friend down the street, or the friend from out of town, or that family member who came in, certainly could not have COVID because they look fine,” Birx said.

Birx said federal officials decided to visit cities in the Northeast after seeing “troubling signs.” In addition to Hartford, Birx and her team also made stops in Long Island and Providence.

“We do see slight upticks and test positivity, slight upticks in cases and that often is just the earliest indicator that there’s ongoing asymptomatic spread in the communities,” she said. “So to all the people of Connecticut out there, really, if you’re gathering together indoors, assume someone in that group that’s outside of your family household could be positive and wear your mask and continue to physically distance.”

Birx pointed to contact tracing research in the South and in Utah that shows the virus is spreading in these small gatherings “when people let down their guard.” In Utah, for example, she said public health officials have traced 80% of the infections to such get-togethers and only 5% to the workplace.

Birx’s visit both coincided with the day Connecticut moved to the third phase of relaxing its COVID-19 restrictions, and on the day the state issued COVID alerts for New London, Norwich, Windham and Preston, all in eastern Connecticut.

Between Sept. 20 and Oct. 3, New London recorded at least 115 new COVID cases, raising the daily case rate to 30.5 per 100,000 population, according to the state Department of Public Health.

This map will be updated every Thursday.

Lamont said Thursday that a new key metric for tracking local outbreaks would be setting alerts where the case rate was at least 15 per 100,000. He said he was considering giving local elected officials the option to remain at Phase 2 of the state’s COVID restrictions if their communities exceed that 15-case threshold.

“We’re thinking out loud with you,” Lamont said at a late afternoon briefing.

Dr. Deidre Gifford, the acting commissioner of public health, said contact tracing in those communities tracked the spread to the informal gathering, consistent with the findings highlighted by Birx.

Gifford recommended anyone in those four communities get tested, even if they are asymptomatic. The state has increased the availability of tests in the affected communities as part of an effort to stem the outbreaks, as state and local officials did in Danbury.

“We can turn these outbreaks around,’ Gifford said.

Josh Geballe, the state’s chief operating officer, said Connecticut conducted 136,000 COVID tests in the past seven days, an all-time high since the novel coronavirus was first detected in the state seven months ago.

There were 384 new cases reported Thursday, as well as five more deaths. The state now has recorded 4,527 COVID-related deaths. Hospitalizations dropped by 10 to 128. The positivity rate for testing was 1.41%, roughly the same as the rolling seven-day average.

Under phase 3, indoor dining at restaurants can increase from 50% to 75% of capacity, as is the case for libraries, hair salons and personal services. Indoor performance-arts venues can reopen at 50% of capacity with requirements for masks and social distancing. Banquet halls and other commercial event venues will be able to use 50% of their capacity, capped at 100 people indoors and 150 outdoors. Indoor graduations and religious services are capped at 200 in phase 3. 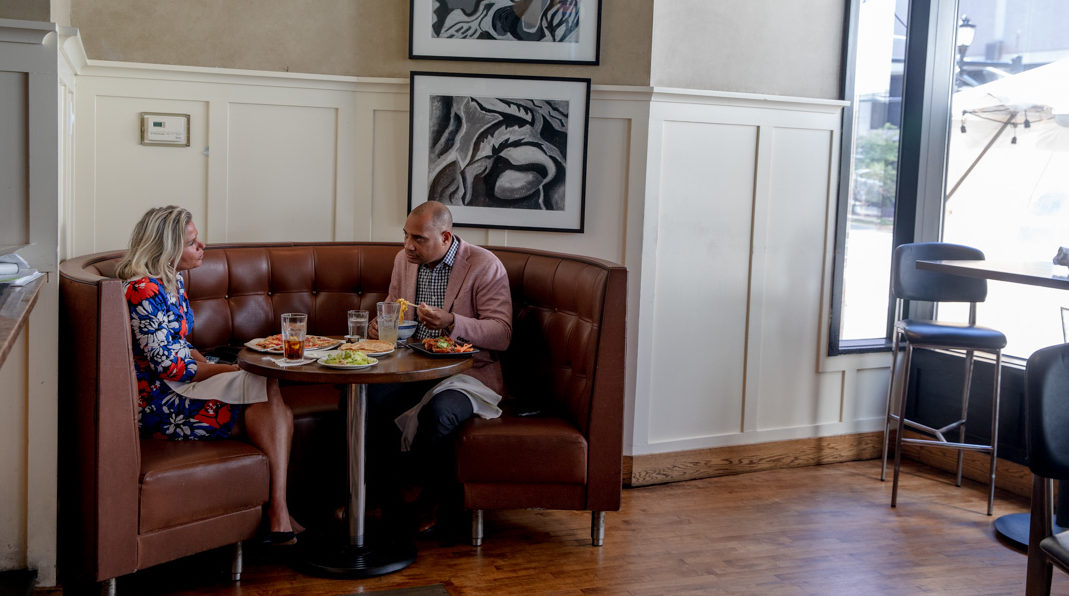 Lamont said Birx advised him of the greater risk of informal social events.

“It’s just fascinating,” Lamont said. “It’s not at the workplace, not in the restaurant, not in the classroom. It’s when you get out of church and you hug your friends. It’s the Thanksgiving dinner at home. Eighty percent of the infections in Utah, which is on fire, all happened in informal social gatherings. That was her message, which resonated with me.”

Lamont smiled and added, “I didn’t bring up Trump.”

But the Connecticut press corps did when Birx took questions after their private meeting.

Asked whether President Donald Trump has undermined her message through some of his actions, such as when he mocked former Vice President Joe Biden for wearing a mask and tweeted earlier this week saying “don’t be afraid of COVID,” Birx said she offers Trump the best advice she can about the seriousness of the virus.

“I think we have unity in the advice to the American people. It’s the same advice that I give to the president and the vice president, [which] is we have a way to control this virus. And we know what it is. Physical distance, wearing a mask, personal hygiene, and also critically ensuring that we carry [out] those activities both in public and in private if we’re with individuals that are not part of our normal, every day family,” she said. “The White House knows what my message is, And they are promoting me to be out here with you all to tell you this message, that there’s an evidence base about masks, and I could go through all that. Let me be very clear, we know how effective these are.”

Asked whether Connecticut residents should be afraid of COVID-19, Birx said the virus is more serious because it can be spread by people not showing systems.

“I take all infectious diseases very seriously… I have a deep respect for this particular virus, because of its level of asymptomatic contagion,” she said.

So has she spoken with Trump about his messaging?

“I’ve been on the road, so I have not been in conversations with the administration while I am on the road. I would certainly not engage with leaders when they are battling an illness at this time. He has a whole team responsible for his illness and I’m not part of that team,” she said.

“I think [what] the White House is wanting me to do and [has] had me doing since June is carrying the message of how we protect one another and how we can stop the spread of this virus and I was particularly nervous about the Northeast, because I want to make it very clear what we did in the spring is not going to work in the fall,” she added. “And so this sense that the spread is out there in workplaces and institutions is not going to be adequate. The spread is within our communities and it’s within the things that we do with one another without a mask on.”