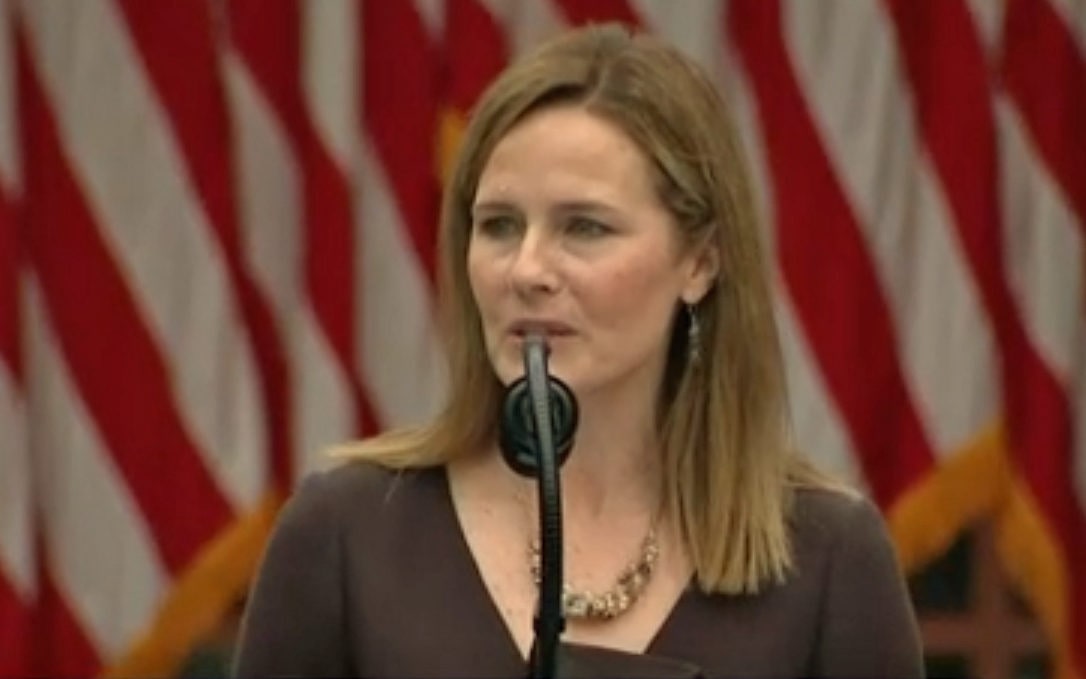 Washington – Connecticut Sens. Richard Blumenthal and Chris Murphy have taken the lead in attacking Judge Amy Coney Barrett on her Second Amendment views, which the senators call “extreme” and “radical.”

Barrett, President Trump’s choice to replace the late Justice Ruth Bader Ginsburg, will face challenges from Senate Democrats from many directions. While much of the grilling of Barrett during her confirmation hearings next week will focus on the nominee’s views on abortion and the constitutionality of the Affordable Care Act, the judge, who sits on the 7th U.S. District Court of Appeals based in Chicago, will also have to answer for a controversial dissent she issued last  year.

That dissent flies in the face of  efforts of Connecticut’s Democratic senators to strengthen FBI background checks of potential gun buyers and fuels their efforts to persuade Americans that Barrett is unfit for the high court.

The controversial dissent involves the case of Rickey Kanter, who is challenging laws that ban convicted felons from possessing firearms. Kanter pleaded guilty to federal charges of falsely representing that his Wisconsin-based company’s therapeutic shoe inserts were Medicare-approved and for billing Medicare on that basis. Both federal law and Wisconsin law bar a convicted felon from possessing a firearm.

Kanter sued the federal government and the state of Wisconsin to challenge both bans, arguing that they violated his Second Amendment rights.

The appeals court rejected his claims, but in Barrett’s lengthy dissent, she maintained that historical evidence supports the position that only those “who have demonstrated a proclivity for violence or whose possession of guns would otherwise threaten the public safety” may be legally prevented from a lifetime ban on owning a weapon.

In their decision, the other two judges said Congress and the Wisconsin legislature are entitled to categorically disqualify all felons —even nonviolent felons like Kanter — because both have found that such individuals are more likely to abuse firearms.

1/ In light of Amy Coney Barrett’s dangerous views on choice and the ACA, her views on guns haven’t gotten much attention.

But she’s a radical – a blinking red outlier – on how she interprets the 2nd Amendment. Like, she wants felons to buy guns.

And you need to know. A THREAD:

“She is extreme on this issue,” Blumenthal said of Barrett during a Thursday virtual press conference with Murphy and gun control advocates.

Blumenthal said Barrett is “no Scalia,” a reference to the late Supreme Court Justice Antonin Scalia, whom the nominee considers her mentor. “She would go much farther on this issue,” the senator said.

Scalia said the ruling in the landmark case involving Washington D.C.’s tough gun laws, District of Columbia v. Heller, that recognized the right of individuals to possess firearms, “should not be taken to cast doubt on long-standing prohibitions on the possession of firearms by felons.”

In her dissent in the Kanter case, Barrett also said the state of Wisconsin failed to demonstrate the felon ban resulted in less gun violence.

Murphy said the dissent “sticks out like a sore thumb” and that Wisconsin had provided proof of the ban’s effectiveness, but Barrett preferred to give credence to NRA studies on the issue.

“She is seeking a position on the Supreme Court to legislate her radical views into existence,” Murphy said.

Barrett’s confirmation would tip an already conservative court further to the right. Gun control advocates, who have enjoyed victories in the courts and state legislatures, including Connecticut’s general assembly, since the 2012 Sandy Hook mass shooting, are concerned Barret would help create a solid voting bloc, along with Justices Neil Gorsuch, Samuel Alito, Brett Kavanaugh and Clarence Thomas, that would roll back some of those wins. 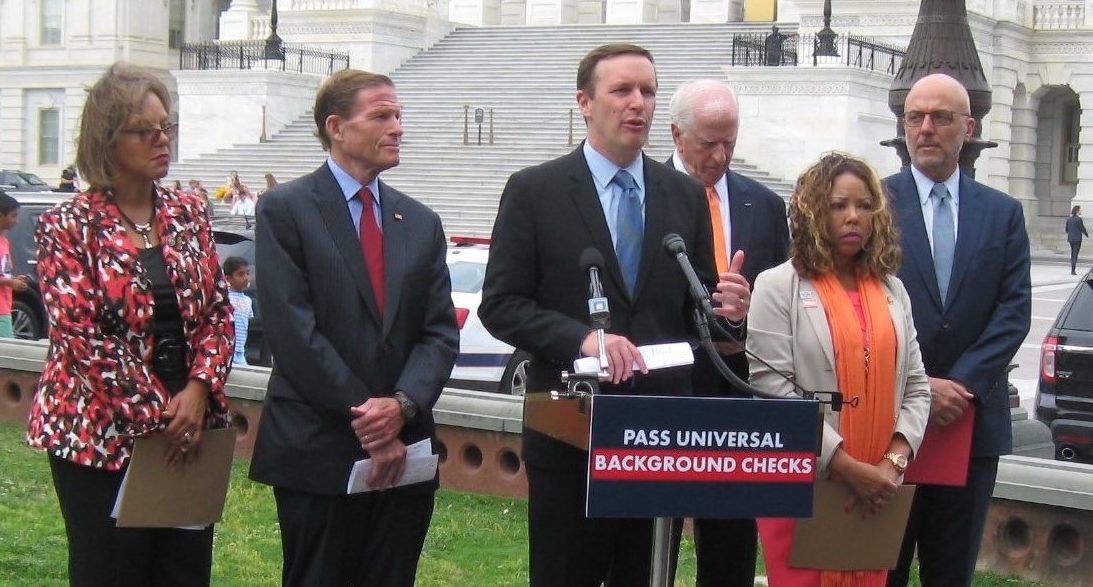 Sens. Richard Blumenthal and Chris Murphy have been leaders in pressing Congress to tighten gun laws since the 2012 massacre at Sandy Hook Elementary School.  They are joined by other advocates at a press confernce last year aimed at expanding FBI background checks,  Reps. Mike Thompson, Robin Kelly, Ted Deutch, and Lucy McBath.

Meanwhile, gun rights advocates were heartened by Barrett’s nomination. The National Rifle Association praised the judge’s record and urged the Senate to swiftly confirm her.

Blumenthal, a member of the Senate Judiciary Committee that will hold Barrett’s confirmation hearing next week, said he will argue against Barrett’s approval by telling stories of gun violence from Connecticut, which “has been hard hit by it,” and from other states.

Blumenthal also said he will fight Barrett’s confirmation by criticizing the judge’s embrace of originalism, or seeking to narrowly apply the Constitution according to her understanding of what its framers intended it to mean.

But Connecticut’s senators, members of the minority party in the Senate, said there is little they can do to stop GOP efforts to hold a Barrett confirmation vote before the Nov. 3 elections.

Blumenthal said Republican leaders in the Senate can change the rules to ensure a prompt confirmation.

Two Republicans on the Senate Judiciary Committee, Sens. Mike Lee of Utah and Thom Tillis of North Carolina, have tested positive for COVID-19 and are in quarantine. If Democrats boycott the committee’s vote on Barrett, the panel may lack a quorum.

But there’s nothing stopping committee chairman Sen. Lindsey Graham, R-S.C.  from changing the rule that a quorum is needed for a vote. And the Senate can even schedule a confirmation vote on the Senate floor without a vote of approval of the nominee in the Senate Judiciary Committee.

“We will need every tactic and tool at our disposal,” Blumenthal said of the Senate Democrats who unanimously oppose Barrett’s confirmation. 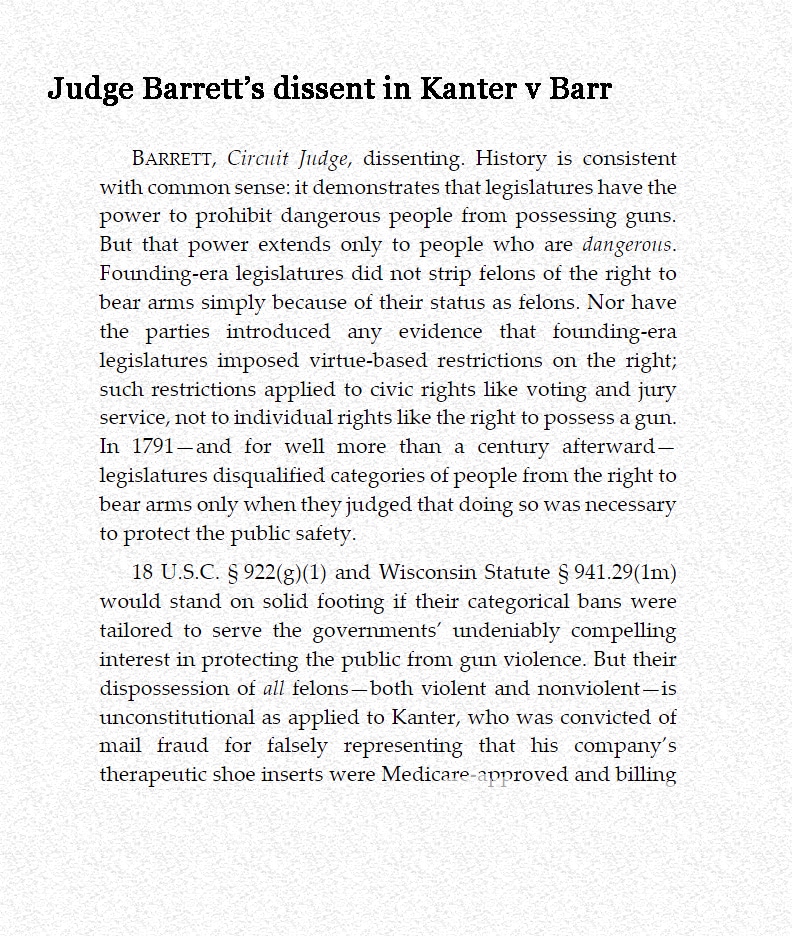