The general election is already here. Here’s a snapshot. 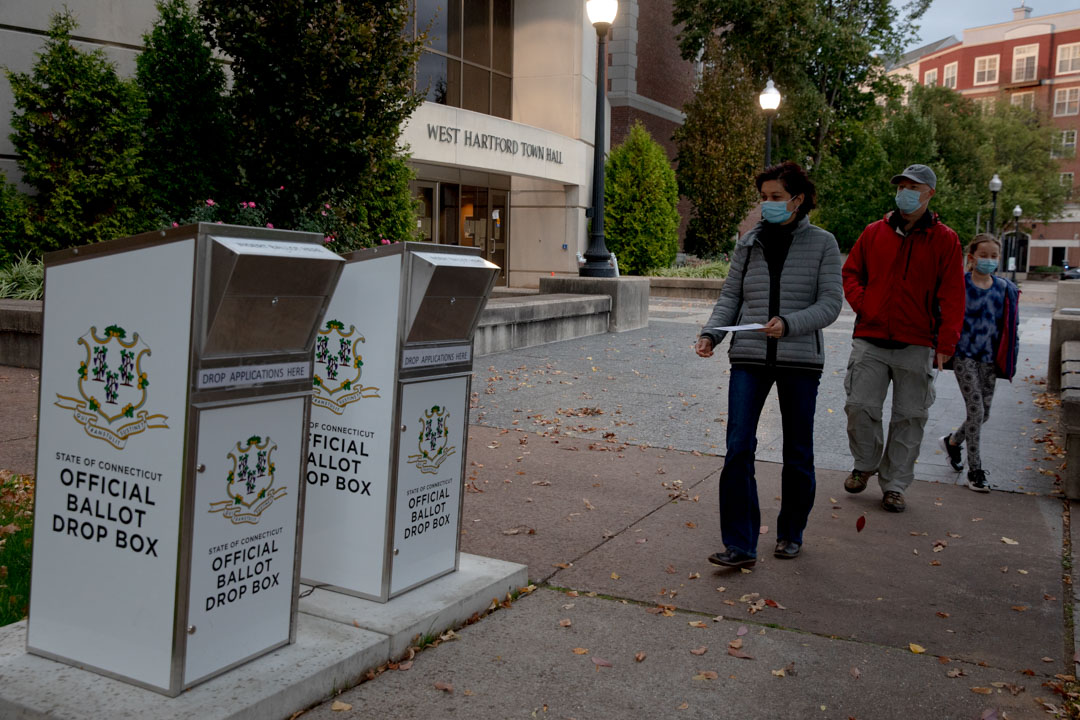 From left, Larisa Yelunina, Scott Barnes and Sophie Barnes, 11, head to the absentee ballot drop boxes to submit their ballots  in West Hartford.

Election day may be 24 days away, but the general election is unfolding right now. Around 3.7% of Connecticut’s 2.2 million registered voters have sent their ballots back to their town clerks as of the close of a tumultuous first week of October.

Since Oct. 2, town clerks across the state have been mailing out absentee ballots to the voters who have requested them. The officials now have 48 hours to mail out a ballot after receiving an application for one.

“The only statutory deadline for submitting an absentee ballot application is November 2 (the day before the election). Obviously, that contemplates handing in the application in person and receiving a ballot that day, something which may not be possible in many towns due to COVID,” said Secretary of the State spokesperson Gabe Rosenberg.

Ballots will be accepted until the polls close on Election Day, Nov. 3, at 8 p.m. They will be counted starting at 6 a.m. that day.

Voters have the option of mailing their ballots back to their town clerks or dropping them off in-person at ballot boxes in their area. When a ballot is mailed back to the town clerk’s office, it is considered first-class mail. Postage is already paid for by the state, Rosenberg said.

Voters “should not delay in returning the ballots to the town clerks well in advance of the election,” said Anna Posniak, the president of the Connecticut Town Clerks Association and Windsor’s town clerk.

“It’s our top priority to do everything we possibly can to safely get people their ballot information” and to promptly return those ballots to election officials, said United States Postal Service for the Northeast Communications Manager Maureen Marion, adding that she recommends that voters familiarize themselves with local election deadlines.

The disparity holds in ballots returned to town clerk offices as well.

The New Haven Independent reported this week that some voters received the wrong ballot in the mail — an error spotted by residents on close inspection of the outer envelope, which lists the name and address of the voter.

Essie Labrot, West Hartford’s town clerk, has received two ballots that cannot be counted because the people filling them out did not put them in the outer envelope. “I talked to a gentleman this morning who thought that because he put it in the box and didn’t put it in the U.S. mail, it wasn’t necessary,” she said. Without the outer, serial numbered envelope, she has no idea whose ballots she has. And she has no way of letting them know that they made a mistake.

Voters can look up the status of their ballot applications and ballots on this lookup tool maintained by the Secretary of the State’s website. If the voters get in touch with her after noticing that the portal hasn’t registered any updates, they could request a duplicate ballot, which would carry a different serial number from the first. In that case, the first ballot would be voided, Labrot emphasized.

Labrot has been telling her residents to send in a second application if they haven’t received a ballot within five business days of requesting one. There’s no real danger of receiving two ballots, she said. “What you worry about is people waiting until a few days before the election and then saying that they never got a ballot.”