Washington – With polls showing strong support for the Affordable Care Act, Democrats on the Senate Judiciary Committee, including Sen. Richard Blumenthal, used the first day of Judge Amy Coney Barrett’s confirmation hearing to characterize the nominee as an imminent and dangerous threat to the health care law.

Quick confirmation of Barrett to the Supreme Court is virtually assured in the GOP-controlled Senate. But Democratic senators believe their most potent weapon is a sustained attack on how Barrett might rule on a case that will decide the future of the ACA. It is scheduled to be heard by the Supreme Court on Nov. 10 — one week after election day.

During opening statements on Monday, Democrats painted Republicans as recklessly rushing to confirm Barrett as the pandemic continues to consume the nation. Many Democrats, including Blumenthal, recounted how the ACA has been a lifeline to constituents.

With a large poster of the young boy behind him, Blumenthal spoke of 10-year-old Conner Curran, who lives in Ridgefield and suffers from Duchenne muscular dystrophy – a fatal illness that requires tens of thousands of dollars in medical treatment every year.

“Conner is a superhero, but he has always had a sidekick,” Blumenthal said. “He’s had the protection of the Affordable Care Act.  It has shielded him and his family from arbitrary caps on coverage that would have cut off his care when it became too expensive.  It has protected Conner from losing insurance because of this insidious disease that he never caused and chose.”

Blumenthal told Barrett that Conner, and “millions others like him, are why I will oppose your nomination.”

Sitting silently and masked while Democrats lambasted her nomination and Republicans argued for her confirmation, Barrett would shift an already conservative Supreme Court further to the right.

A judge on the Chicago-based 7th U.S. Circuit Court of Appeals, Barrett has never ruled on the ACA. But in a 2017 law review article as a University of Notre Dame law professor, Barrett criticized Justice John Roberts for voting with the majority to uphold the ACA. Those challenging the health care law argued its penalties for those who lacked health insurance – which have since been repealed – were unconstitutional. Joining the liberals on the court, Roberts ruled the penalties valid under Congress’ taxing power.

Blumenthal accused Barrett of “auditioning” for a seat on the Supreme Court through her criticisms of Roberts in the law review article.

Blumenthal said Republicans have again challenged the ACA in the courts because they have not been able to win enough votes to repeal the health care law in Congress. He also said the GOP’s attempts to rush Barrett’s confirmation is a “sham process” and called the nominee “an extremely ideological judge.”

On Twitter, President Donald Trump singled out Blumenthal for an attack.

“So Crazy to watch Senator Blumenthal of Connecticut lecture all on morals & ethics when for 25 years he said he was a Great War Hero in Vietnam, and he was never even there,” Trump tweeted. “He lied & cheated right up until the day he got caught. Thank you to those in military who turned him in!”

Trump has attacked Blumenthal several times because more than a decade ago the senator falsely said that he served in Vietnam. He served in the U.S. Marine Corps Reserves during the Vietnam era,  but did not deploy to Vietnam and has apologized for the misconception his comments engendered. 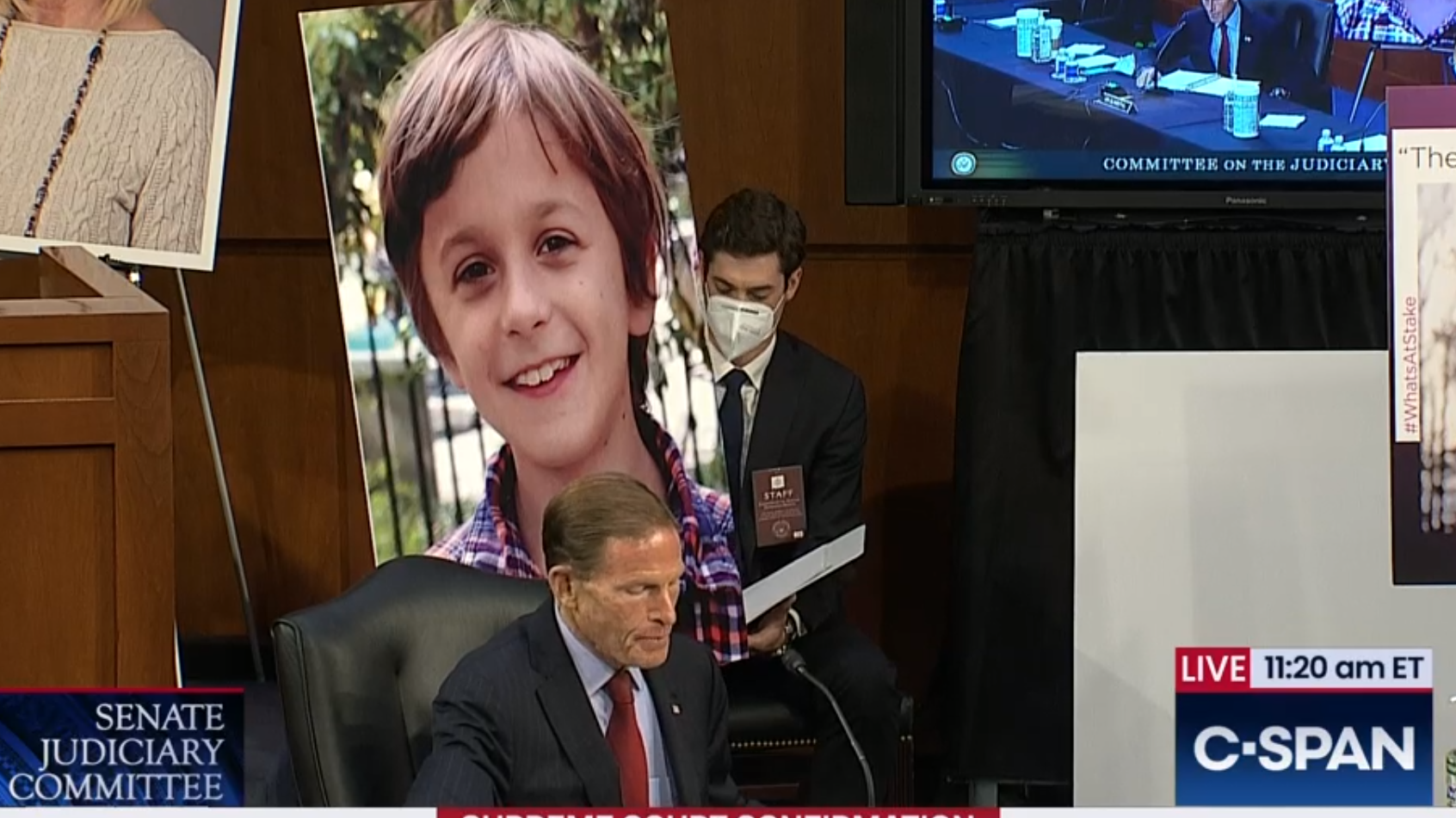 Democratic senators, including Richard Blumenthal, told tales of constituents who would be hurt if Barrett voted to repeal the Affordable Care Act as a justice on the Supreme Court.

Nearly every other Democrat on the Senate Judiciary Committee focused on the ACA, too.

“We are all agreed on two starting points: One is the importance of the Affordable Care Act,” said Sen. Richard J. Durbin, D-Ill., “And secondly, the extraordinary effort to drop everything — COVID-19 relief and any other consideration by Congress — to focus exclusively on filling this Supreme Court vacancy.”

Trump pressed Republicans on the Senate Judiciary Committee to push back against the Democrat’s ACA-based strategy.

“Republicans must state loudly and clearly that WE are going to provide much better Healthcare at a much lower cost. Get the word out! Will always protect pre-existing conditions!!!,” he tweeted.

But neither the president or congressional Republicans have articulated a plan that would replace the ACA or protect those with pre-existing health conditions.

Republicans on the Senate Judiciary Committee panel focused on Barrett’s accomplishments.  Sen. Ted Cruz, R-Texas,  noted that Democrats have said little about their nominee’s credentials, including a stellar rating from the American Bar Association.

“As Sherlock Holmes famously observed, ‘What speaks the loudest is the dog that didn’t bark,’ ” he said.

In her opening statement, Barrett said she believes Americans of “all backgrounds deserve an independent Supreme Court that interprets our Constitution and laws as they are written.”

“And I believe I can serve my country by playing that role,” Barrett said.

The latest legal challenge to the ACA focuses on its penalties again. Since the GOP eliminated them in a massive tax overhaul, Republican state attorneys general argued that the ACA is no longer valid because the law’s “individual mandate,” or the requirement to have health insurance, can no longer be enforced and is therefore no longer constitutional.

In December 2018, a Texas district court agreed with this argument and struck down the ACA. But the court stayed its ruling pending appeal. In the appeal,  a split panel of the 5th U.S. Circuit Court of Appeals deemed that the individual mandate was unconstitutional, but it instructed the district court to rehear the matter and “to employ a finer-toothed comb on remand and conduct a more searching inquiry” into whether the whole health care law should be tossed.

However, on March 2, before the district court could carry out the appellate court’s directive, the Supreme Court announced it would hear the case, blocking the lower courts from taking further action.

Meanwhile, several polls indicate the ACA is more popular than ever. A recent Morning Consult poll, for instance, said 62% of voters said they strongly or somewhat support the ACA, and 90% said protecting and strengthening the law was an important factor in casting their vote in the 2020 elections.