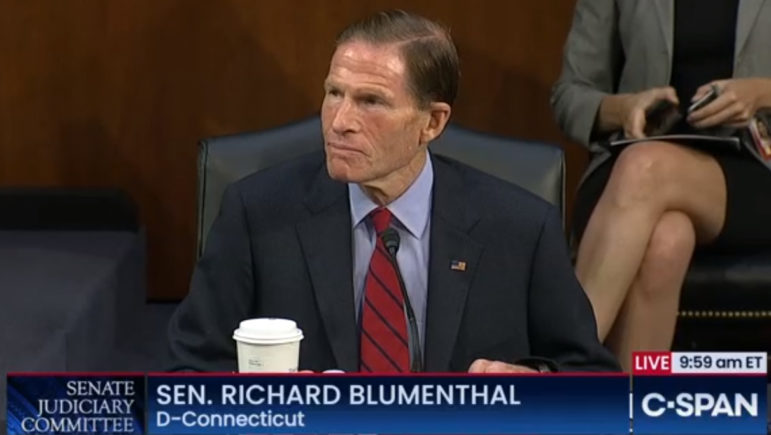 Washington  — Sen. Richard Blumenthal on Thursday tried to indefinitely delay Judge Amy Coney Barrett’s confirmation vote, but was thwarted because Republicans have a majority in the Senate and a lock on the process.

Barrett, President Donald Trump’s choice to fill the seat of the late Justice Ruth Bader Ginsburg, underwent rigorous questioning during two days of hearings this week without revealing much on how she would vote on key issues before the court, including the constitutionality of the Affordable Care Act.

But on Thursday, the nominee was no longer a witness. Although some outside witnesses invited by Democrats and Republicans on the judiciary panel hadn’t yet testified, committee chairman Sen. Lindsey Graham, R-S.C., called for a vote among panel members on Barrett’s nomination.

That provoked an outcry from Democrats and Blumenthal’s bid to delay the vote indefinitely.

“What we are seeing here is an exercise in raw political power,” Blumenthal said. “You are doing this because you can.”

Blumenthal argued that more time was needed to review Barrett’s record, especially since CNN on Wednesday evening reported that Barrett had made seven speeches and talks she had failed to disclose to the Judiciary Committee.

Graham called for a vote on Blumenthal’s motion and it was defeated on an 10-8 party line vote.

The discord in the committee continued.

As they have many times before, Democrats, including Blumenthal, accused Republican colleagues of hypocrisy for rushing Barrett’s confirmation,  when four years ago they refused to act on former President Barack Obama’s Supreme Court pick, Merrick Garland, saying his confirmation would occur too close to a general election.

“You are breaking your word,” Blumenthal told Republicans on the panel.

“I believe that this rush, sham process is a disservice to our committee,” Blumenthal said, noting there has never been a nomination in an election year after the month of July.

“You know I respect you,” Kennedy said. “But you just accused me to breaking my word … I think the record will confirm that I never made that commitment.”

Blumenthal said he did not accuse Kennedy of breaking his word, but other Republicans had, including Graham.

Graham admitted that he had said he wouldn’t move to confirm a final-year Trump nominee. But he said he had changed his position well ahead of the death of late Justice Ruth Bader Ginsburg in reaction to the contentious confirmation of Justice Brett Kavanaugh.

Despite their inability to block Barrett’s confirmation, Democrats were, however, able to use a Senate procedure to stall a committee vote on the nomination a week, until Oct. 22.

“We have the votes,” McConnell said. Republicans hold a 53-to-47 majority in the Senate.

But there’s one last thing Democrats can do to stall that floor vote. That’s for Senate Judiciary Committee Democrats, like Blumenthal, to boycott next week’s committee vote on Barrett.

At a Thursday morning press conference with fellow Judiciary Committee member Sen. Mazie Hirono, D-Hawaii, Blumenthal said  “boycotting a meeting is a tactic that could be used at some point.”

“I’m not going to comment on what we may be doing in the future,” he said.

Holding the majority, however, Senate Republicans can change the quorum rules to eliminate the requirement two Democrats be present at next week’s Judiciary Committee vote.

The Senate could also vote on a discharge resolution that would remove the responsibility of considering the Barrett nomination from the committee, allowing McConnell to move the nomination directly to a floor vote.