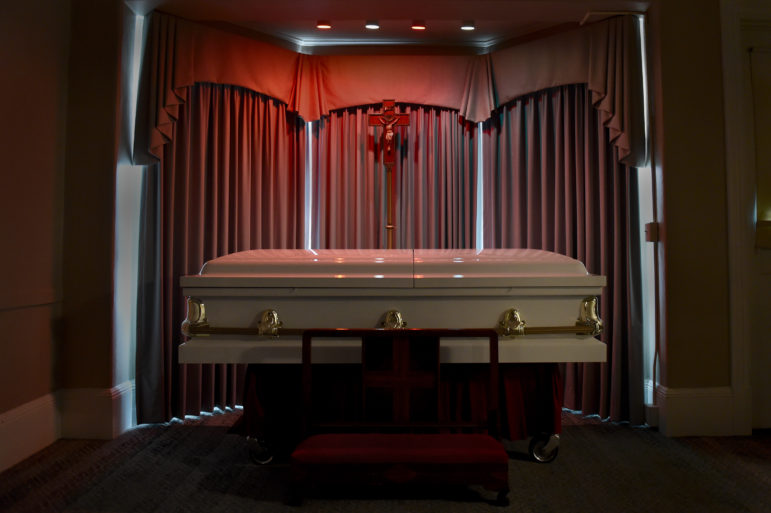 A casket sits in a parlor at the DeLeon Funeral Home in Hartford. DeLeon’s clientele is largely from the Hispanic community and they have seen a spike in funerals in April and early May due to the COVID19 pandemic, according to owner Kevin Davidson.

When the stack of death certificates began piling up in Patty Ulatowski’s office in Bridgeport in April, the extent of the wrath of COVID-19 started to become clear.

“It is shocking when you see it laid out,” Bridgeport’s records manager said.

Single-page death certificates were stacked in monthly piles on a table in her office. The stack from April dwarfed the pile from March, when the virus touched down mid-month.

Almost all of the increase in deaths in Bridgeport, and state-wide, this year is attributed to COVID-19.

It would take four months for these certificates – and those in every other municipality in Connecticut – to be digitized so the public and health experts could determine just how many more people were dying during the pandemic than usual, and from what causes. As residents bunkered in for months during the outbreak, concern grew that more people would die after putting off necessary doctor’s appointments or non-essential surgeries – or that the isolation would lead to an uptick in suicides or drug overdoses.

An analysis by the CT Mirror of data recently released by the Connecticut Department of Public Health shows that, during the height of the pandemic, the number of people who died in the state jumped 55% between March and May – 4,326 more deaths than normal. The coronavirus was the culprit of 88% of those additional deaths.

Source: CT Department of Public Health. Toggle between “All Deaths” and “Non-COVID deaths.” The number of deaths in 2020 is represented in blue. The orange box and whisker plot shows the distribution of the number of deaths that occurred in those months between 2012-2019; the black line through the box shows the median value. The box itself shows where the middle 50% of values in dataset fall while the tips of the plot show the outliers. Credit: Kasturi Pananjady

While health experts have underscored that Black and Hispanic residents have been disproportionately impacted by the virus, an analysis released by the Connecticut Data Collaborative today shows how vast that disparity is. The number of Black residents who died in April more than tripled, and Hispanic deaths almost tripled. Meanwhile, white deaths nearly doubled.

“These differences are the result of centuries of structural racism, which has manifested in inadequate and unequal treatment of people of color, ultimately causing health disparities in our communities,” reads the 4-page analysis.

There has been a void of research so far on how Connecticut compares to other states.

Only Connecticut and North Carolina have not digitized death records. Research on excess deaths in the 48 other states through the five-month span of March through July shows the death counts jumping by 20% above what would be expected. While Connecticut is not included in this rundown, the Mirror analysis shows that deaths during those same months were 18% above what would be expected. While the coronavirus accounted for about 98 percent of the excess deaths experienced in Connecticut since the pandemic began through July, it accounted for only two-thirds of the excess deaths nationwide.

Source: CT Department of Public Health. Toggle between “All Deaths” and “Non-COVID deaths.” The number of deaths in 2020 is represented in blue. The orange box and whisker plot shows the distribution of the number of deaths that occurred in those months between 2012-2019; the black line through the box shows the median value. The box itself shows where the middle 50% of values in dataset fall while the tips of the plot show the outliers. Credit: Kasturi Pananjady

Daniel Weinberger, one of the authors of the research published last week in the Journal of American Medical Association and professor of epidemiology at Yale School of Public Health, points to several reasons for such differences.

“There is a tremendous amount of variability between states,” he said. “The size of this gap can be influenced by the intensity of testing relative to the size of the epidemic, as well as state-level reporting guidelines. For instance, some states require a positive SARS-COV-2 test for a death to be recorded as caused by COVID-19; others only require a suspicion that the death was caused by the virus.”

In Connecticut, the state’s Office of the Chief Medical Examiner reviews all deaths in which a body will be cremated. That office has reclassified 110 deaths as COVID-19 deaths after questions were raised about 175 deaths since the pandemic.

Chief Medical Examiner James R. Gill said he suspects Connecticut’s increased death counts during those first months of the pandemic will be among the highest, but said there is no way to know yet because the state is so far behind in reporting deaths. Not having the data in real time is a problem, he said, because it hinders public health officials’ ability to track upticks in deaths that might not be properly tested and classified.

The Department of Public Health was unable to say when they plan to digitize their death records.