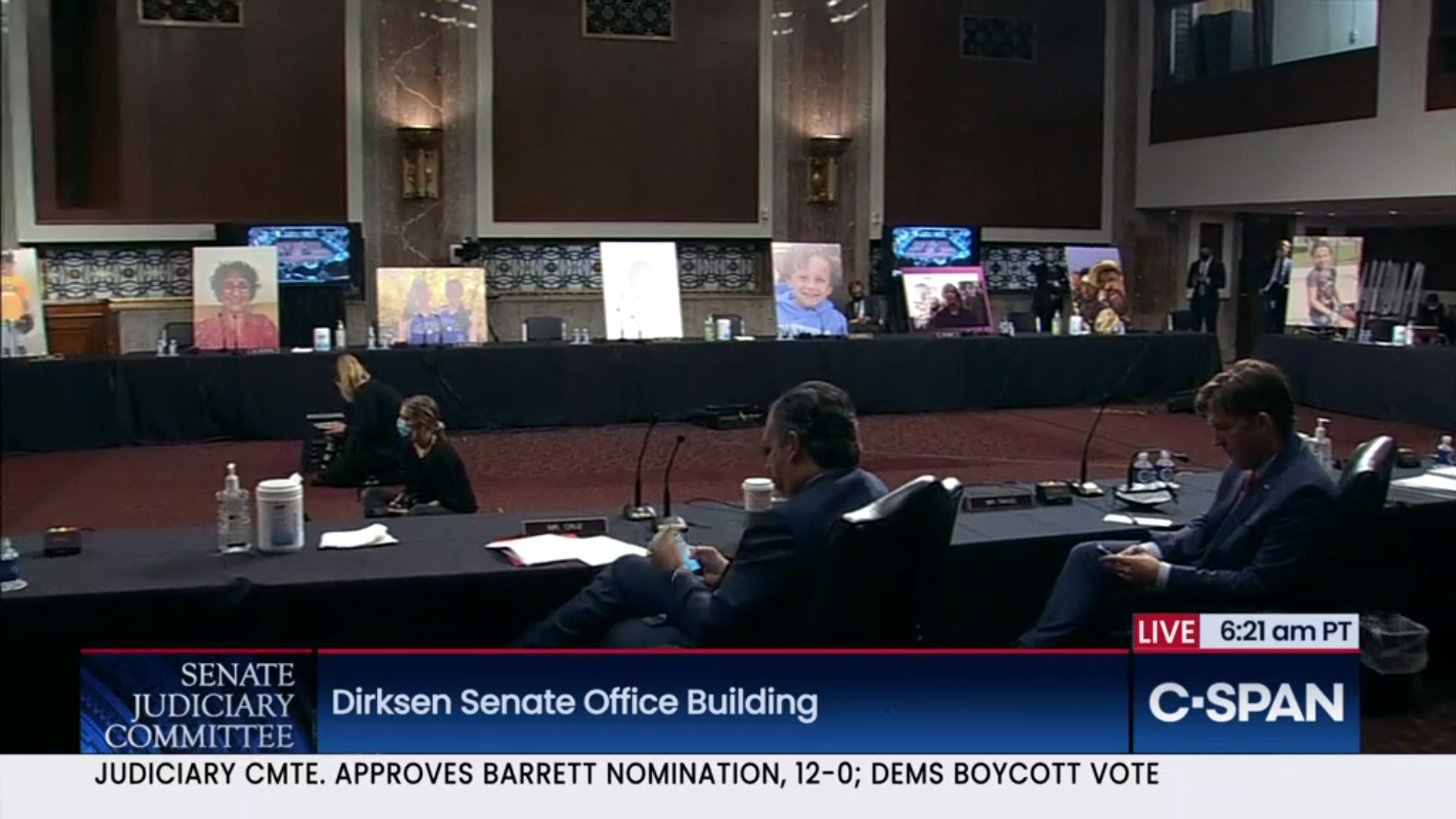 Democrats boycotted the Judiciary Committee vote on Judge Amy Coney Barrett’s nomination as an act of protest over a rapid confirmation process within days of the upcoming Nov.3 election.

Washington – Sen. Richard Blumenthal is not typically a no-show at high-profile official functions. But on Thursday, he and every other Democrat on the Senate Judiciary Committee boycotted a meeting to vote on the nomination of Judge Amy Coney Barrett to the U.S. Supreme Court.

Barrett’s nomination was approved on a 12-0 vote anyway after committee Chairman Lindsey Graham, R-S.C., brushed aside a committee rule that generally requires two members of the minority party to be present to conduct committee business.

“That was their choice,” Graham said of the Democratic boycott. “It will be my choice to vote the nominee out of committee. We’re not going to allow them to take over the committee.”

Republicans argued that there has been precedent in which committee business moved forward if a simple  majority of the entire committee was present.

Although not present in the committee room, Blumenthal said he watched the Republican-only proceedings remotely.

“Their case for moving Judge Barrett forward was to attack Democrats. It was full of bile and anger and grievance. They are running away from the issues,” Blumenthal said at a press conference on the steps of the U.S. Capitol.

The Democratic boycott was an act of protest over the Senate’s decision to confirm Barrett within weeks of the Nov. 3 election.

“The nomination of Amy Coney Barrett is the most illegitimate process I have ever witnessed in the Senate. And her potential confirmation will have dire, dire consequences for the Senate, for the Supreme Court and our entire country for generations to come,” said Senate Minority Leader Charles Schumer, D-N.Y.

Instead of appearing at the meeting, Democrats placed large placards with photos of constituents who had benefitted from the Affordable Care Act in their seats.

Blumenthal’s seat held a  photo of Conner Curran a 10-year-old who lives in Ridgefield and suffers from Duchenne muscular dystrophy – a genetic illness that requires tens of thousands of dollars in medical treatment every year.

Blumenthal said he wanted committee Republicans to be watched by the “real people” on the posters when they voted for Barrett, whose confirmation vote in the full Senate is scheduled for Monday.

Democrats have been tightly focused on the future of the Affordable Care Act. The Supreme Court is set to hear oral arguments Nov. 10 on a case challenges the law that was brought by a group of Republican attorneys general and supported by the Trump administration. 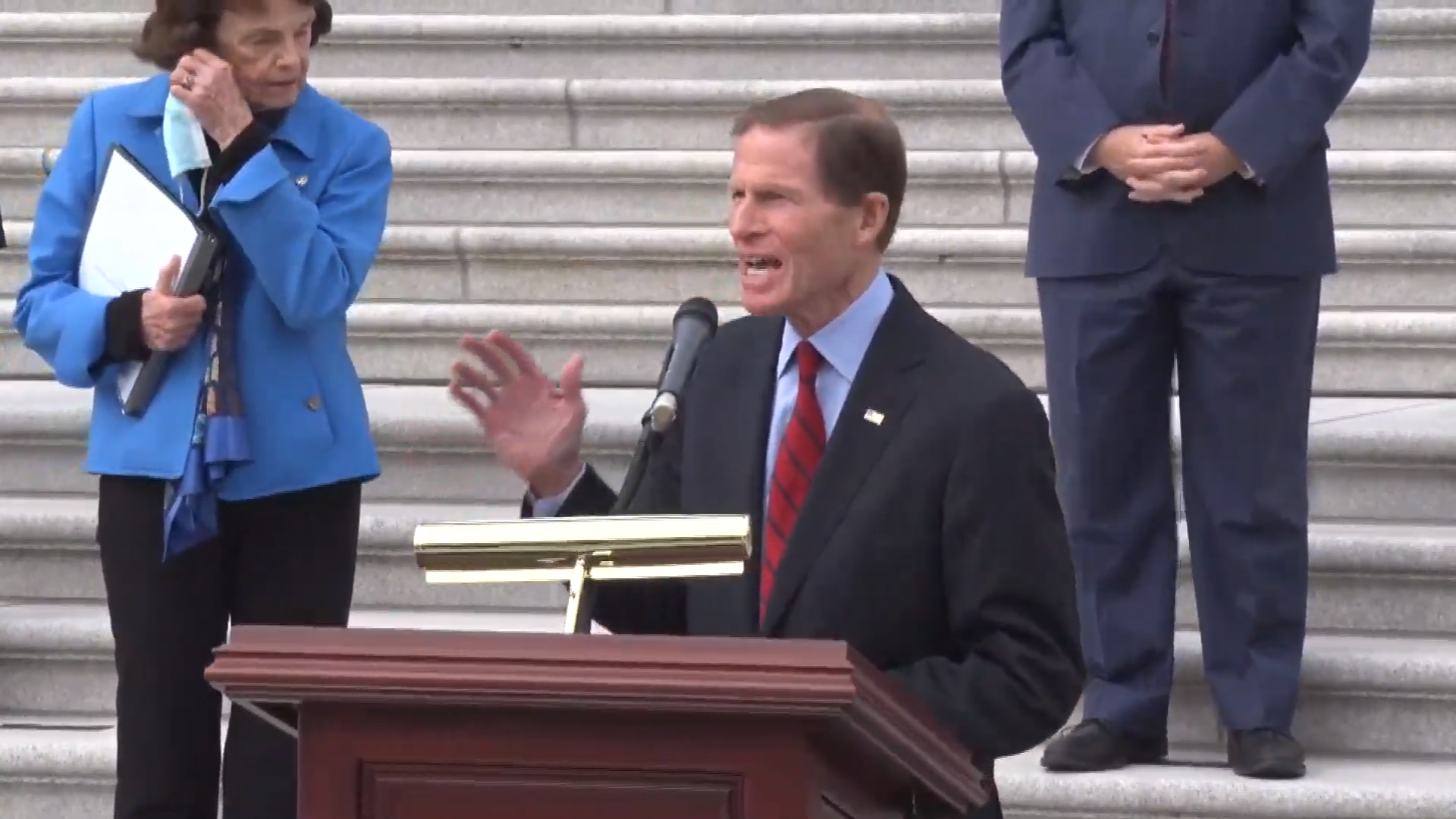 Connecticut Sen. Richard Blumenthal, with California Sen. Dianne Feinstein behind him, at a press conference of Senate Judiciary Committee Democrats.

Before she became a judge on the U.S. Court of Appeals for the 7th Circuit, Barrett criticized Supreme Court Chief Justice John Roberts’ decision to uphold the Affordable Care Act.

But during her confirmation hearing, Barrett insisted she was not “on a mission to destroy the Affordable Care Act.”

Later in the day,  President Donald Trump released part of a taped interview he had with Leslie Stahl that made his position clear on the ACA, saying he wants the Supreme Court to abolish it.

“I hope that they end it; it’ll be so good if they end it,” Trump said.

With polls showing the Affordable Care Act has increased in popularity, Democrats are expected to continue to make the health care law a major issue as they campaign.

“Republicans’ decision to bend the Senate’s rules to advance Judge Barrett’s nomination to the U.S. Supreme Court less than two weeks before the election shows just how far they’re willing to go to take health care away from millions of Americans in the midst of a global pandemic,” said Sen. Chris Murphy, D-Conn., one of the senate’s biggest champions of the ACA.