The melting of the Antarctic Ice Sheet is well underway and will be almost impossible to reverse, even if global emissions reduction targets are met, according to new research published in Nature.

The study, which seeks to uncover the complexities of the Antarctic ice system, finds that partial, but major, melting of the south polar region’s ice sheet will raise global sea levels roughly 2.5 meters (8.2 feet) over a period of time extending beyond 2100. Importantly, it will be difficult to counteract these changes, even if temperatures were to fall after reaching 2 degrees Celsius (3.6 degrees Fahrenheit) of warming above pre-industrial levels.

In particular, “the West Antarctic Ice Sheet will not regrow to its modern extent until temperatures are at least one degree Celsius [1.8 degrees Fahrenheit] lower than pre-Industrial levels,” according to the study. With carbon emissions soaring annually, such a turnaround isn’t expected any time soon.

In the discourse around climate change, Antarctica has long been the elephant in the room. Much of the world’s attention has been focused on the Arctic, and its Greenland Ice Sheet, because the northern region is warming at twice the rate of the rest of the world. Unlike Arctic sea ice which responds rapidly to changes in the planetary energy balance and to inputs of greenhouse gas emissions, Antarctica’s response is far slower, and being so far away, is less in the public mind. For many decades, scientists didn’t believe it was even possible for humans to drastically affect the Antarctic ice cap. But more recent research shows that not only is it possible, it’s already happening. In fact, the ice sheet is losing mass at an accelerating rate.

“A lot of the models of Antarctic ice loss are fitting to shorter time scales — projections of 100 or 200 years out,” says Torsten Albrecht, study co-author and a postdoctoral researcher at the Potsdam Institute for Climate Impact Research. “We trained our model over paleo time scales… to understand certain events in the past which tell us a lot about the future.” 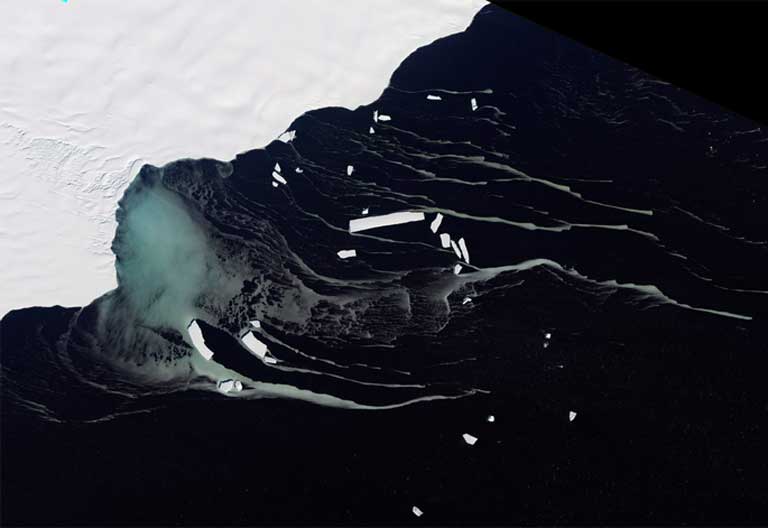 Ice drifts out to sea at Mackenzie Bay, Antarctica. Image by NASA Goddard Photo and Video licensed under CC BY 2.0.

Though such changes at the extreme end of the spectrum would unfold over several centuries, action to combat catastrophic ice loss, and subsequent sea level rise, is needed now, say the scientists. “This is a huge ice mass almost five kilometers (3 miles) thick,” notes Albrecht. “We are about to move this, just by our emissions. And once you start moving it, it will keep moving for centuries.”

That’s because ice loss in Antarctica is driven by several self-amplifying feedback mechanisms. For example, as the ice sheet melts, the elevation above sea level of its ice mountains decreases, with the remaining ice exposed to the warmer atmospheric temperatures found at lower elevations, triggering more melting and accelerating loss.

Further, the parts of the ice sheet that rest on bedrock below sea level — many of which are in West Antarctica and substantial areas of East Antarctica — are especially susceptible to significant melt from underneath due to moderate oceanic temperature increases. Melting in these regions could affect the overall stability of the ice sheet, potentially resulting in more rapid collapse.

On November 4, the United States, one of the world’s leading greenhouse gas emitters, will formally exit the Paris Climate Agreement. But even if all the world’s remaining nations met their Paris targets (which currently seems very unlikely), sea level would still rise several meters in the coming centuries. “Even if future generations find technologies to extract greenhouse gases from the atmosphere, they would still need to get even more CO2 and methane out of the atmosphere than we had before pre-industrial times to grow the Antarctic ice sheet back to the state we have today,” says Albrecht.

The evaluation of what it would take to recover the Antarctic Ice Sheet is what’s novel about this study, says Ted Scambos, a senior research scientist at the National Snow and Ice Data Center unaffiliated with the study. But, he suggests, returning to a cooler, ‘normal’ climate state in the future seems unlikely. “It will be too expensive to go back all the way,” says Scambos. “But we’ll be adapted to the new normal by the end of this century and we’ll simply try to keep it there, or slow down the pace of change.”

Currently, Antarctica’s contribution to sea level rise is small when compared to other sources. For example, 30% of sea level rise came from Alaska’s melting glaciers in the 20th Century. But the Antarctic Ice Sheet comprises enough mass to contribute 58 meters (190 feet) of sea level rise if it were to melt out completely — enough to submerge thousands of cities around the world in the distant future.

Predicting precisely when and how the Ice Sheet will respond to temperature changes this century has proven difficult. A recent study published in Climate Dynamics found that past models haven’t included the potential impacts of internal climate variability — such as annual fluctuations in the climate. If accounting for such variability, an additional 7 to 11 centimeters (2.7 to 4.3 inches) of sea level rise are possible by 2100.

“That increase alone is comparable to the amount of sea level rise we have seen over the last few decades,” co-author Chris Forest, a professor of climate dynamics at Penn State University, said in a press release. “Every last bit adds on to the storm surge, which we expect to see during hurricanes and other severe weather events, and the results can be devastating.”

This story originally appeared Oct. 28, 2020, in Mongabay through the Institute for Nonprofit News network.