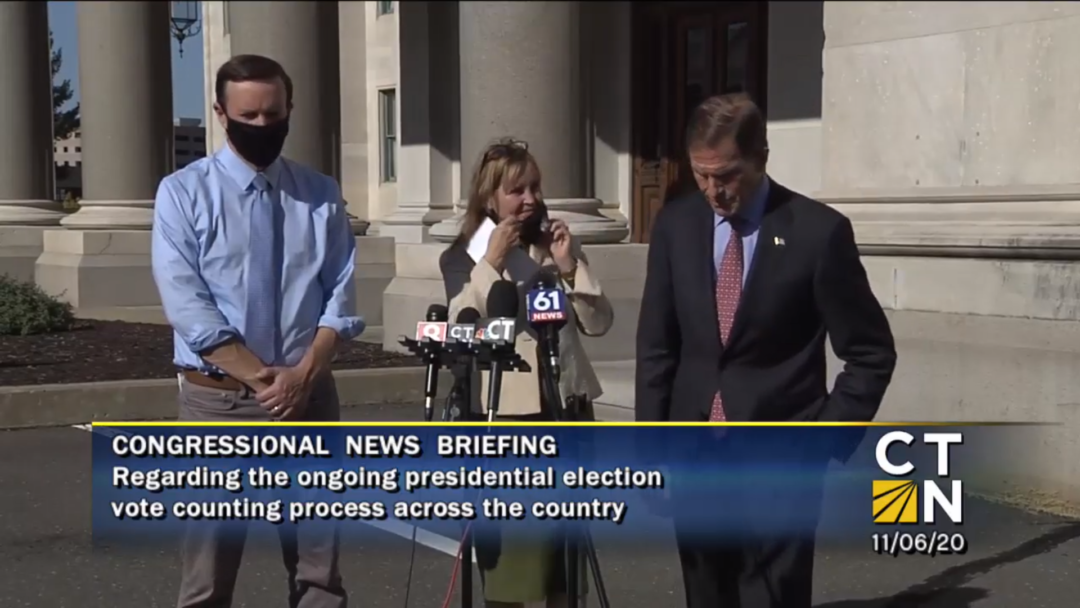 Murphy and Blumenthal are backing a push to overhaul Connecticut’s election laws.

While the nation was riveted on the evolving vote counts in the presidential election, U.S. Sens. Richard Blumenthal and Chris Murphy  joined Connecticut Secretary or State Denise Merrill in pressing for changes to the way Connecticut voters cast their ballots in the future.

As far as conducting elections, “Connecticut is in the Neanderthal era,” Blumenthal said.

The pandemic and the increased interest in the presidential race this year has highlighted how other states run elections.

Most states allowed early voting. Connecticut is only one of six states that still do not.

Five states conduct elections entirely by mail — Colorado, Hawaii, Oregon, Utah and Washington — where voters do not need to request a ballot and instead automatically receive one. Another 29 states and Washington D.C. offer “no-excuse” absentee voting, which means any voter can request a mail ballot without providing an excuse.

Although an exception was made for the 2020 election in response to the pandemic, Connecticut voters are normally only allowed to vote by mail under certain conditions.

At a press conference on Friday in Harford with Blumenthal and Murphy, Merrill predicted there would be a “some kind of reckoning” in the wake of the election that would prompt changes in Connecticut’s  laws.

Connecticut’s Democratic senators agreed and have promised to lobby state legislators on the need for early voting and greater access to mail-in ballots.

This week’s election resulted in unprecedented turnout in the nation, and in Connecticut, the boost was attributed to much greater use of mail-in ballots.

Merrill said “now that voters have been able to vote by absentee ballot if they choose, it is manifestly unfair to tell them they cannot vote the way they wish in the future.”

Merrill also said she was thankful the federal government gave her additional funding to conduct this year’s general election, but that more was needed.

“Our tabulators are 20 years old,” she said.

She said Connecticut’s election went off without a hitch and predicted that final tallies would be available Friday afternoon.

To allow early voting or “no-excuse” mail-in voting, a constitutional amendment must be approved by Connecticut’s state House and Senate in a two-thirds vote and win the support as a ballot initiative by a majority of state voters.

In 2014, an early voting initiative was approved by the general assembly and was placed on the ballot.  Connecticut voters rejected it by about 44,000 votes.

Merrill said there should be another try. And it could succeed, if the election has boosted both the appetite for early and mail-in voting and the number of Democrats in the general assembly who are more likely to support electoral changes.

Meanwhile, Connecticut’s U.S. Senators joined most of their Democratic colleagues — and a few Republicans — in strongly denouncing President Donald Trump’s baseless claims of widespread fraud in battleground states of the election.

Blumenthal said the president’s remarks were “beyond dangerous and damaging.”

“They were pathetic and sad,” he said.