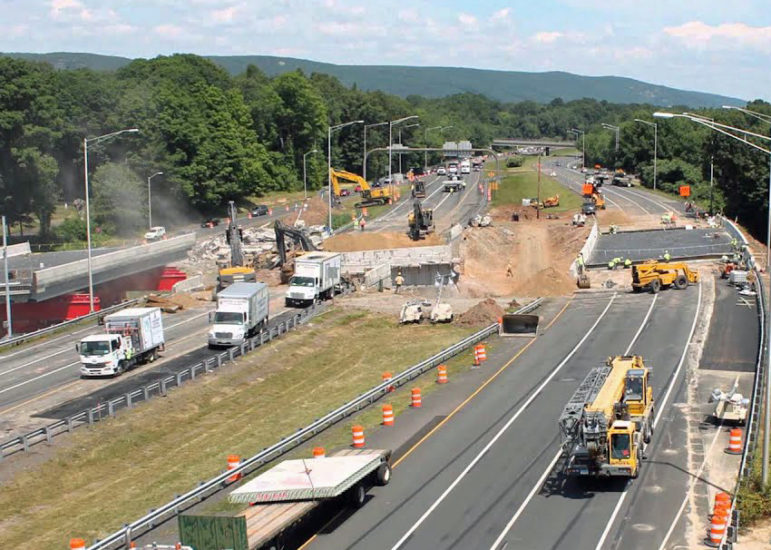 With big deficits looming over the next two fiscal years, Lamont already is expected to propose some ugly spending cuts in February as he tries to avoid tax hikes while potentially gearing up to seek re-election in 2022.

Or, to mitigate those unpleasant options, he could try to steer money away from transportation — which could lead some to question his commitment to the program.

“I have no intent to change the law” and shift funding away from transportation, the governor said Monday. “But my life would be a heck of a lot easier if they [legislators] could vote on a plan.”

Lamont asked lawmakers in 2019 to approve tolls on all vehicles and, in 2020, to impose fees just on large trucks. Lawmakers acted on neither but also approved no substitute plan to fund transportation over the long haul.

Meanwhile, the state budget’s General Fund will run $2.1 billion in deficit next fiscal year unless adjustments are made, nonpartisan analysts warned Friday. That’s a 10% shortfall.

The governor and legislature are expected to use Connecticut’s record-setting, $3.1 billion rainy day fund to mitigate that problem.

But analysts also project potential deficits of $2.2 billion and $2.1 billion in the 2023 and 2024 fiscal years, respectively. That means the reserve might need to be spread over several years to cushion the blow as Connecticut recovers from the coronavirus-induced recession.

And a significant part of the immediate budget challenge involves a commitment to steer more resources — specifically, tax receipts from motor vehicle sales — away from the General Fund and into the Special Transportation Fund.

The governor is supposed to deliver an extra $180 million to the STF next fiscal year, and then boost the annual transfer by another $90 million in 2022-23.

Lamont could argue the General Fund simply can’t spare these resources right now as it tries to avoid tax hikes at the worst possible time.

According to the state Department of Labor, nearly 190,000 residents currently are collecting weekly unemployment benefits. By comparison, the state lost roughly 120,000 jobs in the last recession, which ran from December 2007 through mid-2009. Connecticut’s restaurants and the rest of its hospitality sector remain particularly fragile, with COVID-19 cases climbing upward since late August. And with the coronavirus slowing demand for transit programs, the governor could argue this program could tighten its belt for another year.

The governor also noted that the sales tax, the second-largest revenue engine after the income tax, really was designed to cover the General Fund.

“It doesn’t really impress me as a strategy, Let’s borrow from Peter to pay Paul,” Lamont said Monday.

The transportation fund has been primarily supported with a combination of levies on fuels and with motor vehicles fees. It covers the debt service on the hundreds of millions of dollars Connecticut borrows annually to fix roads, bridges and rail lines.

But if Lamont or the legislature were not to deliver the sales tax revenues to transportation, as planned, it would raise several problems.

A history of broken promises to invest in transportation

The first is rooted in recent history.

Connecticut governors and legislatures have been pledging — and for the most part reneging — on promises to dedicate more resources to transportation for the past 15 years.

Over the same period, Connecticut’s infrastructure has gotten older and more overcrowded. Transportation officials already have warned Connecticut’s annual spending on infrastructure falls several hundred million dollars short of the level needed to do anything more than basic maintenance.

And while most of those broken promises predated Lamont, he and his fellow Democrats in the legislature’s majority shaved $170 million off pledged sales tax revenue transfers to transportation over two years in 2019.

State analysts warned Friday that even given the current, modest pace of the transportation rebuilding program, the STF — absent more resources — is running in deficit this year and faces insolvency by 2024.

“That sales tax revenue, Republicans believed, needed to go into the transportation fund for long-term solvency,” he said, adding the GOP still holds to that. “Scaling back that schedule will only exacerbate the problems.”

Voters expect transportation funds won’t be spent on other programs

The second problem Lamont faces if he siphons revenues away from transportation involves the state Constitution.

By an eight-to-one margin, voters in 2018 overwhelmingly ratified the so-called “lockbox” amendment that prohibits state officials — once a new funding source for transportation has been established — from spending the funds on something else.

The administration argued its 2019 maneuver didn’t violate this amendment since the sales tax transfers — though already enacted in law — hadn’t actually occurred yet from an accounting standpoint.

But tolls opponents seized on that, and other broken promises, as evidence that state officials never would stop raiding transportation funding for non-transportation purposes.

Office of Policy and Management Secretary Melissa McCaw, Lamont’s budget director, said last December that the 2019 maneuver was fine legally, but “it clearly rang loud throughout the legislative session” that lawmakers were concerned about the lock box.

Lamont also must hope, if he should again block funds for transportation, that new problems don’t crop up with Connecticut’s aging network of overcrowded highways, bridges and rail lines.

And Don Shubert, president of the Connecticut Construction Industry Association, noted recently that the industry had regained only half the 20,000 jobs it lost in the last recession — until the pandemic struck and eliminated all of that recovery.

Rep. Roland Lemar, D-New Haven, co-chairman of the legislature’s Transportation Committee and a supporter of tolls, said he understands why Lamont doesn’t plan to push that option again in 2021: The political will simply isn’t there.

But Lemar said absent some other long-term plan to finance transportation, Connecticut cannot afford to strip those sales tax revenues away.

“We have to make those investments, across the board,” he added. “If our economy is going to continue to grow in the 21st century, transportation investment is going to be at the core.”