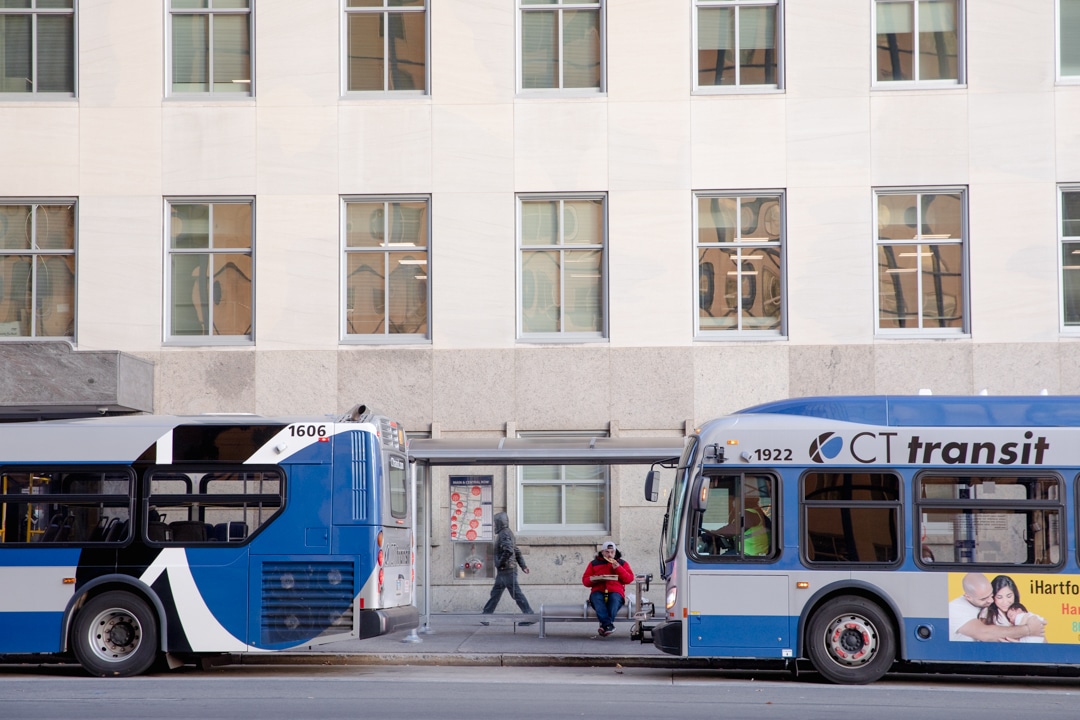 A bus arrives at a station on Main Street in Hartford.  |   photo by: Yehyun Kim :: ctmirror.org

Public transit services and Connecticut’s transportation building program have been forced to compete for limited resources for nearly a decade.

But if Connecticut is to revitalize its economy in an inclusive fashion, experts say, legislators and governors must embrace both priorities in equal measure.

Without a comprehensive, time-efficient system of buses and trains — and interconnecting bicycle and walking paths — too many workers can’t get to the jobs, classes and other training they need to make the economy grow.

And if a construction industry that has languished since the last recession isn’t allowed to rebuild Connecticut’s aging infrastructure, many low- and middle-income households will struggle — even as commerce remains trapped in gridlock.

“What’s the vision? What are we trying to achieve here?” said Lyle Wray, executive director of the Capitol Region Council of Governments since 2004.

A decade of meager transportation spending

“We don’t really rank our projects,” Wray said. “We don’t ask which ones are really going to mobilize our economy.”

The CRCOG leader noted that Connecticut ranks middle-of-the-pack in one key transportation metric. According to the Urban-Brookings Tax Policy Center, a Washington, D.C.-based fiscal think-tank, Connecticut ranked 22nd nationally in state and local spending per capita in 2017 on roads and highways.

The state’s Special Transportation Fund spent $1.61 billion in 2019 — the last fiscal year before the coronavirus pandemic struck. After adjusting for inflation, that’s just 21% growth since 2011.

More importantly, over that same period, the share of the STF dedicated to construction and transit has grown modestly.

The debt service on the hundreds of millions of dollars Connecticut borrows annually for highway, bridge and rail upgrades, and spending on transit programs, together consume about two-thirds of the STF. Eight years ago, they were slightly more than 62%.

And given that Connecticut’s transportation spending was recognized in 2011 as far too little to fund much more than basic maintenance and a fragmented, limited transit program, advocates say it was a wasted decade. 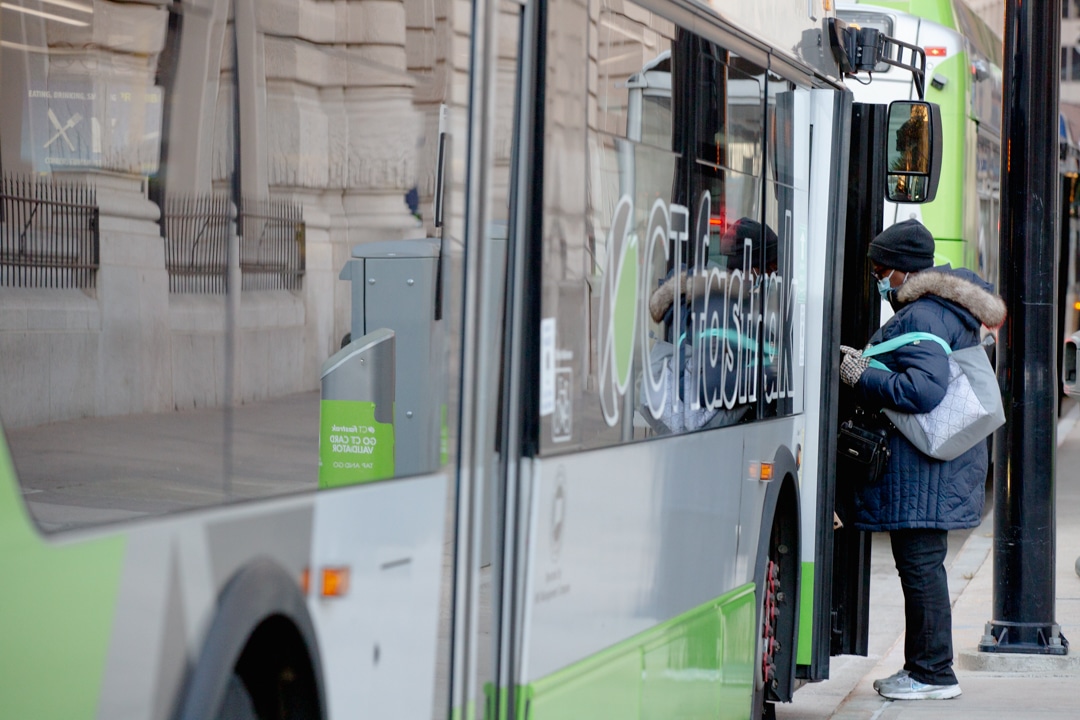 A passenger waits to get on the bus on Main Street in Hartford.

Connecticut’s construction industry came into the 2010s reeling, having shrunk from about 70,000 jobs down to 50,000 in the 2008-09 recession, according to state Department of Labor statistics.

But despite three successive annual increases in the state’s wholesale fuel tax — from July 2005 through 2007 — and a fourth one in 2013, the state’s investment in transportation construction largely remained flat.

That’s because governors and legislatures spent more than $1 billion in fuel tax receipts on non-transportation programs between 2006 and 2014.

Construction industry gets lots of work on transit-related projects

Don Shubert, president of the Connecticut Construction Industry Association, noted the industry had limped along, regaining only half the 20,000 construction jobs lost in the last recession — until the pandemic struck and eliminated all of that recovery.

But without additional dollars — whether from tolls, gasoline tax hikes, or other sources — it will be hard for policymakers to find funds for construction work.

Before a pandemic-induced plunge in March, transit ridership was strong. It had grown steadily between 2011 and 2016 before leveling off, according to Department of Transportation stats.

But according to Richard W. Andreski, the DOT’s bureau chief for public transportation, costs continued to rise as officials tried to expand service and add routes.

“A lot of my members, a big part of their business plan is transit,” he said, adding that development of the New Britain-to-Hartford busway, train stations on the Springfield to New Haven line, and upgrades to the New Haven rail yard upgrades have kept the transportation construction industry afloat in recent years.

“Public transportation is as crucial as the water supply and as electricity,” said Jim Cameron, a founder of the Commuter Action Group and former chair of the Connecticut Rail Commuter Council. “We take it for granted, but it’s got to be there.”

Connecticut has a “functional transit system” that provides close-to-adequate service during peak hours in urban centers, but lacks important connections — especially to the suburbs — and evening service vital for second-shift workers and community college students, said Tony Cherolis, coordinator of the Transport Hartford program at the Center for Latin Progress in the capital city. “It’s definitely not world-class.”

Yale Law School Professor Anika Singh Lemar, who teaches the school’s community and economic development clinic, said the lack of new jobs created in Connecticut’s cities can’t be underestimated. Coupling that with a lack of transit linking workers to suburban jobs is a formula for economic stagnation.

“The bus schedules are not great. The amount of time it takes to get to work is not great,” Lemar said.

Many low-income workers who need the bus because they can’t afford a car spend so much time commuting they can’t get involved in their children’s school events, let alone take a class at a community college.

“It makes it impossible for you to do anything else if you’ve got a 90-minute bus ride on top of your work schedule,” Lemar said.

Connecticut’s dearth of affordable housing outside of its urban centers exacerbates this problem, she added.

Nefari Hassan of West Hartford has used the transit buses regularly to advance his career goals.

A 19-year-old sophomore studying sociology and planning at Bridgewater State University in Boston, Hassan has taken classes remotely from home since the pandemic began.

But to get to his job, tracking passenger data for CTtransit in Hartford, Hassan walks about 30 minutes on weekdays from the base of Avon Mountain to Bishops Corner, where he catches a bus into the capital city.

The routine requires planning and perseverance, not to mention lots of face masks, gloves and hand sanitizer.

“It allows me to get familiar with my surroundings,” he said, explaining that a car is too expensive right now. “At nighttime, it gets very quiet. It’s nice to take in the ambience.”

Many of Connecticut’s bus commuters are career-driven but need more transportation options to achieve their goals, said Cherolis, who added that the state’s “windshield bias” is crippling economic growth.

“If it [public transit] is inconvenient, it only will be used by those who don’t have a choice,” he said. “That’s where the misconception about transit only appealing to the poor comes from. … A lot of folks in positions of power, who make land use decisions, have never ridden a bus since grade school.”

When Foley attacked the Malloy administration’s investment in the New Britain-t0-Hartford busway — more than $450 million in federal funds and $110 million from the state had been spent on its development by that point — the GOP candidate added, “There are many (transportation) alternatives for people between New Britain and Hartford.”

Malloy countered that his opponent, a wealthy Connecticut businessman who pumped millions of his own dollars into his campaign, simply couldn’t relate.

“Has he (Foley) ever seen a bus?” Malloy asked. “He does not understand people who take buses.”

According to Cherolis, about 30% of Hartford’s residents lack a car, and advocates said many other urban centers have similar ratios.

But Gannon Long, 38, policy and public affairs director for Operation Fuel in Hartford, said some professionals simply want options other than car ownership.

Long, who grew up in Hartford but spent eight years in Washington, D.C. and Boston, found a routine that worked well for her when she returned to Connecticut’s capital two years ago.

She walks 15 minutes to work each day from her home on Hungerford Street and uses bus service for business meetings, grocery shopping and other errands.

Public transit and the occasional Uber ride are cheaper than car payments, insurance, maintenance and gasoline, she said. 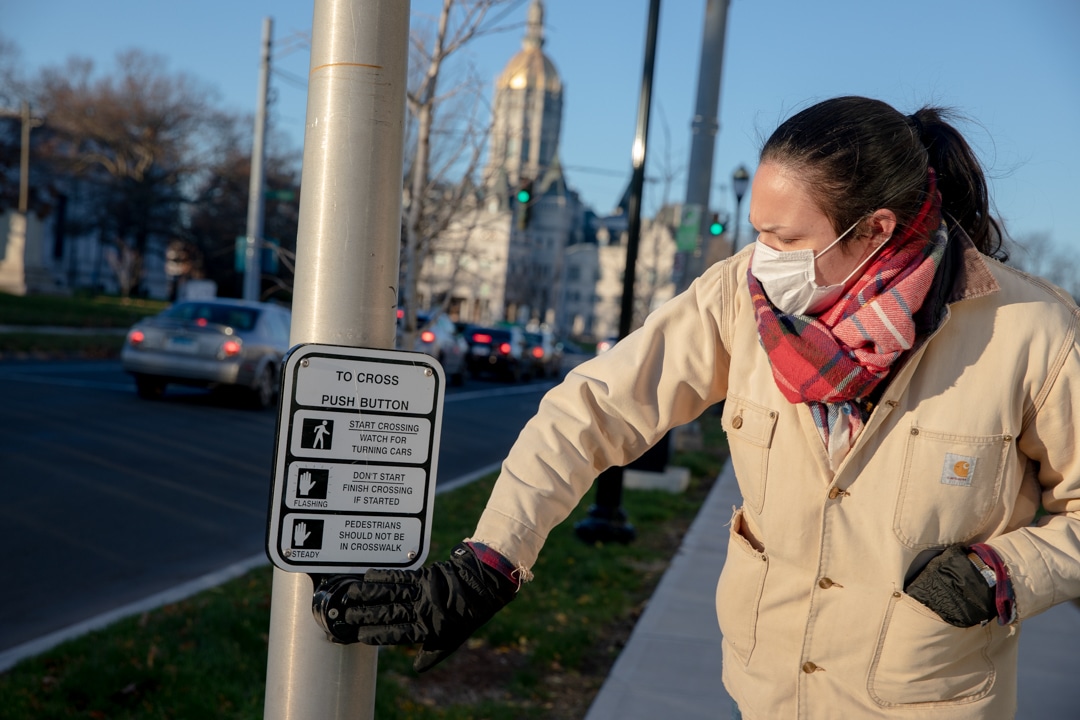 “What we need to keep in mind, first and foremost, is the most vulnerable users of our transportation systems,” Gannon Long said. “Building laws, redesigning streets and coming up with systems that only serve people with cars by default leaves out a lot of people in this neighborhood and many others.” Long said some roads don’t have a crosswalk for half a mile while some crosswalks are installed at an inconvenient spot, which leads walkers to go around to cross or jaywalk.

Hartford faced a surge in pedestrian traffic after the pandemic began. Restrictions on vehicular traffic on Pratt and Ann streets, bike lanes on Maple Avenue and other traffic calming measures enhanced safety.

“Even prior to the pandemic, there was an increasing recognition here in Hartford and elsewhere that roads need to belong to everyone and not just cars,” Mayor Luke Bronin said.

“We have a long way to go here in Hartford toward our vision of complete streets” that accommodate not only cars and trucks but also cyclists and pedestrians, he said, adding that “I would love to see those smaller-scale infrastructure investments in bike and pedestrian infrastructure become a more prominent part of the political discussion at the state and federal levels.”

Transportation officials are uncertain what demand for Connecticut’s transit services will be after the pandemic.

Connecticut had about 82 million passenger trips per year, spread almost equally between bus and rail, before the pandemic, Andreski said.

Travel on the MetroNorth rail line that links southwestern Connecticut with New York City plunged by 95% during March and April and was back to only 20% of normal by mid-September, according to the DOT.

Bus traffic dropped to 45% of normal this spring and had recovered to 80% by mid-September.

But while rail travel was dominated by financial services and other professional jobs — many of which could be performed remotely — buses were more commonly used by retail and other service workers whose remote options are few or none.

“No one has a definite answer,” Andreski said. “There are a lot of factors at play.”

But while the ridership projections are uncertain, advocates say what is clear is that transit services, like construction, will be in need after the coronavirus.

Gov. Ned Lamont tried to jump-start the transportation building program with a 2019 proposal to toll all vehicles and a 2020 plan to toll large trucks. Legislators opted not to act on either.

Lamont had no new solutions when asked about transportation one day after the Nov. 3 elections, but he said he won’t pitch tolls again in 2021.

“I came up with my best solution for what I thought was a transportation crisis,” he said, adding the coronavirus has only worsened things, with reduced travel meaning less fuel tax receipts.

But Wray said policymakers can wrangle over how to raise the funds all they want, but sooner rather than later, more dollars will be needed — or Connecticut’s economy will continue to suffer.

“Transportation access is a very strong accelerant for economic growth,” he said. “We are not breaking a sweat trying to work out the answer to this question. … The transit vs. roads argument ends up nowhere.”