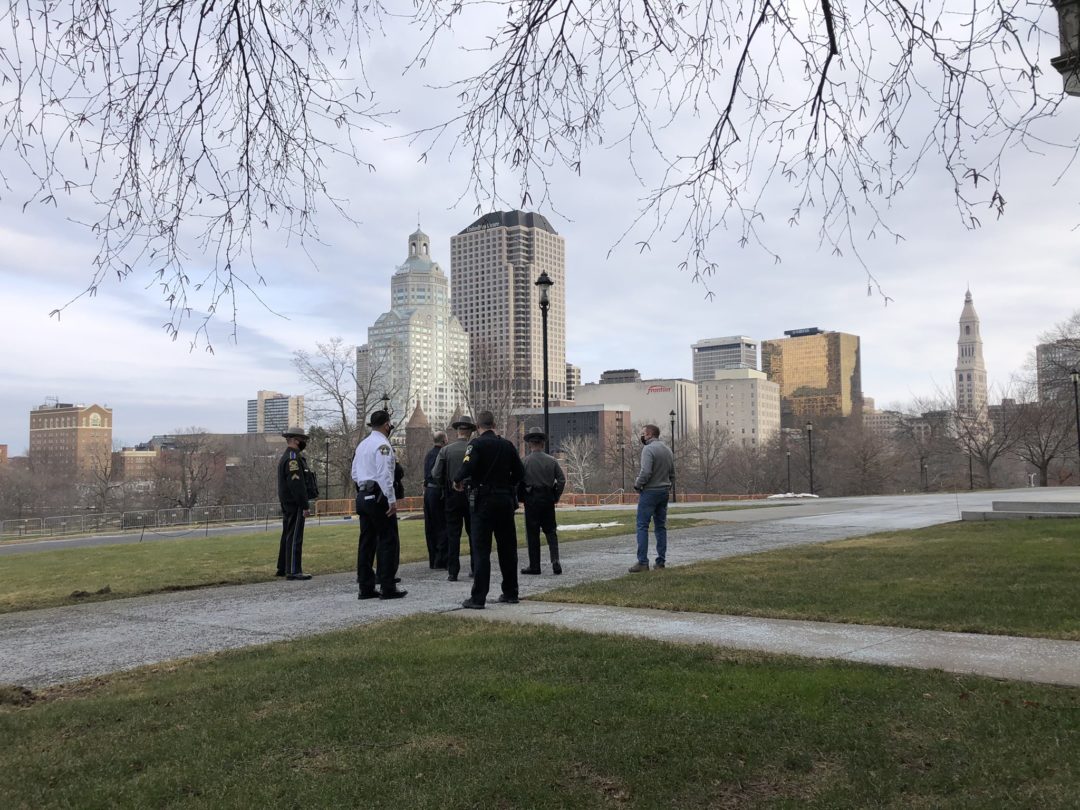 Members of the State Police and Capitol Police discuss security preparations at the state Capitol on Tuesday.

With news that supporters of President Donald Trump are planning armed marches in state capitals across the country this weekend, Connecticut leaders are preparing for potential unrest here, wary of the riot in Washington, D.C., last week.

“I think that anyone in government who saw what happened last week has to stay alert and aware, and we know preparations are being made here to ensure that that happens,” said Max Reiss, Gov. Ned Lamont’s spokesperson. “It’s kind of inconclusive what’s going to happen this weekend, but preparations are underway.”

Lamont announced Tuesday that more than 100 members of the Connecticut National Guard will be sent to Washington, D.C., to ensure there is a peaceful transition of presidential power. In addition, the state’s Air Guard has placed on alert C-130H aircraft and crews, which are capable of shuttling personnel across the country.

“The State of Connecticut stands ready to help ensure the peaceful transition of power and protect our democracy,” Lamont said.

As for keeping Connecticut residents safe, Reiss said the Department of Emergency Services and Public Protection is working with federal partners to review intelligence and stay head of potential threats, and that DESPP is also in talks with the State Capitol Police.

A picture shared on Twitter by Brian Foley, spokesperson for the Department of Emergency Services and Management, showed State and Capitol police gathered alongside DESPP, preparing for the weekend.

Confident in the preparation, coordination and safety of all. pic.twitter.com/0YhgmdHG5J

“CT DESPP is constantly monitoring events and information. We are confident in our preparation. We are sharing information with our local, state and federal partners. While we are very focused on the safety of all, at this point, we can not get into specifics,” Foley said in a text message.

One prominent lawmaker was the subject of a death threat earlier in the week.

CT News Junkie reported that a man named Greg Tubby threatened Sen. Gary Winfield, co-chair of the Judiciary Committee who led the charge over the summer to pass a police accountability bill in the wake of George Floyd’s death. Tubby, a Columbia resident, according to News Junkie, mentioned taking “justice in our own hands. Hopefully the sanitation system will pick up the carcass.”

The man left the comment on a post from Sen. Rob Sampson, R-Southington, who faulted Winfield’s committee for not “reversing any of the dangerous public policy that has led to the massive crime wave affecting our community.”

The FBI released preliminary 2020 crime data in September. They found that violent crime decreased in the Northeast in the first six months of the year compared to 2019, but nonnegligent manslaughter and aggravated assault rose by nearly 15% and 5%, respectively.

Homicides rose in cities across the country, not just in Connecticut, where Winfield’s police accountability was signed into law over the summer.

“Senator Sampson said that the recently enacted police accountability bill and other criminal justice legislation ‘undermined the rule of law’ and led to a ‘crime wave,'” Democratic Senate leaders Martin Looney and Bob Duff said in a press release. “This is the kind of incendiary, alarmist, reckless fear mongering that leads to what we saw at the U.S. Capitol last week.”

Winfield, a lawmaker for a dozen years who has worked on controversial issues including ending the death penalty, protecting members of LGBTQ communities and several police accountability measures, said he was no stranger to threats of violence. His work has focused heavily on issues of race, equity and criminal justice, all difficult issues that inspire a lot of passion in residents.

“People expect you to be more deferential than I am. And to be Black on top of it, you don’t see that all the time,” Winfield said. “I’ve had death threats, I’ve been run off the road, I’ve been physically confronted, I’ve had a stalker.”

Winfield said he had been offered a security detail. He is still mulling over whether to accept. He is trying to walk the line between being desensitized to threats of violence and understanding that “the world is changing.