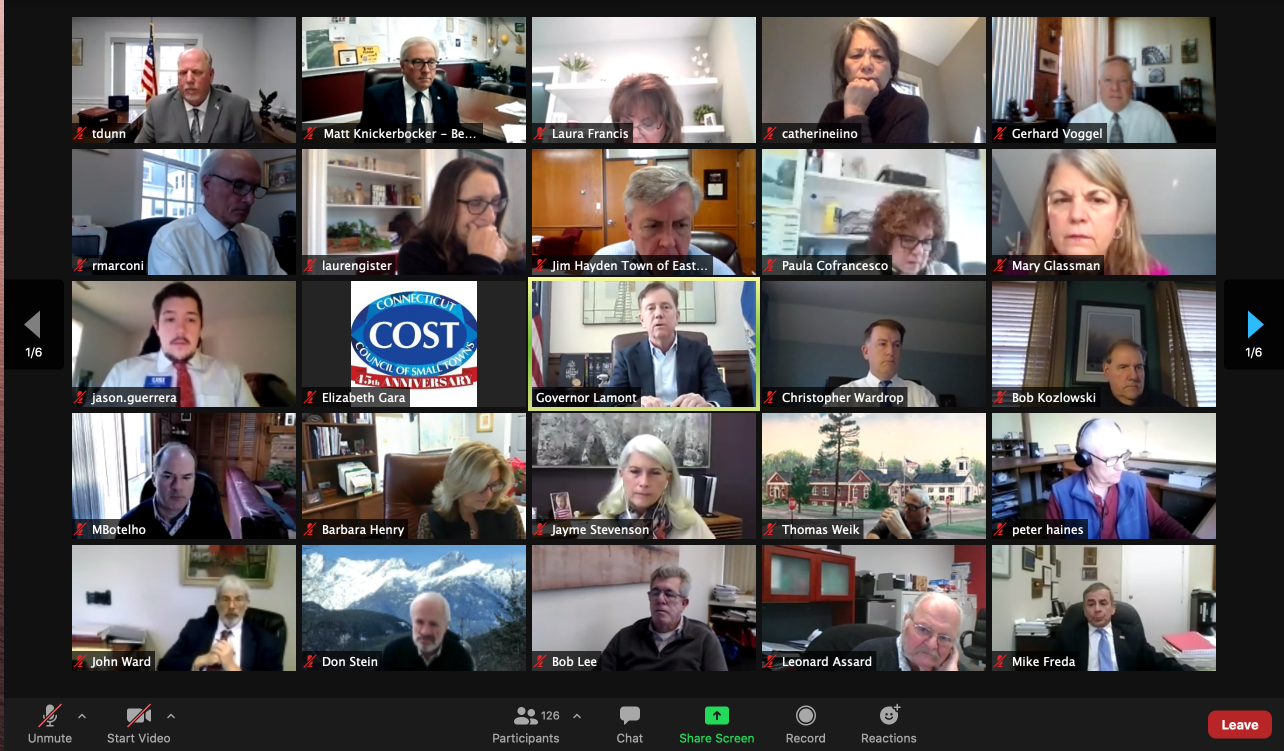 Gov. Ned Lamont has to close a whopping $4.3 billion deficit in the next two-year state budget, but he won’t make cities and towns bear the brunt of that fiscal pain.

Lamont told the Connecticut Council of Small Towns at its annual meeting Wednesday morning that he wouldn’t propose cuts to municipal aid, which totals nearly $3 billion per year. COST represents 110 towns with populations of 30,000 or less.

The governor, who was the keynote speaker at COST’s annual town meeting — held virtually this year — also said he won’t attempt to bill municipalities for a share of Connecticut’s massive teacher pension fund debt.

When questioned by Coventry Town Manager John Elsesser about possibly billing communities for a share of the $1.44 billion Connecticut owes to its cash-starved teacher pension fund next fiscal year — something Lamont and his predecessor, Gov. Dannel Malloy, both recommended in past years — Lamont ruled that out as well.

His new, biennial budget proposal is due to the General Assembly in early February.

Though Connecticut has performed better during the pandemic in terms of state budgeting than have most other states, analysts still project finances — unless adjusted — will run $2.1 billion in deficit in the fiscal year that starts July 1, and $2.2 billion in the red in 2022-23. Both potential gaps represent more than 10% of General Fund spending.

And while state income tax receipts tied to investment earnings have performed well during the pandemic, Connecticut’s overall economy remains fragile. The Department of Labor reported this week slightly more than 180,000 residents continue to receive weekly unemployment benefits, and state officials warn repeatedly that many restaurants and other hospitality sector businesses remain at risk of closing.

But municipalities have their own fiscal problems.

Responding to a state survey last spring, communities estimated that more than $400 million in revenue owed them — much of it involving property taxes — was either lost or deferred.

“It’s been such a tough year for our towns, residents and businesses that cuts in municipal aid or additional costs would be devastating,” she said. “Maintaining municipal aid and releasing funds in a timely manner will help position towns for social and economic recovery.”

Joe DeLong, executive director of the Connecticut Conference of Municipalities, praised Lamont for his pledge and for his “very positive working relationship” with local governments throughout the coronavirus pandemic.

But DeLong also warned that unless the governor and legislature consider tougher choices, Connecticut’s massive debt will contribute to more state budget deficits and remain a long-term threat to municipal aid.

According to Lamont’s budget office, Connecticut has nearly $92 billion in unfunded, long-term liabilities, and slightly more than two-thirds of that involves pension and other retirement program debt.

“Unless we’re at least willing to collectively admit this is a major looming challenge,” DeLong added, “it will hold the state back for many years.”

Also Wednesday, Lamont told the more than 120 municipal leaders at COST’s annual meeting that he would propose new legislation this year to require telecom companies to build new infrastructure to deliver broadband internet service to all residents.

“I think we’ve learned, I’ve learned, in a new way how important broadband is to our future,” the governor said, calling an expansion the key to keeping young families in Connecticut.

The pandemic has underscored the need to ensure more workers can perform their jobs remotely, he said.

“If you can do everything from … Brooklyn, Connecticut, you can do from Brooklyn, N.Y., you’re going to have a lot more young families” here, he added.