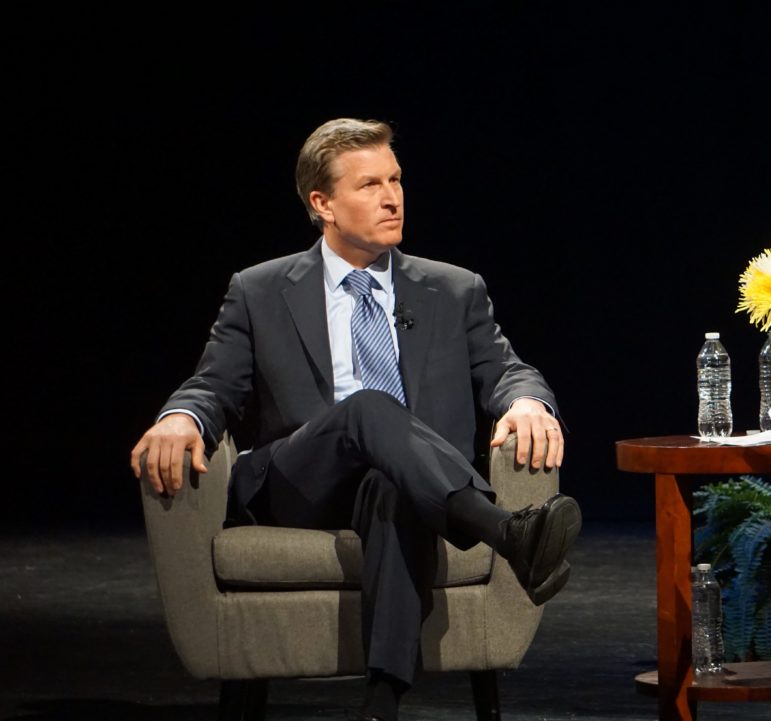 Steve Obsitnik, left, interviewed during his 2018 campaign on CPTV.

Former Republican gubernatorial candidate Steve Obsitnik will pay a fine of $90,000 to settle allegations he illegally coordinated with an independent-expenditure group formed by his backers to promote his 2018 candidacy. A state lawmaker who helped him will pay $10,000.

The payments by Obsitnik and state Rep. Jason Perillo, R-Shelton, are required by settlements approved Wednesday by the State Elections Enforcement Commission. Obsitnik’s fine roughly equates to the benefits he derived from FixCT, a political action committee formed by donors to his campaign.

The story reported that the chairman of FixCT was Scott C. DePetris, an early supporter of Obsitnik and one of his fundraisers, and that its primary funder was Thomas McInerney, a venture capitalist who also contributed to Obsitnik’s campaign.

The elections enforcement commission investigation found that Obsitnik played a role in the creation of FixCT, suggesting to DePetris the law firm that should be used by the PAC, and that Perillo had volunteered for Obsitnik’s exploratory campaign before becoming the communications strategist for FixCT.

In the settlement signed by Obsitnik on Tuesday in advance of the commission meeting, Obsitnik is described as being involved as early as September 2017 in talks with DePetris leading to the eventual creation of FixCT. He gave DePetris the name of the law firm that later would advise him on the creation of the PAC.

“He can’t meet but can talk,” Obsitnik told DePetris in an email, referring to a contact for the law firm, which was not identified. “Let’s talk first.”

Perillo talked to DePetris in December 2017 about forming the committee, and he suggested its name, FixCT, according to the settlement agreement. FixCT also was a slogan discussed in April 2017 by Obsitnik’s exploratory campaign.

Perillo said Wednesday in an interview and an email that he was an unpaid volunteer to Obsitnik’s exploratory campaign in 2017 and then to FixCT after its creation in 2018, which he did not consider coordination.

“I didn’t observe a single instance of coordination while I was volunteering on the committee and certainly didn’t engage in any,” Perillo said. “My wife and I decided to pay the fine and move on. $10,000 is a lot less than $50,000 or more in legal fees.”

DePetris and the committee’s treasurer, Lawrence McGonegal, a trader from Greenwich, each had previously agreed to settlements, with DePetris paying a $20,000 fine and McGonegal paying $5,000.

Obsitnik, an Annapolis graduate, former Naval officer and tech executive, finished last in a five-way primary for the GOP gubernatorial won by Bob Stefanowski. Obsitnik was hobbled by his late qualification for $1.3 million in public financing.

Theoretically, the commission could have taken the unprecedented step of seeking the return of the $1.3 million.

Ryan Burns, a staff attorney, told the commission in a meeting conducted via video conferencing that from Jan. 24, 2017 to Dec. 24, 2017, Perillo advised “Obsitnik and his campaign for governor in the form of numerous emails, attending a campaign meeting and attending at least one campaign conference call.”

Obsitnik became an official candidate for governor on Oct. 1, 2017, when he created his campaign committee. Registration papers creating FixCt were filed April 20, 2018.

“Respondent Perillo was involved in the design and drafting of every communication published by FixCT, Inc in support of Stephen Obsitnik, and on April 24, 2018, stated that he was handling the spend side for the committee,” Burns said, reading from the settlement.

According to the settlement agreement signed by Perillo, Obsitnik was aware of plans for FixCT before they became public: On March 27, 2018, Obsitnik informed an unnamed associate that Perillo was going to be involved with an independent expenditure group supporting his campaign.

Neither Obsitnik nor Perillo acknowledged wrongdoing under the settlements.

Obsitnik declined to take questions, but texted a statement denying the allegations in the settlement.

“The claims lack merit. It would take years and millions of dollars, especially for taxpayers,” he said. “It just doesn’t make sense to fight. It is just time to move on.”

The investigation also concluded that Obsitnik used a non-profit, Imagine Connecticut, to illegally promote his candidacy in the summer of 2016 before he had formed either an exploratory committee or campaign committee, necessary steps to legally explore or pursue a campaign for public office in Connecticut.

An unnamed consultant to Imagine Connecticut did research clearly geared to a run for governor, according to an email obtained by the commission. It contained a spreadsheet with town-by-town gubernatorial results going back to 2002, assessing the winning campaigns of John G. Rowland and M. Jodi Rell and the two losing efforts of Tom Foley.

“This is giving us a good clue as to where to begin focusing your efforts to build a coalition based on what districts were necessary for Rowland & Rell to win, versus where Foley floundered,” the consultant wrote on to Obsitnik on July 11, 2016. “Doing this through a methodical and data-driven manner will help keep your effort and budget focused.”

Obsitnik did not form his exploratory committee until January 2017.

Independent-expenditure groups, which allow donors to bypass limits on direct contributions to campaigns, are the product of one of the great inconsistencies in U.S. campaign finance law.

The U.S. Supreme Court has found that direct contributions to a candidate are potentially corrupting and therefore can be restricted. Contributions to independent committees, even ones with the same objective as a candidate committee, are expressions of speech, subject to no limit.

The result in Connecticut, where a publicly financed candidate for governor could accept a maximum direct contribution of $100 in 2018, is that $101 to a candidate is potentially corrupting, but $100,000 to a PAC dedicated to that same candidate is legal.

Candidates not participating in the public financing program could accept maximum contributions of $3,500.

The two decisions have given rise to independent-expenditure groups that play outsized roles in presidential campaigns, such as American Crossroads, the pioneering Super PAC overseen by Karl Rove, and increased the importance of wealthy contributors like McInerney.

McInerney has given at least $2.3 million to federal Super PACs since 2010, according to Federal Election Commission filings, including $600,000 to American Crossroads and $670,000 to the Congressional Leadership Fund, which supports U.S. House Republicans.

But while a candidate can be supported by a dedicated Super PAC, there must be no coordination.