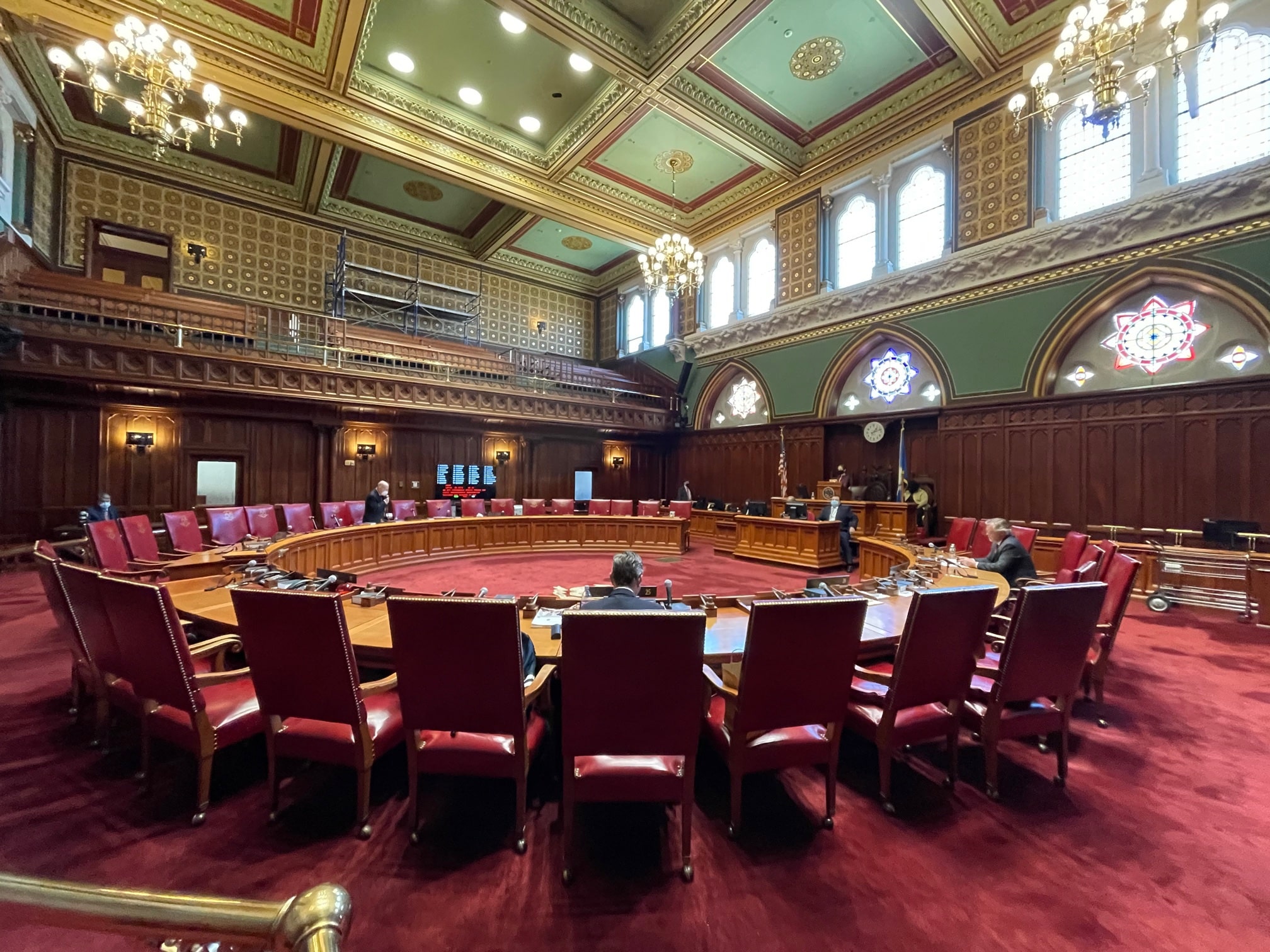 A day after the state Supreme Court upheld the constitutionality of Connecticut’s emergency power laws, the Senate voted Tuesday for final passage of a bill that ratifies Gov. Ned Lamont’s pandemic declarations and extends his authority by one month until May 20.

The party-line vote for the bill, as well as the rejection of a Republican amendment that would have required legislative ratification of any emergency lasting longer than seven days, underscored a partisan divide over how power has been granted to Lamont during the pandemic.

The Republican minority has grown more outspoken over the Democratic governor’s emergency powers while focusing on the process granting them and not his specific orders, such as the continued requirement for wearing masks as a precaution against the spread of COVID-19.

“We are a co-equal branch of government, and it’s time for us to act that way,” said Sen. Paul Formica, R-East Lyme, the deputy GOP leader.

But no Republican took exception to any of the executive orders Lamont has issued during his management of the pandemic under the terms of extraordinary powers contained in the state’s civil preparedness and public health emergency statutes.

“Let me start by saying I don’t think there’s a person serving in this chamber that believes this is about an abuse of power,” said Sen. Craig Miner, R-Litchfield.

The Senate voted 24-10 to pass the bill and 23-10 to reject the Republican amendment. Democrats hold a 24-12 majority. Republicans Kevin Kelly of Stratford and John Kissel of Enfield were absent. Democrat Dennis Bradley of Bridgeport missed the amendment vote.

As was the case in the House, the Senate came together to vote unanimously to place in state law a one-year extension of the governor’s most popular executive order: a decree that simplified the process for restaurants to get approval for outdoor dining, a life-saver for many eateries.

The legislative action comes as the pandemic has plateaued, then crept upward, prompting fears of another surge.

President Joe Biden pleaded Monday for governors to maintain requirements for wearing masks and social distancing in public, while some of the most populous states, including Texas and Florida, are easing or eliminating those restrictions.

Connecticut recorded 3,229 new cases and 18 deaths over the weekend, then another 1,1617 cases and two more deaths on Monday. Hospitalizations were up 20 on Tuesday, topping 500.

“So, we know that our work is not done,” said Senate Majority Leader Bob Duff, D-Norwalk.

Connecticut is outpacing most states in inoculating residents against COVID-19, giving hope after a year in which more than 7,800 deaths have been attributed to COVID. As of April 1, everyone 16 or older will be eligible for vaccination.

“Many of us now see the light at the end of the tunnel, but we are still in that tunnel,” Duff said.

Lamont said the authority was necessary.

“This step is critical to ensuring our vaccine and testing programs remain nimble and accessible to all of our residents, and we can continue to provide needed support for everyone in Connecticut as we work to get back to normal as quickly as possible,” Lamont said in a statement.

Senate President Pro Tem Martin M. Looney, D-New Haven, said the state’s highest court has concluded that Lamont has been acting under authority granted him in state law and that the legislature had not improperly delegated its authority to the executive branch.

The bill adopted Tuesday gave the stamp of approval by the legislature to all three declarations, plus the extension of the current emergency from April 20 to May 20.

Sen. Kevin Witkos, R-Canton, said there was no reason why the legislature could not be summoned within 14 days to ratify any emergency declaration, as proposed by the Republicans.