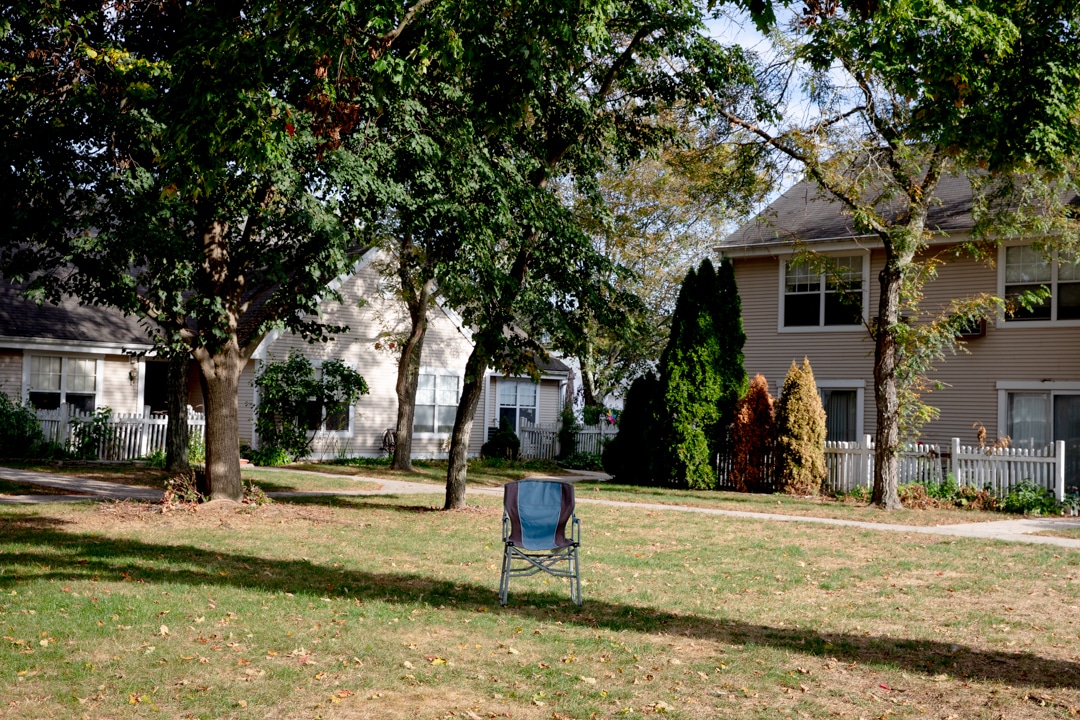 An afternoon scene at the apartment complex on Lucy Street. It is one of the few affordable housing units in Woodbridge.

A key committee of the General Assembly advanced legislation Wednesday that would require municipalities to open more affordable housing — or face consequences — while gutting a key component of another controversial bill that would have allowed multi-family housing to be developed near train stations without special approval from local officials.

Other bills approved Wednesday by the Planning and Development Committee would require training for the volunteers who serve on local planning and zoning commissions and would prevent them from being able to consider the impact a housing project would have on the “character of the community.”

The bills are now headed for consideration by the state House of Representatives and Senate, despite being what lawmakers described as “very much a work in progress.”

“I expect that we will be spending a lot of time together over the next couple of months working to get to the best solutions possible and really addressing the affordability crisis that we face in our state,” said state Rep. Cristin McCarthy Vahey, D-Fairfield, the House chair of the committee.

Wednesday’s vote follows a contentious 24-hour hearing earlier this month on legislation that aims to remedy the high housing costs and segregation that exists in Connecticut’s wealthiest communities. The bills tackle exclusionary zoning practices that inhibit developers from building more affordable housing and block the people who need it from moving into their communities.

Compared to other states, Connecticut comes in 49th place for building housing.

The vote also comes the same day President Joe Biden released details of his American Jobs Plan that, among other things, calls on Congress to pass legislation that would link funding to states and municipalities that eliminate exclusionary zoning laws.

“For decades, exclusionary zoning laws – like minimum lot sizes, mandatory parking requirements, and prohibitions on multifamily housing – have inflated housing and construction costs and locked families out of areas with more opportunities,” a fact sheet released by the White House reads. “President Biden is calling on Congress to enact an innovative, new competitive grant program that awards flexible and attractive funding to jurisdictions that take concrete steps to eliminate such needless barriers to producing affordable housing.”

Republican legislators were relieved that one of the key provisions being pushed by the land-use advocacy group Desegregate CT didn’t make it out of committee. That proposal — Senate Bill 1024 –would have allowed the construction of multi-family developments close to a town’s main train station and two-, three-, and four-unit developments in the downtown corridor — without a developer first needing to go through a public hearing and winning approval from the local planning and zoning board.

“I’m very happy to see some of the more controversial and troubling parts of this bill removed,” said freshman state Rep. Kimberly Fiorello, R-Greenwich. “I think that’s a great relief to a lot of people who are very concerned about the impact to their towns and their inability to have any say in that, so I think that is just a real wonderful move on behalf of this committee. … We still have to pay attention to the different bills, and we still have dummy bills before this committee where the things that have been removed from 1024 can be reinserted.”

Desegregate CT and other housing advocates hope that allowing multi-family housing around train stations and main streets is not dead this legislative session. The committee did forward several of the organization’s proposals to allow accessory dwelling units — small units that often turn a garage, basement, or section of a large home into a separate housing unit — to be built without needing special permission from local officials.

“We are very grateful to the Planning and Development Committee for voting favorably on so much of SB 1024,” said Sara Bronin, founder of Desegregate CT. “This vote was an important procedural step, but the committee indicated pretty clearly that the conversation would continue, so we will continue to advocate for the need and the importance of transit-oriented and main street development. We think those will help increase housing supply and diverse housing options for many communities across the state. It is amazing and great what they did do.”

A separate controversial bill that was approved by the committee and has the support of House Majority Leader Jason Rojas, D-East Hartford, could completely change the landscape of where affordable housing is primarily being built in the state.

That bill attempts to respect local control while holding towns accountable for their obligations under the federal Fair Housing laws. The bill would leave it entirely up to municipalities to determine how to provide their so-called “fair share” of affordable housing in a region, but would attach strict enforcement mechanisms if a town’s plan or implementation is not ambitious enough. The fair share would be determined after a housing-needs assessment is completed and overseen by the state. After that, each town would be required to provide a specific number of affordable housing units to meet that need.

The plan is modeled after the Mount Laurel case in New Jersey, where the courts required towns to provide low-income residents the opportunity to live in their communities.

“This is a significant policy agenda that looks at really significantly advancing affordability and the access to deeply affordable units for residents,” said Vahey.

Republicans on the committee, however, were not supportive.

“I have concerns about the judicial functions of this bill and feel very strongly that it functions almost like a consent decree on municipalities” said Rep. Joe Zullo, R-East Haven, the ranking minority leader of the committee. “I fear that it’s going to drastically increase the size of the land use docket by essentially compelling municipalities to go to court, even if it’s just to get a judgment of compliance.”

Housing options for low-income residents are overwhelmingly located in high-poverty and segregated neighborhoods in Connecticut. An investigation by the CT Mirror and ProPublica last year found that this imbalance is the result of HUD and state officials sitting on the sidelines while many neighboring communities refuse to allow for the construction of reasonably priced apartments or duplexes. The investigation also found that  landlords are refusing to accept vouchers as a form of payment, despite state law forbidding such discrimination.

“Anyone who received any [U.S. Department of Housing and Urban Development] funding must analyze patterns of racial segregation and unequal access to housing for people of color, immigrants, people with disabilities and other protected groups, and they have to take proactive means to address those patterns,” said state Rep. Roland Lemar, D-New Haven.

But some legislators have made clear they don’t believe there is a problem in Connecticut.

“People can move where they want. Zoning is not the issue,” said Rep. Doug Dubitsky, R-Chaplin. “Not everybody in every economic level can live in every neighborhood. I cannot live in Greenwich, there’s no reason why Greenwich needs to change itself so I can live there. … Is that what New Haven is proposing: to dump a lot of its poor people out of New Haven, into the adjoining towns, in order that it can be gentrified?… Low income people from New Haven, they’d be moving out of New Haven, and coming to the suburbs and the rural areas?”

Data from the U.S. Department of Housing and Urban Development shows that those who live in the high-cost communities are predominantly white.