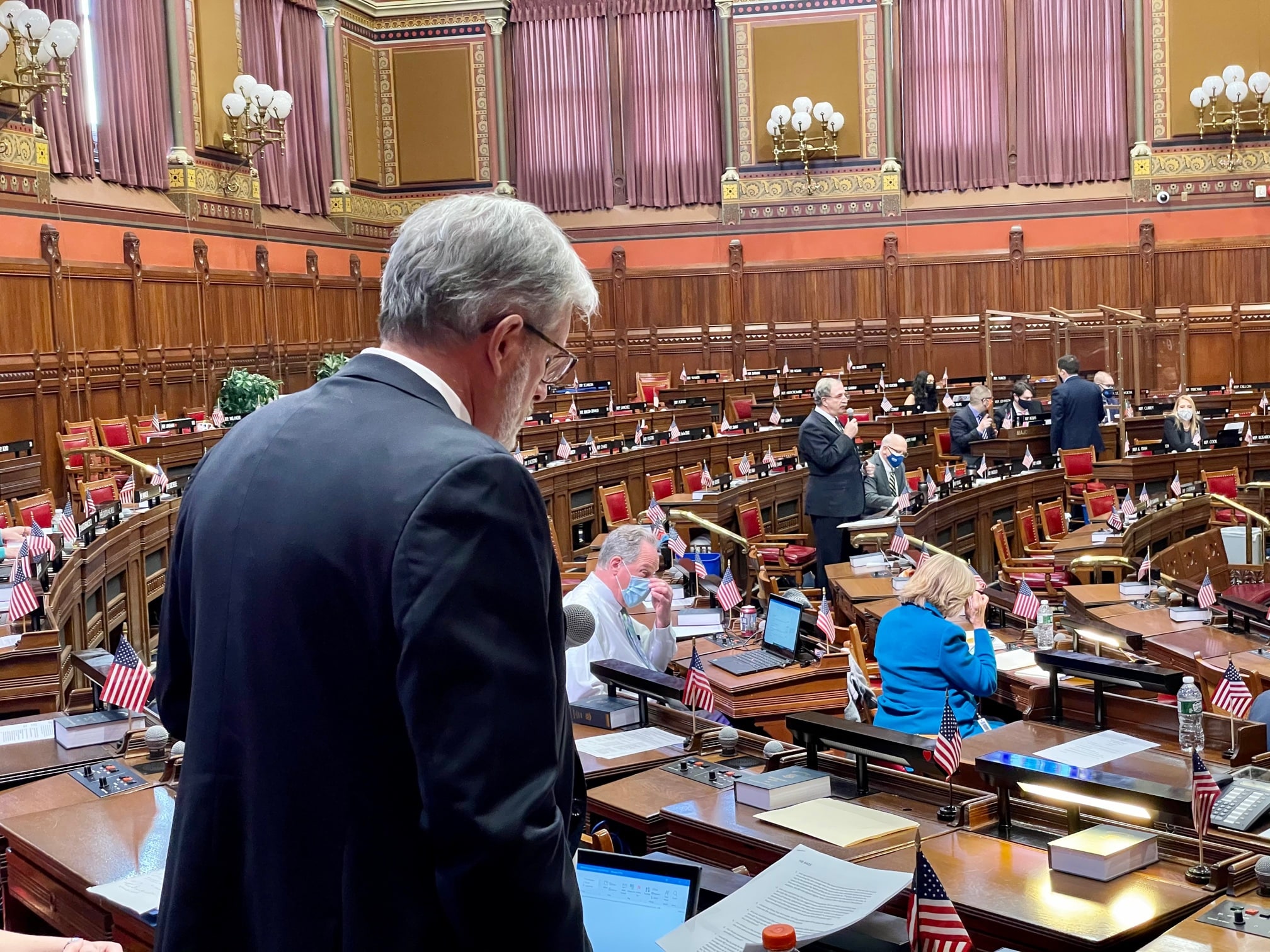 The state House of Representatives approved a bill early Tuesday that would remove Connecticut’s religious exemption from mandatory school vaccinations, a major step for a hot-button proposal that has been raised three years in a row with no vote in either chamber until this week.

“Because we’re in the middle of a health crisis, we need to take a firm stand on the efficacy of vaccinations,” said Rep. Henry Genga, an East Hartford Democrat. “We need to keep our most vulnerable residents in our decision making, always. This policy will help prevent the spread of illness and disease to those who are most vulnerable – those who have diabetes, autoimmune diseases, who make up many of our neighbors. While they cannot be vaccinated, we must do what we have to do to protect them.”

The bill passed by a vote of 90 to 53 after 16 hours of debate. Seven legislators were absent. The proposal drew overwhelming support from Democratic lawmakers, with a handful of Republicans crossing the aisle to join them in advancing the measure.

Gov. Ned Lamont has said that if the bill were to clear both chambers, he would sign it. 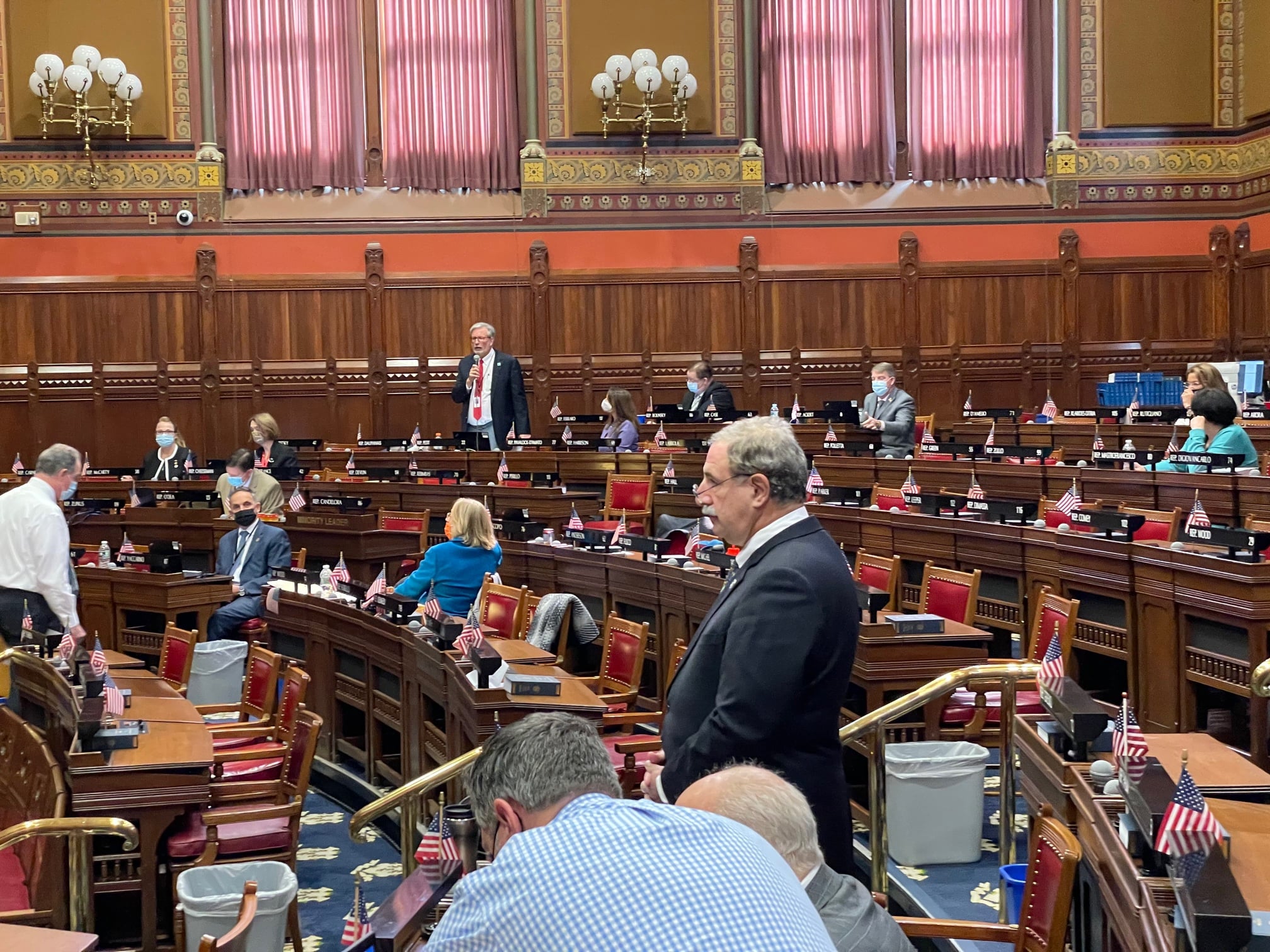 The proposal would erase the state’s religious exemption beginning on Sept. 1, 2022. Children in pre-kindergarten, day care or those new to the school system would no longer be able to claim the exemption starting that day. Children who are in kindergarten through 12thgrade would still qualify for the remainder of their academic careers.

An amendment allowing K-12 students to continue claiming the religious exemption passed earlier in the day Monday. Under a previous version of the bill, only those in seventh grade and up would have been permitted to keep claiming the exemption.

Authors of the original proposal drew the line at seventh grade because of state data showing a larger number of children in younger grades opting for the religious exemption. But legislators said Monday that the protection should extend to students in kindergarten and older. Families who enrolled their children in school under the current rules should be able to stick with the original policy, they argued.

“We know that there is a trend. And the reason why there is a grandfathering amendment is we recognize the trend will take some time to truly become dangerously impactful,” said Rep. Michelle Cook, D-Torrington, a proponent of bill. “It is not necessarily with the group of children that are enrolled in school now, but with those who are younger, that [religious exemptions] continue to rise. And so what we are doing is putting a pause – or, as some of my colleagues like to say, shutting off the spigot – and saying that from here on out, your children should be vaccinated” or be homeschooled.

Along with removing the religious exemption, the bill requires the state’s public health commissioner to annually release school-by-school immunization data; helps parents who cannot afford vaccines for their children by mandating that cities and towns cover the expense; and creates a board that will review Connecticut’s vaccine program and issue recommendations.

Several Republican lawmakers criticized the measure on Monday, questioning why younger children were deemed a “threat” while older students could continue claiming the exemption. Some argued the change should also include those in day care and pre-kindergarten, saying the bill would divide families.

Rep. Gale Mastrofrancesco, R-Wolcott, expressed concern for the parents of children in day care and pre-kindergarten, along with those whose kids will enroll in school in the future.

Data from the state Department of Public Health show that in the 2019-20 school year, the most recent available, 683 children enrolled in pre-kindergarten claimed the religious exemption. 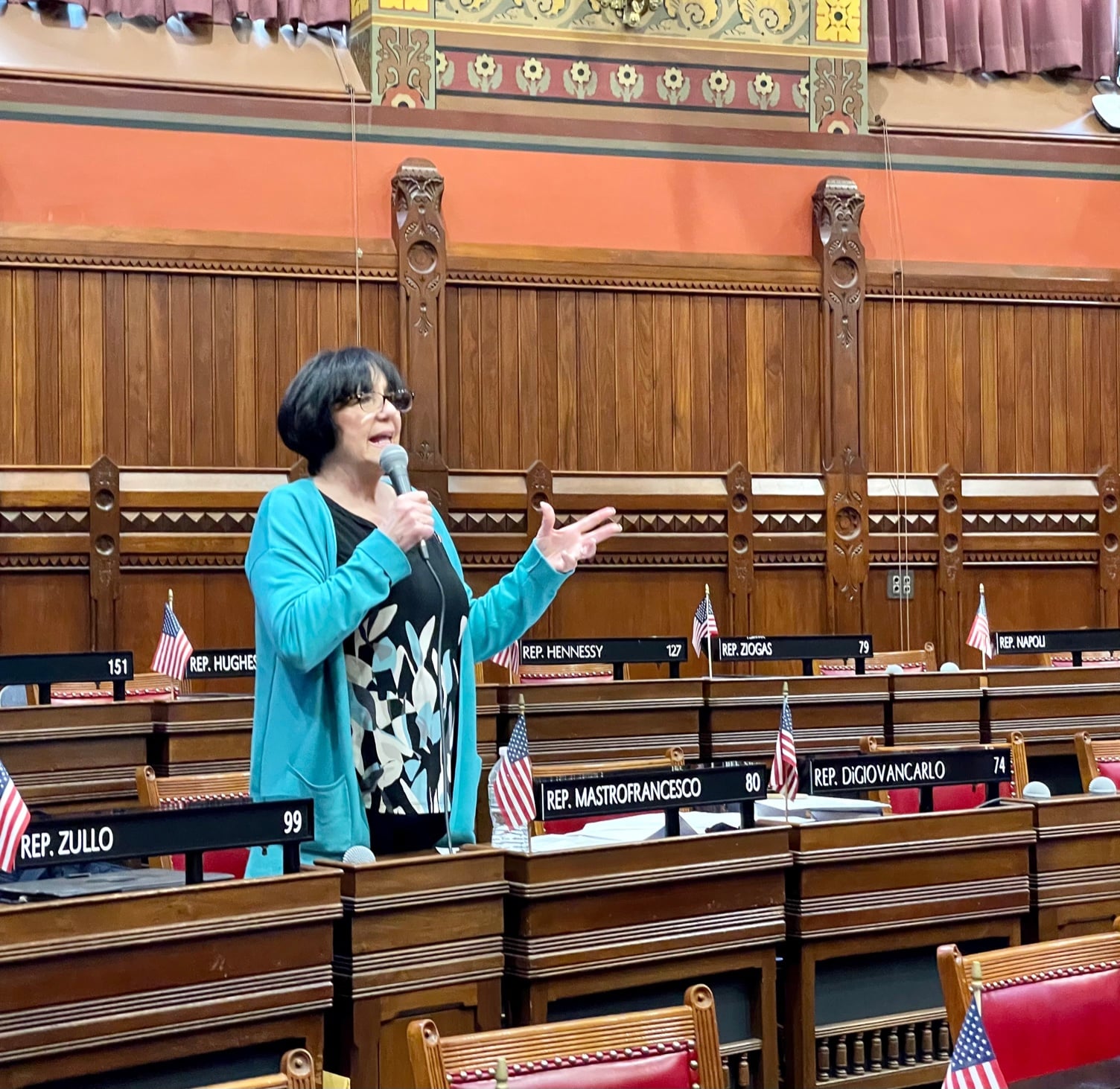 Rep. Gale Mastrofrancesco criticizes an amendment to the religious exemption bill during the House session Monday.

“What are these parents supposed to do?” Mastrofrancesco said. “Are they supposed to quit their jobs? Because their children will be segregated from the community.”

“I call this whole bill segregation,” she added. “It’s discrimination. We are picking winners and losers.”

“This concept of grandfathering doesn’t make a bad bill better,” she said. “We’re trying to salvage whatever we can from a crappy, horrible bill. … We’re attacking the religious beliefs of individuals in this state.”

Proponents of the measure have cited concern for immunocompromised students who cannot be vaccinated for medical reasons. But Dauphinais questioned Monday whether those children should be attending school.

“The immunocompromised who are very, very fragile, who would be at a threat to get anything – I would argue shouldn’t even be in school,” she said. “We’re talking about children with leukemia, perhaps children on chemo, children who could be deathly affected by someone who had a cold or strep [throat] or any other things that go throughout the schools.”

Republicans entered 50 amendments to the bill Monday, proposing everything from a requirement that the General Assembly approve any new vaccines added to the state’s mandatory immunization list to a directive that the health department produce a report detailing the bill’s impact on minority children and those who qualify for free school lunches.

Seven amendments were raised and only two were successful – the bipartisan change allowing K-12 students to continue using the exemption, and a Republican proposal permitting K-12 children who transfer schools to keep claiming the religious exemption. 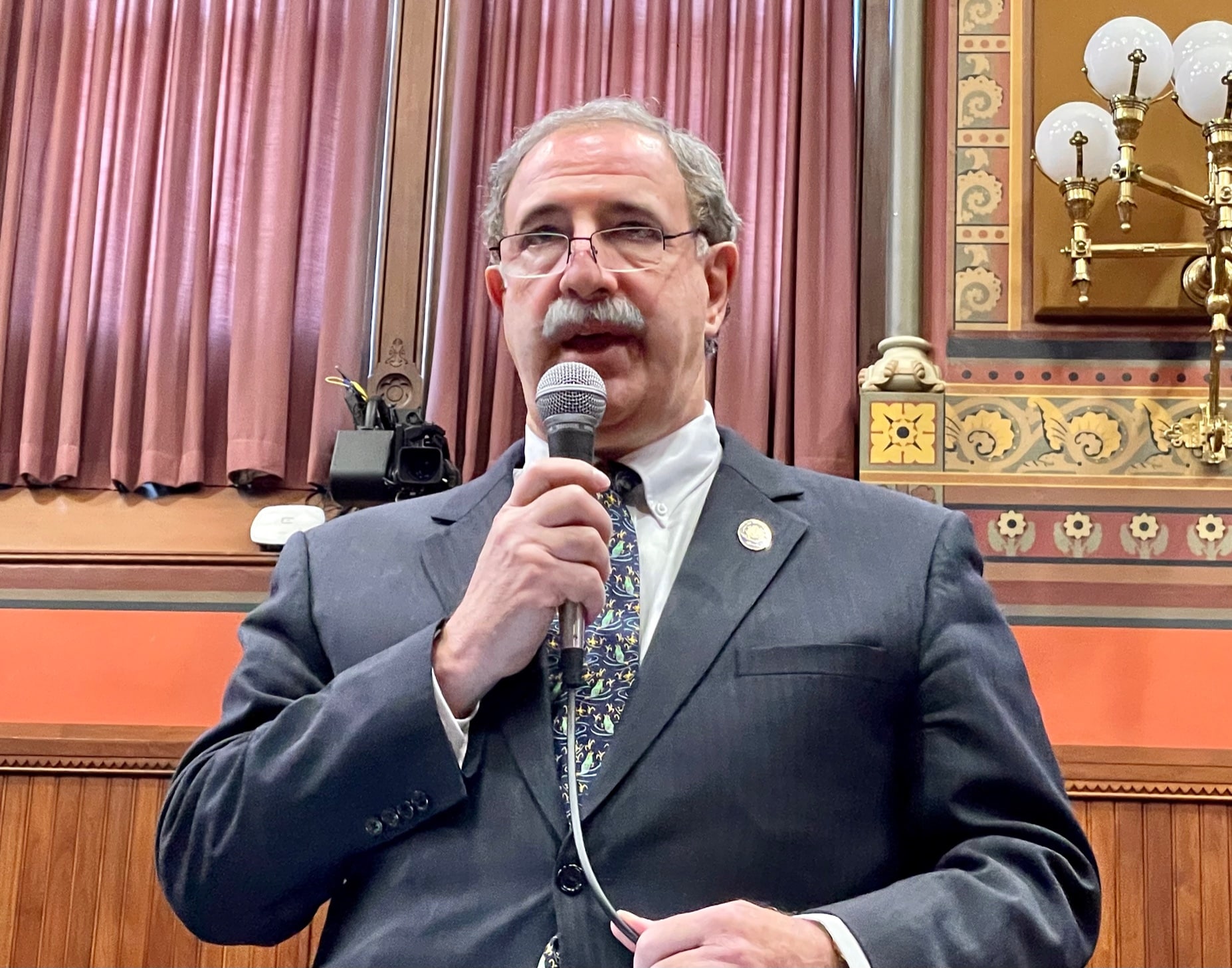 Steinberg testifies in favor of the bill.

Rep. Jonathan Steinberg, a Westport Democrat who is a co-chair of the Public Health Committee, pointed to the rising number of students claiming the exemption each year as a reason he supported the bill.

“The trend line for vaccinations is incontrovertible,” Steinberg said. “It’s clear that the situation is not getting better, it’s getting worse.”

Rep. Mary Mushinsky, D-Wallingford, said the state should be watching out for all children, especially those who have compromised immune systems.

“We live in a community, not an island, and that’s why this bill is important,” she said. “A particular group we’re interested in is those who cannot be vaccinated because of some serious medical reason; for example, they’re a cancer survivor, they have an immune disorder, they have a genetic disease. There’s a small number in each classroom that cannot be vaccinated and for their sake we need to vaccinate everyone else in their community.”

If the bill clears the Senate and is signed into law, Connecticut would become the sixth state without a religious exemption. New York, Maine, Mississippi, West Virginia and California do not have the vaccine exemption; 45 states and Washington D.C. do, according to the National Conference of State Legislatures.

The measure would not force children to be immunized; children in day care and pre-kindergarten, along with those entering the school system in the future, would be home schooled if their parents choose not to vaccinate them for religious reasons. 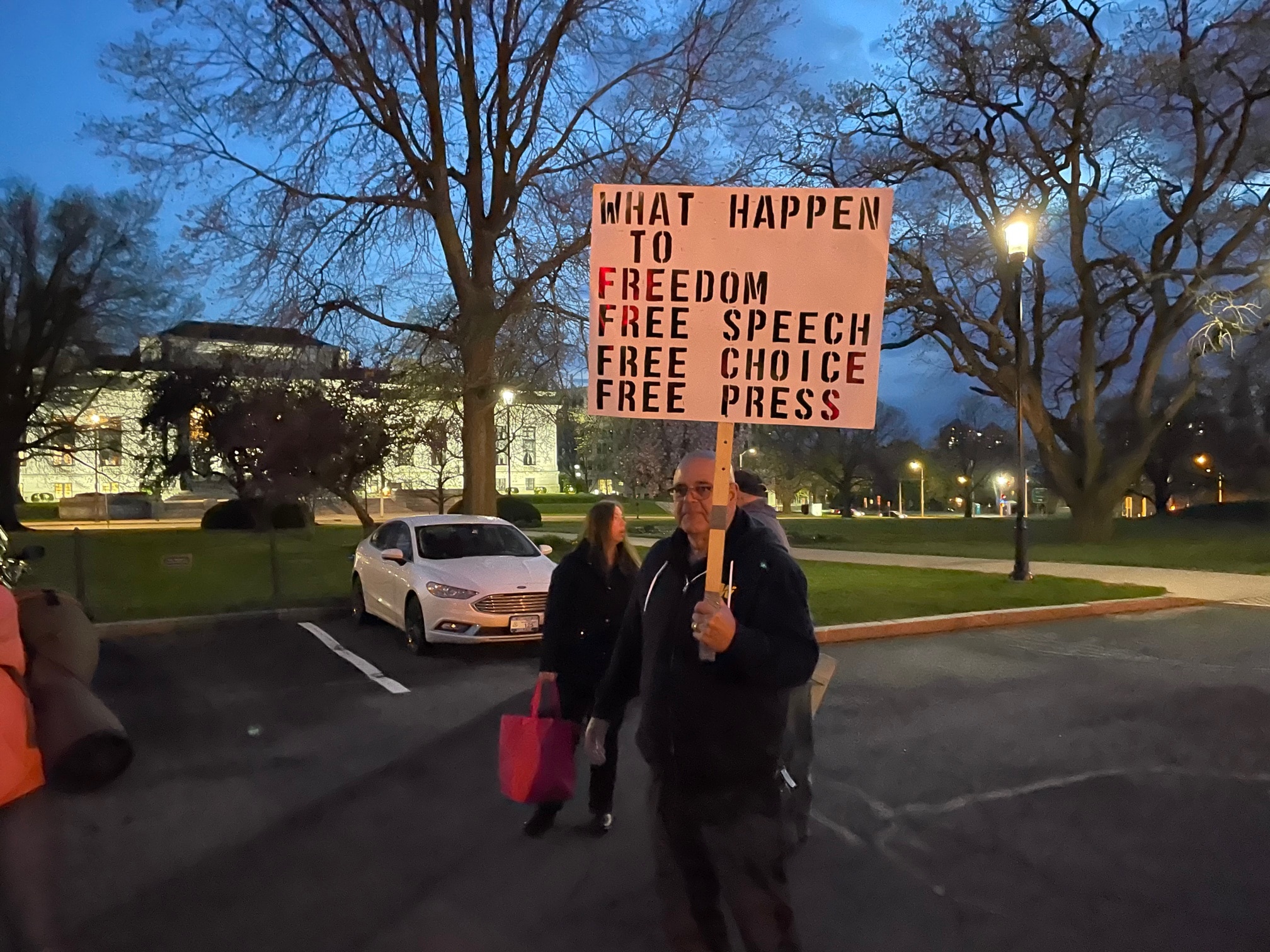 Protesters gathered outside the state Capitol Monday evening as the House debated the religious exemption bill.

Lamont reiterated his support during a news conference Monday.

“I would sign it,” he said of the measure. “We have learned, over and over again, over the last six months that vaccinations work; vaccinations keep me safe, keep us safe, keep my classroom safe … I’m ready to support that bill.”

Leaders in the Senate have said they plan to vote on the bill by the end of April.

Senate President Pro Tem Martin Looney told The CT Mirror in March that a majority of legislators in his chamber were in favor of the proposal.

“I believe we have the votes in the Senate to pass a strong bill,” he said. “I think people, over the years prior to the pandemic, had become a little too casual about some very serious diseases because they no longer saw them having an impact. We’re now seeing the impact of a disease that went close to a year without having an effective vaccine. That should create a climate of greater support for broad-based vaccinations.”