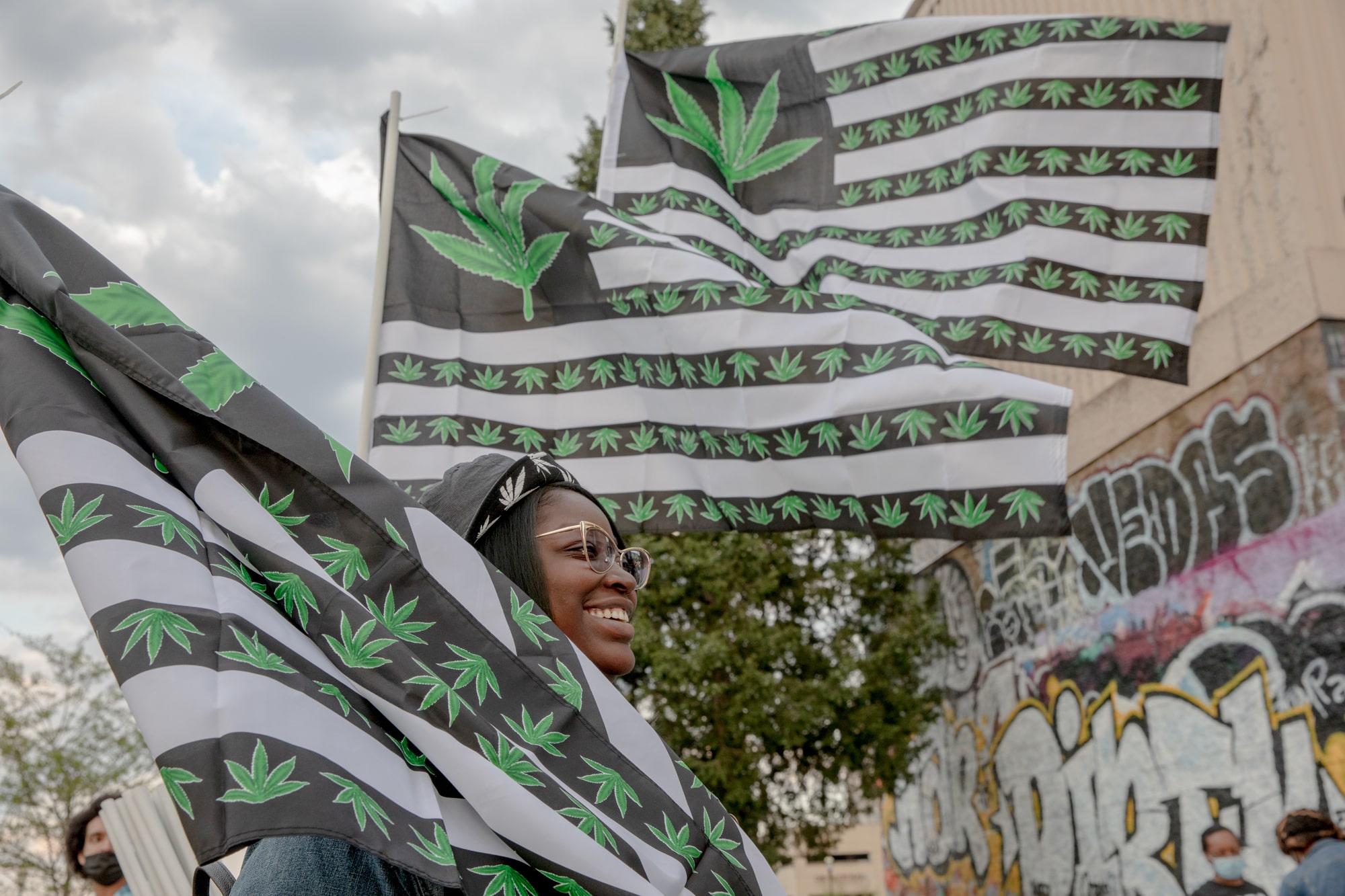 A group of supporters of legalized pot gathered at the Heaven Skate Park Tuesday. Above, a Hartford resident, who didn’t want to be named, holds a flag with cannabis leaves. “We need that legalization ASAP. Weed is not the problem,” she said.

Outside the Legislative Office Building, passionate backers of legalizing marijuana delivered an ultimatum unlikely to get far inside the building: Decriminalize the possession of any amount of cannabis, not just the 1.5 ounces favored by Gov. Ned Lamont.

Cannabis perfumed the air in Minuteman Park on 4/20, the unofficial holiday for the celebration and consumption of pot. The rhetoric was blunt, often angry, occasionally vulgar and always loud, at least until the portable generator powering a sound system ran out of gas.

The Democratic governor who proposed a legalization bill, Senate Bill 888, was alternately insulted or ignored at the gathering of several dozen people, where three sympathetic lawmakers counseled taking a hard line without compromise.

“This is what moves bodies in the building, y’all,” said Rep. Robyn Porter, D-New Haven.

Separating the governor from the crowd are definitions of what constitutes social equity and what lines should be drawn between the legal sale of cannabis regulated and taxed by the state and that proffered by illegal dealers.

Porter and Rep. Anne Hughes, D-Easton, who is co-chair of the legislature’s Progressive Caucus, each demanded an all-or-nothing view of decriminalization: The sale and possession of marijuana should be regulated, but not subject to criminal prosecution in any amount.

The governor’s bill is geared to creating a regulated commercial market and would maintain criminal penalties for the trafficking and sale of black-market cannabis, ban home-grown weed and subject repeat offenders to jail time for possession of more than 2.5 ounces.

“That’s not legalization. That’s reclassification, and we’re not standing for that,” Porter said. “We don’t want nobody trying to figure out how to keep us down. If you’re going to do this, and you want to talk about equity, then do it in real time. Do it like you mean it.”

“If you’re Black, you’re brown and taken to jail and charged because you’ve got three ounces, that’s not ending prohibition,” Hughes said. 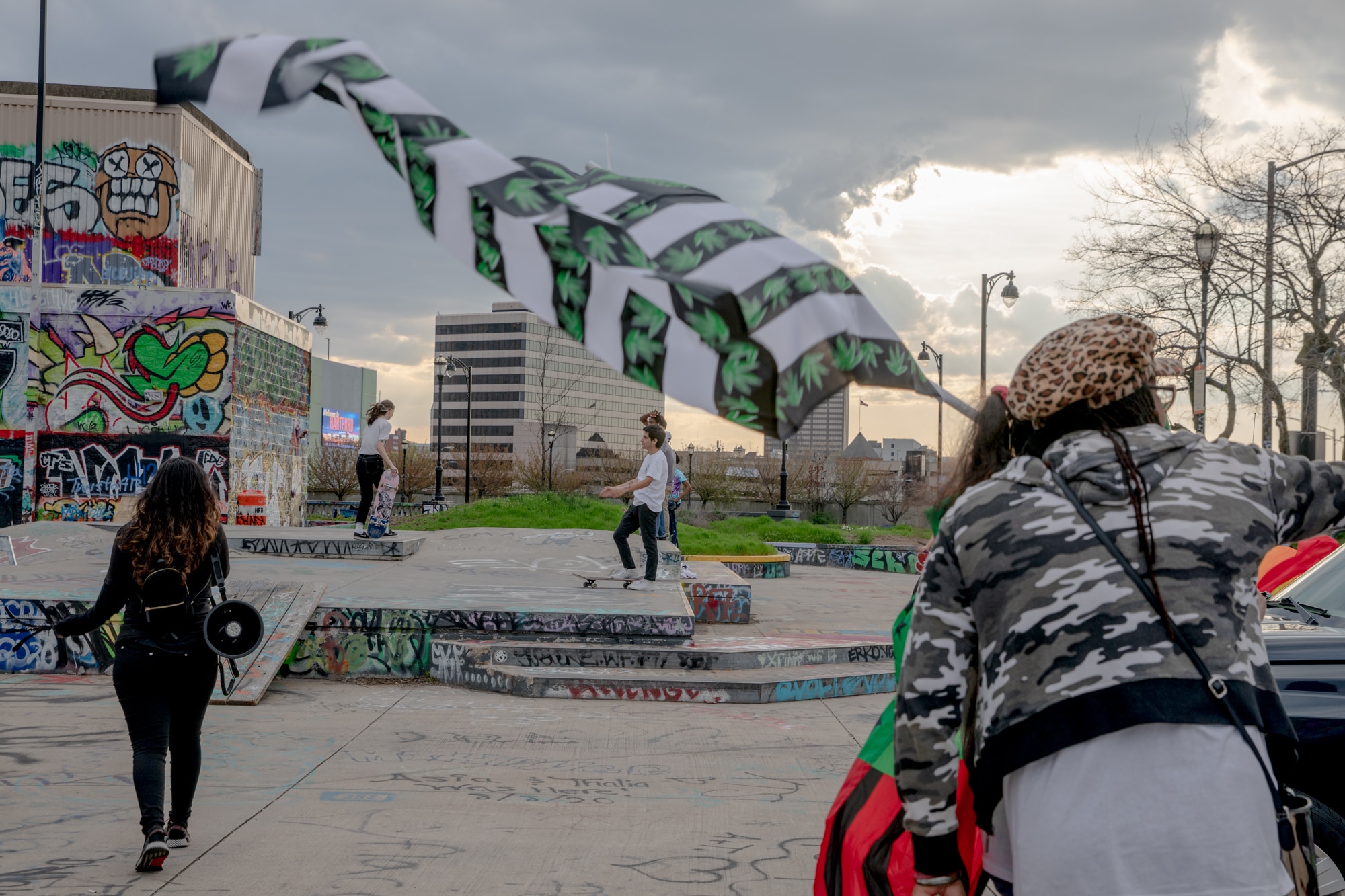 “We wanted to rally in support of Robin Robyn Porter’s bill, HB 6377. We are opposed to SB 888,” said Ivelisse Correa, a member of BLM 860, holding the flag in the image. “We support this bill only because it brings immediate equity along with legalization. It does not make us wait. People are still being criminalized. And they’re mostly people of color for marijuana violations.”

An alternative proposed by Porter and Sen. Julie Kushner, D-Danbury, the co-chairs of the legislature’s Labor and Public Employees Committee, is contained in a bill sitting on the House calendar. Among other things, it would allow the home cultivation of up to six flowering marijuana plants.

Both said in interviews that a compromise is possible on a range of issues, though lifting all criminal penalties for importing and selling unregulated cannabis probably is not among them.

“I don’t know that that’s a widely held view,” Rojas said. “It’s a conversation I’ve had with Rep. Porter. Should you be able to drive around with a pound of pot, and that be OK? I don’t think that’s a broadly held view.”

Winfield, who is Black, has said he certainly understands the sensitivity in the African-American community about how minorities have been disproportionately affected by the criminal prosecution of marijuana offenses.

But a legalization bill that allows a trafficker to move hundreds of pounds of cannabis while risking only a civil fine probably is going to have limited appeal in the General Assembly, Winfield said.

“I don’t think that gets them votes,” Winfield said.

Perhaps not even Porter’s co-sponsor and co-chair, Kushner.

After the rally, Kushner declined to say if she supported decriminalizing the possession and sale of cannabis in any amount. “I haven’t really studied the issue,” she said.

Kushner, a former union leader, said the governor’s bill must offer a greater degree of social equity than now proposed and should include the “labor peace” language in House Bill 6377 that encourages cannabis growers to accept unionization efforts. 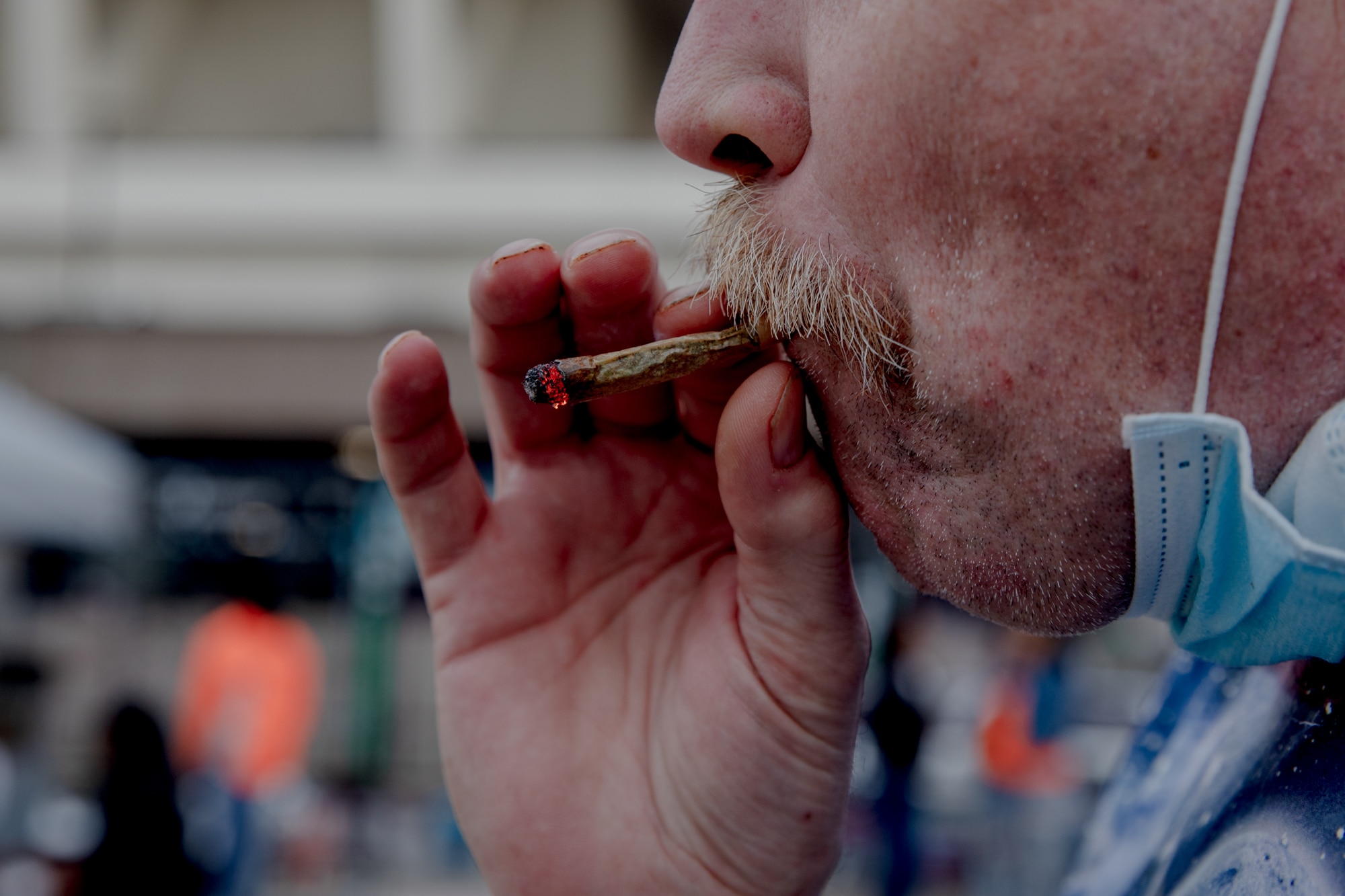 A Meriden resident, who declined to give his name, smoked a joint Tuesday.

Porter said the war on drugs, and particularly the penalties for marijuana, was directed at oppressing minority communities, and social equity is a means of redress — both in the economic opportunities created by a legal pot market and the tax revenues it would generate.

“In a nutshell, equity is economic justice. It is economic empowerment to the communities, to the people, to the families that have been harmed the most,” Porter said. “The detrimental damage, that’s where these revenues need to go. This is not about filling the budget gap. This is not about putting money in the general fund. This is about making whole the families and the communities that need us the most. It’s about giving them the resources and the opportunities.”

Kebra Smith-Bolden, one of the rally organizers, said equity is everything from erasing records of cannabis convictions to a reasonable opportunity to compete for licenses to grow and sell marijuana.

Paul Kirchberg, the director of Connecticut-NORML, said the right to grow cannabis should be central to any legalization bill. He said home-grown pot would not undermine a legal commercial market, even if it indeed grows like a weed.

“But if you want good quality smokeable cannabis, it takes skill, it takes time, it takes love, and it takes effort. It is not easy. But it also is not going to be a detriment to this state. We’re going to be having a ton of revenue,” Kirchberg said.

Variety, home-grown and store-bought, should be part of a legal market.