After Lamont pans tax hikes on the rich, key Democrats push back hard 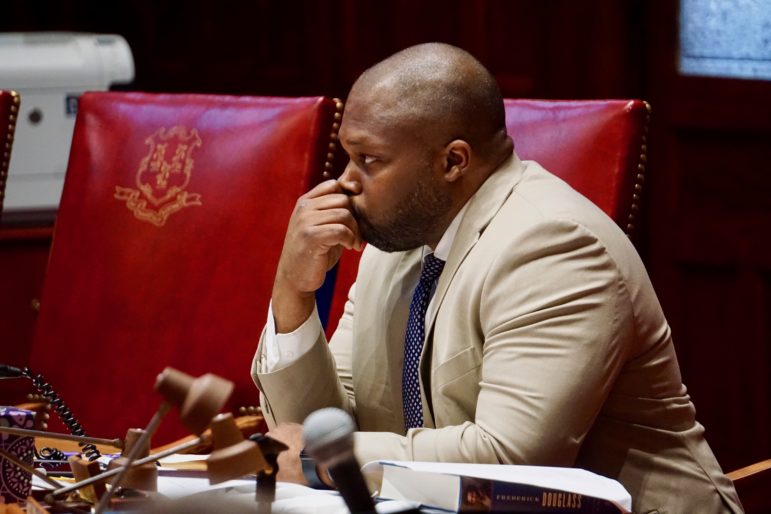 Sen. Gary Winfield, D-New Haven, is among those who are criticizing Gov. Ned Lamont’s reluctance to consider tax hikes on the rich.

Less than 24 hours after Gov. Ned Lamont warned he wouldn’t sign hundreds of millions in tax hikes aimed at the rich and big corporations, a labor coalition and key Democratic legislators pushed back hard.

Leaders of the General Assembly’s Black and Puerto Rican Caucus, the Senate chair of the Finance Committee and the Recovery for All Coalition warned the fiscally moderate Lamont to brace for rigorous budget debate.

And while Lamont was successful at killing one proposed income tax surcharge on the wealthy during his first year in office, the battery of proposals aimed at redistributing wealth this time around is far greater.

“The governor is a Democrat, and I think it’s time to back up that designation, that moniker, if you will, with substance,” said Sen. John Fonfara, a Hartford Democrat and finance committee co-chair, whose panel endorsed a significant state tax redistribution plan Thursday.

The package approved Thursday in committee includes two state income tax cuts for the poor and middle class and a one-time bailout for restaurants, collectively worth about $600 million over the next two fiscal years combined.

To fund that, and to help close a projected $2.6 billion gap in the next biennial budget, the panel also endorsed two income tax surcharges aimed at households earning more than $500,000 per year, as well as a new tax on digital media ads.

Lamont, a Greenwich businessman who insists that boosting state taxes on the wealthy would prompt them to flee Connecticut, quickly indicated his displeasure.

“No, it’s not something that I would sign,” the governor said at a press conference Thursday afternoon. “For the first time in many years, Connecticut’s got really good momentum, and that’s in terms of GDP [Gross Domestic Product] and employment and new businesses and people moving to the state of Connecticut. I think part of that is people have recognized we’re beginning to get our fiscal house in order.”

“Revenue is required in order to get to equity,” he said, adding that while the coronavirus pandemic exacerbated these problems, it didn’t create them. “This thing that we are calling a crisis is the norm.”

The Rev. Josh Pawlak, a minister at the Unitarian Universalist Society: East Church in Manchester and a member of the Recovery For All Coalition — a progressive group of labor and faith-based organizations — said Connecticut’s regressive state and municipal tax systems are the glue that holds this systemic racial injustice in place.

Citing a 2014 state tax incidence analysis, Pawlak noted that the 725,000 lowest-earning households in the state take home roughly as much as the top 356 income tax filers.

“No wonder so many Black and Latinx households and communities are just stuck, financially immobile and perpetually at risk,” he said. “It’s unfair, immoral and out of alignment with the American creed. Nothing is trickling down. There is no downward trickle. It is an upward tsunami.”

Progressive Democrats chastised the governor in February, arguing his budget proposal did too little to reverse systemic racism.

While a huge amount of federal pandemic relief has poured into the state, Lamont has been reluctant to tap state reserves to bolster healthcare, municipal aid or education.

The governor on Friday touted the more than $6 billion that the latest round of federal stimulus has given to state, municipal and regional government groups, as well as school districts, to use over the next two fiscal years.

“I think you’re seeing one of the greatest investments we can make in kids, in people, in child care this state has ever seen,” he said, adding that “it’s going to be transformative, particularly for the people who’ve been hit hard by COVID.”

But the states are prohibited from using the federal money to provide tax relief.

And the vice chairman of the Black and Puerto Rican Caucus, Rep. Bobby Gibson, D-Bloomfield, said students in poor urban centers will need more state investment “to overcome the challenges, isolation and trauma” of unequal access to education for the past 14 months.

Gemeem Davis, a member of the recovery coalition and co-director of Bridgeport Generation Now — a grassroots organization committed to increasing civic engagement in the state’s largest city — warned Lamont not to underestimate the growing frustration over his response to systemic inequality.

“If the governor thinks that the people are not going to take to the streets and demand that he listen and that he re-does his budget, re-does his thinking and start to acknowledge recovery for all and the needs and the services that we are demanding, he is sadly mistaken,” she said. “We are fired up. We are going to be in the streets, and we are going to fight for the services that we need.”

The Finance Committee’s proposals represent “the same illogical thinking that caused Connecticut to be near the bottom of the nation in recovery from the 2008-2009 recession,” said Connecticut Business and Industry Association President and CEO Chris DiPentima.

Lamont and legislators now begin negotiations on a final budget plan with a goal of adoption before the regular General Assembly session ends on June 9.

Winfield said it’s premature to commit to any budget vote now but warned he wouldn’t hesitate to withhold his support unless progress is made reversing inequality.

“If the budget doesn’t have enough of what I think we should be doing,” he added,  “then yes, absolutely, I would vote against it.”

Redistributing income through taxation does not bring prosperity

Lamont offers signing bonuses to get people off unemployment