Lamont: CT has made ‘an aggressive proposal’ to avert strike 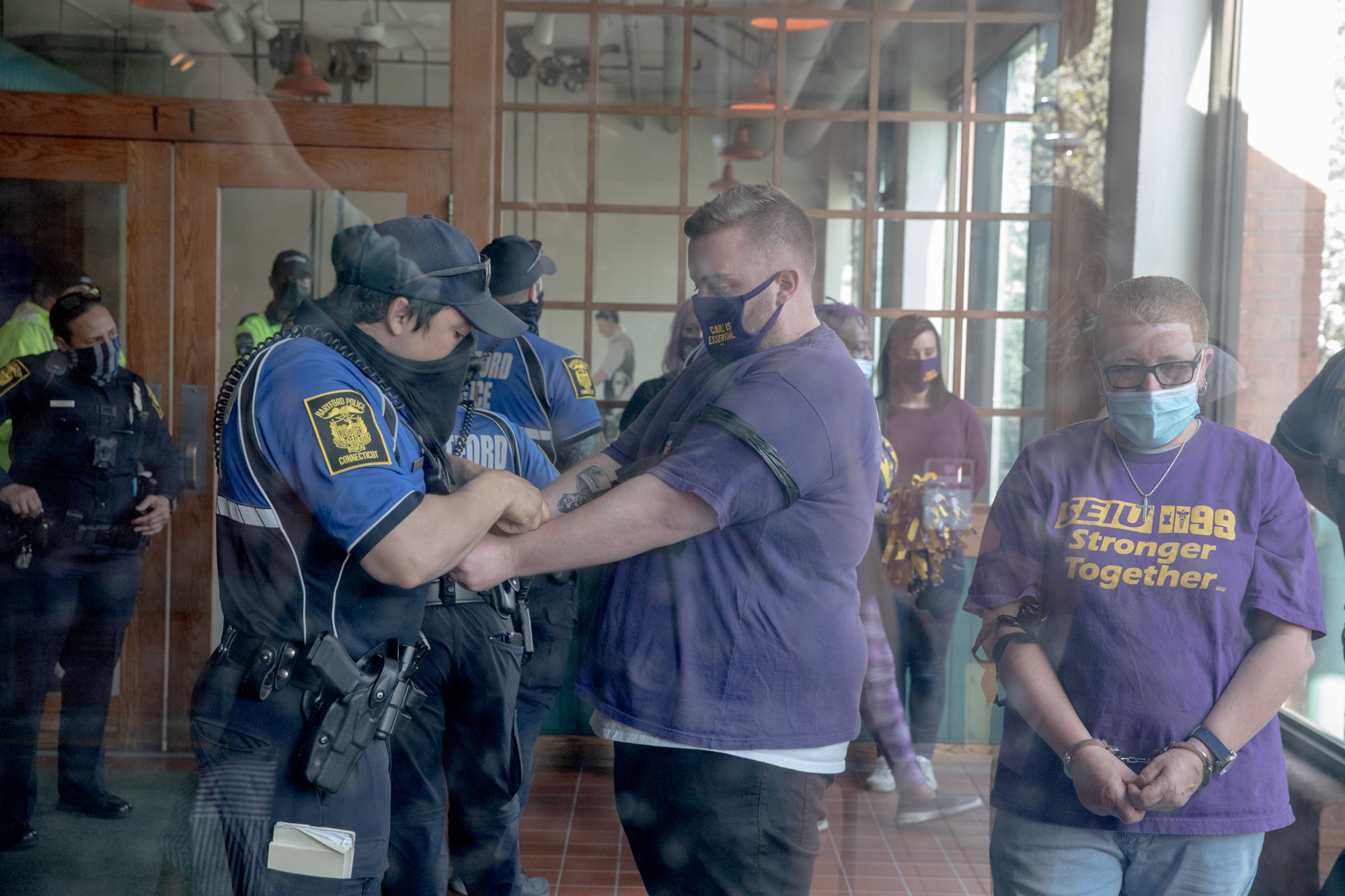 A protester with healthcare union SEIU 1199NE is handcuffed at a protest earlier this spring. Protestors planned to sit in the building lobby to ask for better treatment of nursing home, long-term care, home care, group home workers, including health insurance and better wages.

The state and its largest healthcare workers union continued their game of brinksmanship Monday as Connecticut inched closer to a major strike involving nursing and group homes.

Also Monday, the union and Yale University unveiled a new study that concluded state health officials were lax in their regulation of nursing homes during the first year of the coronavirus pandemic.

“I ask this governor one more time to please put money into his budget to fund the nursing homes, that we could get the better wages, that we could get more staffing,” said union member Tanya Beckford, a certified nursing assistant with Newington Rapid Recovery Rehab Center.

Lamont, who did not include any additional state dollars for nursing homes in the budget he proposed in February, did recommend using $20 million in new federal pandemic relief next fiscal year to help nursing homes. But both industry and union officials say that’s far short of what’s needed to avert a work stoppage and cover the financial losses homes have suffered.

“This strike is going to be on him, on his conscience, because we don’t want to do it,” Beckford said. “But he’s given us no choice.”

The new proposal the governor outlined Monday does tap state dollars, but it remains unclear whether that will solve the crisis.

That would bring the total potential work stoppage among nursing homes to 39 facilities and 4,000 workers. The six homes are: St. Camilius Center in Stamford; West Hartford Health & Rehabilitation Center; Advanced Center for Nursing and Rehabilitation in New Haven; Governor’s House Rehabilitation & Nursing Center in Simsbury; and Cassena Care facilities in Norwalk and Stamford.

The union last week also warned the private, nonprofit agencies that run group homes for the state that more than 2,000 workers who serve the developmentally disabled and people suffering from mental illness or drug addiction plan to strike on May 21.

The union says 24 of its members — employed at nursing homes, group homes or in other situations — have died and hundreds of others contracted COVID-19, often because they were denied sufficient protective gear or were overworked due to inadequate staffing.

To cement its case, the union and Yale University’s Worker and Immigrant Rights Advocacy Clinic released a study Monday titled “We Were Abandoned.”

The analysis, which Yale faculty and students conducted pro bono, concluded that compensation, staffing, safety and regulation issues “will continue to create perilous conditions for both workers and residents unless the state takes action.”

The report concluded that state Department of Public Health regulators found that homes:

But at the same time, the report says, the Lamont administration “made little use of its primary enforcement tools” — namely, inspections and fines.

An analysis of all oversight documents “the DPH has made available” shows citations were issued for 34 incidents related to COVID-19 from March 2020 through this past February, resulting in a total of $98,081 in nursing home fines, Yale researchers wrote.

Department of Public Health spokesman David Dearborn said the agency would review the analysis in detail, but he cited another study by Mathematic Policy Research that concluded the state made its decisions based on the available knowledge from government epidemiologists and other public health experts.

“As Gov. Lamont said when the Mathematica report was issued, ‘Connecticut made some very critical decisions in our response to COVID-19 that saved lives and improved public health,’” Dearborn said.

The health department spokesman added that “DPH has worked in support of nursing home residents and staff and has also held owners accountable when necessary,” conducting more than 3,000 inspection control surveys. That state work included collecting and distributing a massive stockpile of protective gear to safeguard healthcare workers during the pandemic, he said.

Matthew Barrett, president and CEO of the Connecticut Association of Health Care Facilities, which represents more than 140 nursing homes, said Monday that he had not seen the report and would review it before commenting.

Lamont: CT has made ‘an aggressive proposal’ to avert strike 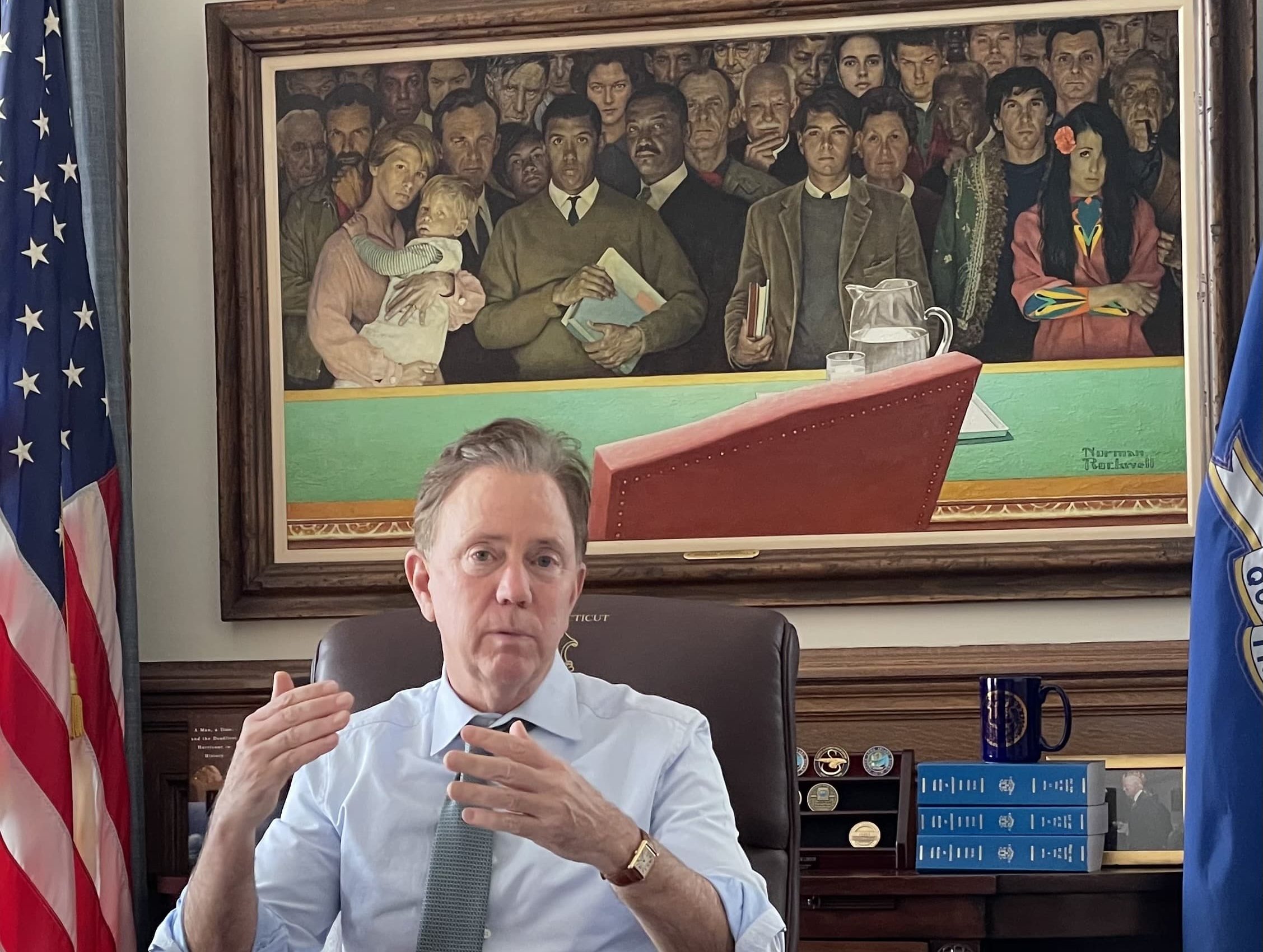 To try to keep workers on the job, the administration has proposed spending about $280 million over the next two fiscal years that would allow homes to boost worker pay by 4.5% per year.

It does so by building on a proposal from the legislature’s Appropriations Committee.

Unsatisfied with Lamont’s plan in February to offer no increase to nursing homes, the appropriations panel recommended in April giving facilities an additional $22.2 million in the fiscal year that begins July 1, and $48.6 million in 2022-23.

Lamont now says he not only would accept that but more than double it, giving facilities $150 million over the next two fiscal years combined. Facilities would have to use most of these dollars to pay for the raises. They also would get about $20 million that would have to be spent to enhance workers’ retirement benefits.

The package also includes $12.5 million to fund hazardous pay bonuses for workers and $13.5 million for enhanced training and staff development.

But the nursing home industry is in tough financial straits as well, and to give facilities an immediate financial boost, the governor also proposed granting facilities a temporary, nine-month-long increase Medicaid rates of 10%. This would be worth about $86 million, bringing the total to about $280 million.

“We’ve got an aggressive proposal on the table, because there’s nothing more important than taking care of our seniors,” the governor said. “It’s the right thing to do.”

Lamont’s proposal, though, falls far short of what the other parties in this conflict are seeking.

Barrett has said the nursing home industry needs an extra $312 million annually to offset the revenue losses and rising costs that have developed since the pandemic began — a figure that doesn’t include any additional funds for enhanced pay or benefits for workers.

Also, the union has said it wants to raise all workers’ pay to $20 per hour, adding that most nursing home caregivers currently earn hourly between $13 per, which is the state minimum wage, and $15. An increase from $15 to $20 per hour is a pay hike of 33%. Raising all pay to $20 per hour and bolstering staffing levels likely would cost more than $200 million extra per year, the union says.

But while all sides in the negotiations have said compromise may be necessary, Lamont’s offer may not be the final word on what the state has to offer.

Osten, whose panel must submit a plan later this month on how to use more than $2.6 billion in new federal pandemic relief going directly to the state, said it will include roughly another $75 million for nursing homes — $40 million in the first year and $35 million in the second.

The committee already has endorsed an extra $50 million this fiscal year, and $30 million in each of the next two, for nonprofit social service agencies.

Osten added all sides continue to talk and hope to avert a strike.

Tensions escalated on Sunday, though, when the mutual aid program to which all Connecticut nursing homes belong asked all facilities to provide an emergency update on available beds.

Sources close to the process said the Genesis nursing home chain had been struggling to secure temporary staffing to cover residents in the event of a strike.

But Genesis spokeswoman Lori Mayer said Monday that the company has guaranteed temporary staffing support, and Dearborn confirmed on behalf of the state health department that “the current outlook for temporary replacement staffing, should the strike go forward, has improved.”

Barrett added that strikes are costly for the industry and that “it would be far wiser” to use state and federal resources to bolster funds for nursing home care, including to cover the issues raised by the union.