Lamont, lawmakers debate what reform might still pass this session 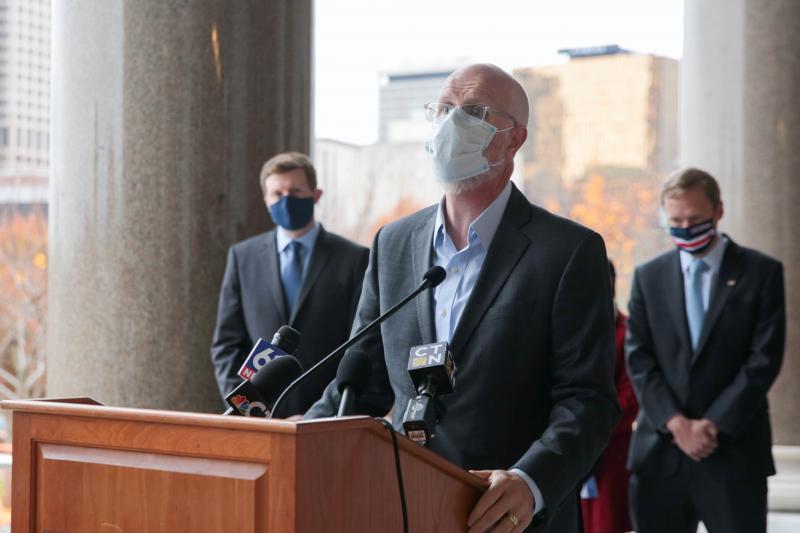 State Comptroller Kevin Lembo speaks about his support for a public option health insurance program at a November news conference.

Proponents of a measure that would create a public option insurance plan for small businesses and nonprofits said Friday that the proposal will be shelved for a third consecutive year because Gov. Ned Lamont threatened not to sign the bill if it passed the General Assembly.

A watered-down version of the public option bill cleared the House in 2019 but did not come up for a vote in the Senate. And a similar proposal raised last year was suspended after the state Capitol shut down at the start of the COVID-19 pandemic.

‘Public option’ health insurance in CT is a key priority for Democrats in 2021 Health care reform bills face uncertain future as end of session nears How does the public option bill differ from Gov. Ned Lamont’s health care plan? Here’s a look at the two proposals.
“I am disappointed that Governor Lamont has denied affordable health care options to small businesses and nonprofits, despite the obvious need and overwhelming support from the public,” state Comptroller Kevin Lembo, a key backer of the measure, said in a statement Friday. “This is a missed opportunity that will have real life consequences for the small employers in our state that have been pleading for help after taking a massive economic hit from the pandemic. To cast them aside is both a terrible message to send and a severe economic miscalculation.”

News of the bill’s demise was first reported by the Hartford Courant Friday.

Sen. Matthew Lesser, a Middletown Democrat who is co-chairman of the Insurance Committee, said Lamont expressed opposition to the measure.

“My hope is that the governor understands and everyone understands that we’re in the middle of a health care crisis, and it will be a dereliction of duty for us to adjourn without addressing the affordability of health insurance.”

Senate President Pro Tem Martin Looney said the public option bill had “substantial” support in his chamber, but that it could not move forward without the backing of Lamont and the House.

“We knew the governor was not disposed toward the bill,” he said. “We need partners if we’re going to do this. We need the House and we need the governor.”

Max Reiss, a spokesman for Lamont, did not address remarks about the governor’s opposition to the bill, saying only: “The governor and legislature agree health care is a human right that too many Connecticut families struggle to afford.”

“The governor is confident we can work across branches and across the aisle to lower the cost of prescription drugs, take full advantage of transformative federal investments, and make coverage more affordable and attainable for as many as residents as possible,” he said.

Lesser and Lembo said talks are ongoing about what type of health reform the legislature might take up before it adjourns on June 9. The public option bill also included an assessment on insurance carriers that would bring in up to $50 million per year to help fund additional subsidies on Connecticut’s insurance exchange, Access Health CT. But substantial federal money that the state will receive from President Joe Biden’s American Rescue Plan – that already is being used to boost subsidies on the exchange – has led some to question whether the assessment is needed.

The bill also included an expansion of the state’s Medicaid program for children and parents from low-income households and pregnant women. But that proposal has since been incorporated into the budget that is under negotiation in the General Assembly.

In April, the legislature’s Appropriations Committee approved a $46 billion, two-year state budget that features $34 million over the biennium to expand income eligibility for Medicaid, known as HUSKY A in Connecticut. The qualifying limit would rise from 160% to 175% of the federal poverty level.

Lawmakers and Lembo did not say what aspects of the public option bill they hoped to preserve as negotiations continue, but the state-sponsored plan for small businesses and nonprofits will not move forward.

“The American rescue plan is going to make a big difference for a lot of folks in the middle class,” Lesser said. “But I think there is still more work to be done for small businesses, there’s more work to be done for lower-income folks, and immigrants are still prevented from even purchasing insurance with their own money as a result of the Affordable Care Act. Those are all issues we can and should address.”

The CT Mirror reported earlier this month that both the public option bill and a measure proposed by Lamont that would cap annual increases in the cost of prescription drugs had lost momentum and run into trouble with only weeks left in the session. Pfizer raised significant opposition to Lamont’s proposal and the heads of five major insurance companies issued a statement criticizing the public option bill.

Frances Padilla, president of the Universal Health Care Foundation of Connecticut, chided the governor and legislators for not sticking with the measure.

“Residents need relief from relentless health care bills. … The governor points to the American Rescue Plan as a solution, but he knows just as well as we do that this is only a temporary and inadequate fix to persistent and systemic problems,” she said.

“The American Rescue Plan will not help small businesses ​or nonprofits the way a robust public option would. By offering them new choices for affordable, dependable coverage, their employees would benefit from the size and negotiating power of the state employee health plan. Instead, the governor has the backs of insurance CEOs and lobbyists, rather than the backs of small businesses.”