The Connecticut watchdog agency tasked with enforcing the state’s anti-discrimination laws on Monday will lay out the role segregation is playing to disproportionately kill Black and Latino residents during the pandemic.

CT legislators underwhelmed with housing reform bill that passes House The pandemic’s effect on the housing market helped some — but others are left behind. Does ‘snob zoning’ lead to segregated suburbs in CT?

“Connecticut is one of the most racially segregated states in the nation,” is how the Commission on Human Rights and Opportunities begins its 51-page report. “Segregation born of zoning policies has had a particularly deadly effect during the COVID-19 pandemic. … The effects of segregation cannot only be measured in municipal demographics or statistics of income inequality, but in lives lost.”

The impact of segregation was especially troublesome during the pandemic, the authors write, because the same minorities who live in segregated areas and work in jobs, such as grocery stores and nursing homes, they couldn’t perform from home were disproportionately impacted by COVID itself. Black residents in Connecticut have a death rate from COVID-19 that is more than twice that of white residents, while the death rate for Hispanics is nearly 2 times that of whites, according to state data.

Since the pandemic began, an influx of people have filed housing discrimination complaints with the watchdog agency. Most of that 24% increase — from 307 complaints in 2019 to 381 in 2020 — were people who were denied housing because they planned to pay with a Section 8 voucher.

“The pandemic has only made more obvious the devastating consequences of leaving such disparities unaddressed,” they write. “When communities are divested of resources and restrictive zoning perpetuates segregation and poverty in those communities, it follows that a disproportionate number of residents from those communities hold jobs that have been deemed ‘essential’ in the pandemic.”

While the report took months of research, the timing of its release is strategic. The state House of Representatives last week passed zoning-reform legislation that stripped out or scaled back many of the controversial sections that would have made it easier for more affordable housing to open in Connecticut’s suburbs. House Majority Leader Jason Rojas, D-East Hartford, called the bill a “painfully incremental approach.”

“The bill that was passed by the House, unfortunately, a lot of the language has been watered down, and most of the provisions seem to now allow opt outs. History has shown us that leaving addressing racial segregation to voluntary choices of towns has not cut it — and it’s not going to cut it,” said Jody Walker-Smith, one of the authors of the report and a human rights attorney at CHRO. 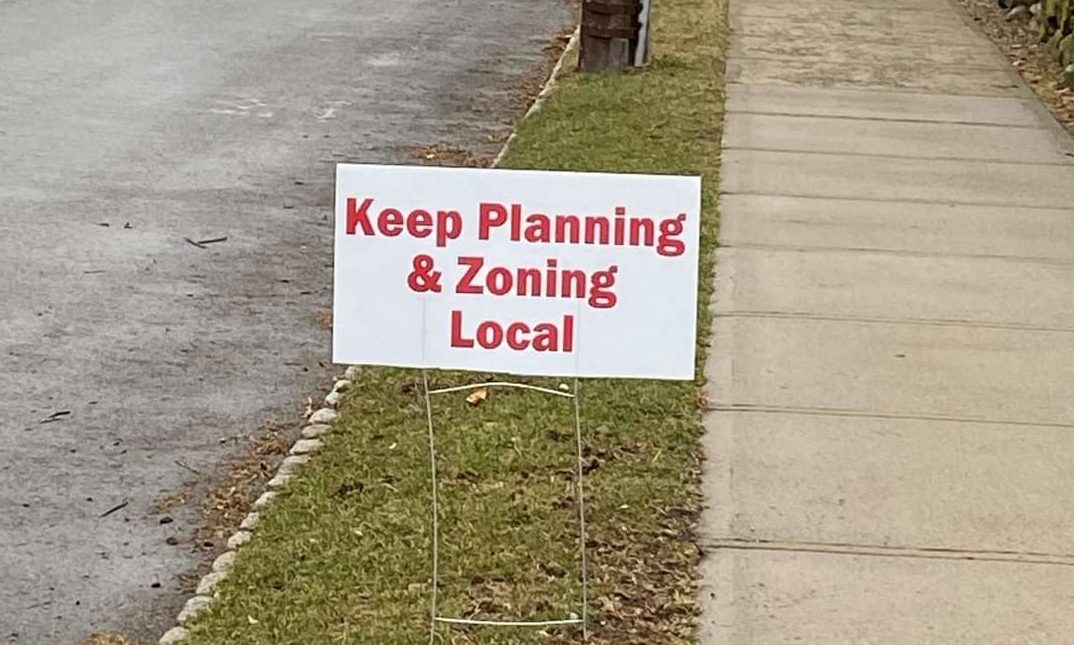 Lawn signs created by members of the CT Residents for Local Zoning coalition, which has been very vocal against the zoning reforms that were being considered by the General Assembly.

The last time the CHRO did a deep dive into the impact of zoning policies was in 1978.

The reports — despite being 43 years apart — take a similar tone.

“By failing to counter the aggregate tendency of local zoning to exclude multiple-family housing, small houses on small lots and mobile homes, the State quietly tolerates forces making the achievement of equal opportunity for protected classes of the Connecticut population increasingly difficult to achieve,” the 1978 report concludes.

“These artificial and discriminatory barriers to fair housing use tools like restrictions on dwelling types, lot size requirements, floor size requirements, parking mandates, and more to prevent affordable housing from being built or operated. … Municipalities drafted these wealth-based ordinances in an effort to control the make-up of their neighborhoods.”

While state efforts and reforms that have allowed more affordable housing have somewhat helped, CHRO concludes that legislatures and governors over the years have not meaningfully addressed the root cause of the segregation: zoning.

One effort has been allowing developers to spend years in court trying to bypass local zoning rules to build anything but a single-family home in recalcitrant towns.

“In practice this is not a particularly effective method of driving inclusive communities. A major problem is that this mechanism relies on developers engaging in costly litigation in order to override the municipal planning commission’s rejection. Few developers opt to engage in that expense,” the CHRO said, adding that since 2010 only 69 cases have been filed using that route. “The infrequent use of this process is troubling.”

The state is paying for this stagnation financially since segregation remains a problem in schools. Connecticut has been under a school desegregation order for 25 years and the state’s school-funding setup struggles to bolster spending enough in impoverished, segregated communities to catch up with their nearby affluent communities.

The state, the CHRO finds, “falls short in meaningfully addressing the root cause of educational segregation — residential segregation itself.”

It is unclear what impact this report will have at the state Capitol. There are 16 days left before the legislature is constitutionally required to adjourn its regular session. The fate of the scaled-back zoning reform bill awaits action in the state senate, and several other controversial bills that aim to tackle segregation also await action in both chambers.

Housing advocates worry the passage of the watered-down bill in the house, however, is a sign that the legislature doesn’t have the appetite to pass bold reform anytime soon.

“This bill actually may set us back, because there is a good chance it will be taken as the legislature’s answer to exclusionary zoning for years to come. It’s not an answer, it’s an abdication,” said Erin Boggs, the executive director of the Open Communities Alliance, whose civil rights attorneys advocate and litigate for fair housing.

Sara Bronin, the founder of DesegregateCT and law professor at UConn Law, said that the watchdog’s report provides further proof that   bold zoning reform is needed.

“The CHRO report confirms that exclusionary zoning continues to cause inequality, segregation, and disparate health hand education outcomes for far too many,” said Bronin. “While [the bill passed by the House] is not nearly substantial enough, our coalition urges its quick passage in the Senate as a meaningful first step.”