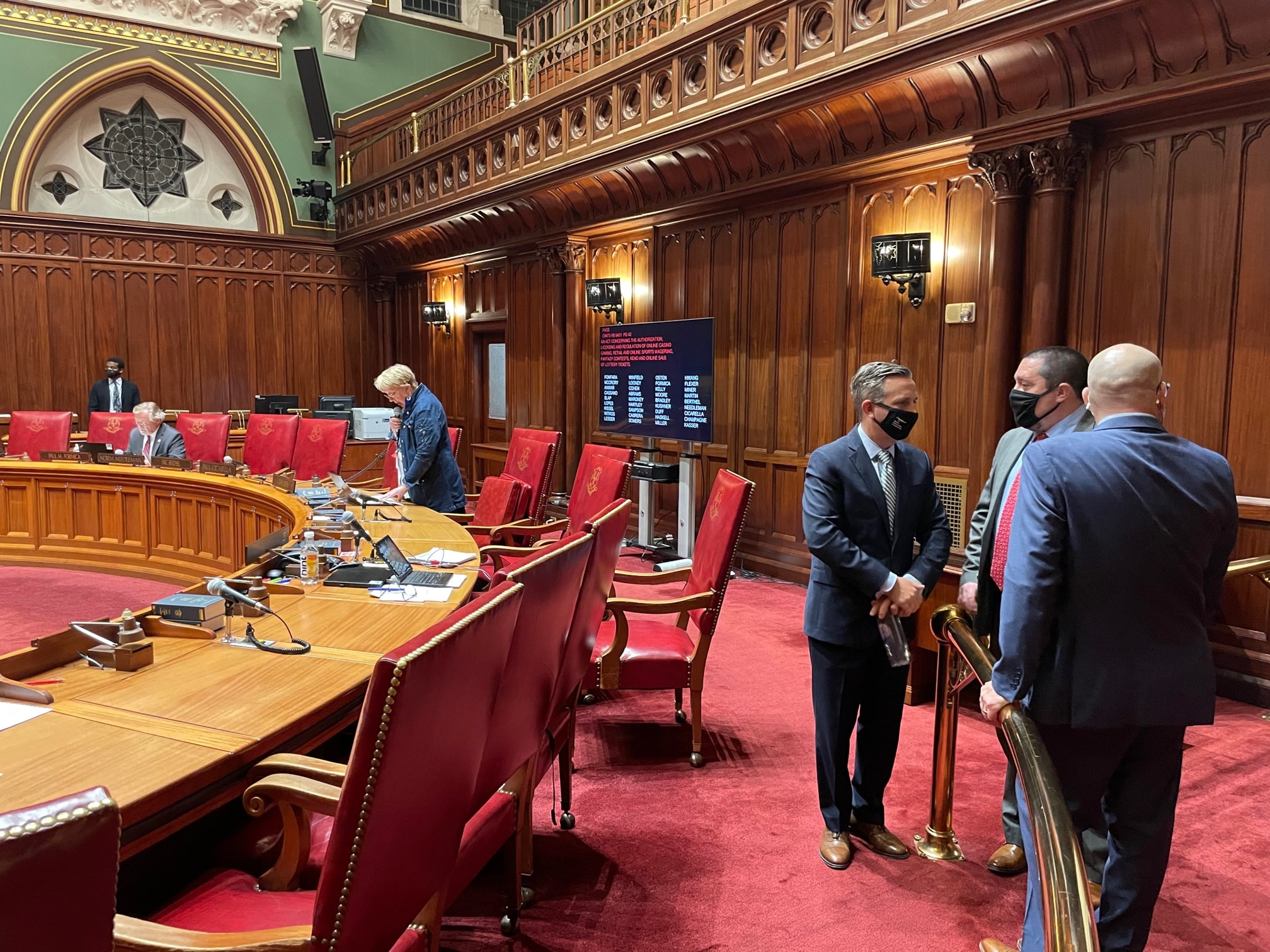 A bill legalizing sports betting and online casino games and lottery sales in Connecticut won final passage late Tuesday night on a 28-6 vote in the Senate, an effort to boost state revenues and help casino employment rebound in the state’s struggling southeastern corner.

Passage came after a relatively brief debate, an anticlimactic ending to a multi-year push to expand the customer base of Foxwoods Resort and Mohegan Sun, two tribal casinos squeezed by competition in New York, Rhode Island and Massachusetts and a temporary closure forced by COVID-19.

“This has been a long and strange trip to get to this point,” said Senate Majority Leader Bob Duff, D-Norwalk.

Gov. Ned Lamont has promised to sign the bill and immediately seek federal approval of necessary amendments to the state’s gambling compacts with its two federally recognized tribes and casino owners, the Mashantucket Pequot and Mohegan tribal nations.

His administration broke a deadlock with the tribes, who have exclusive rights to casino gambling, and negotiated a framework for the first significant expansion of gambling since the casinos opened in the 1990s. For better or worse, the legalization will be  central to Lamont’s legacy and, most likely, a re-election campaign next year.

“This is about so much more than gaming and gambling,” said Sen. Cathy Osten, D-Sprague, whose district is home to both casinos, which have a combined payroll of about 12,000.

“This really is an important economic development bill. That’s what it is,” said Senate President Pro Tem Martin M. Looney, D-New Haven. “This is worth celebrating to finally reach this point.”

Connecticut would be the third New England state after Rhode Island and New Hampshire to legalize sports betting since the U.S. Supreme Court removed federal restrictions in 2018. New York and New Jersey also have sports books.

CT Lottery and both casinos would share the rights to sports betting online. It also would be available at the casinos and up to 15 sports bars or other facilities licensed by the lottery.

The bill puts Connecticut among a half-dozen states with online casino gambling, effectively giving any adult physically in the state the means to gamble 24/7 on a smartphone, tablet or computer.

The state will collect taxes of 18% initially on online casino gambling, increasing to 20% after five years; and 13.75% on sports betting and fantasy sports. It is projected to generate $28 million in the fiscal year beginning July 1 and increase in subsequent years.

The opposition came from lawmakers concerned about problem gambling, plus those angry that the bill suspends for 10 years the authorization granted in 2017 for the tribes to jointly build a casino off I-91 in East Windsor to compete with MGM Springfield. The tribes had already shelved the project indefinitely.

“We know there are going to be addiction issues,” said Sen. Tony Hwang, R-Fairfield, who argued that the state was inviting a significant increase in problem gambling. “I hope I’m wrong.”

The bill bans betting on collegiate sports in Connecticut, but Sen. Kevin Witkos, R-Canton, said the restrictions on referees, coaches and other participants in sports from wagering were insufficient.

“I certainly don’t want a Pete Rose moment here in Connecticut,” Witkos said. But he said he would nonetheless vote for the bill, hoping to add further restrictions in subsequent legislation.

The bill assesses levies on the tribes and lottery for contributions to problem gambling services.

Each of the casino owners will be required to contribute $500,000 annually, and the lottery will increase its contribution by $1 million, to $3.3 million.

The bill also outlines a framework for safeguards, such as periodic reminders of how long a gambler has been online, limits on credit and the ability to self-exclude. The Department of Consumer Protection will retain its current jurisdiction over gambling.

“I’m heartened” by the safeguards, said Sen. Mae Flexer, D-Windham. “I wish there was more.”

Flexer called the vote “one of the toughest,” but the economic impact of the casinos and the need to support their potential growth outweighed her fears about problem gambling.

Sen. John Kissel, R-Enfield, said he was skeptical about the adequacy of the safeguards or Connecticut’s understanding of what lies ahead as gambling goes online.

“I think the dangers are rife here,” said Kissel, who voted no. “We need to take careful analysis of the states that have gone down this road.”

Missing the vote were Sen. Matt Lesser, D-Middletown, who was at the Capitol earlier Tuesday evening, and Sen. Dennis Bradley, D-Bridgeport, who was arrested Tuesday morning on federal charges.