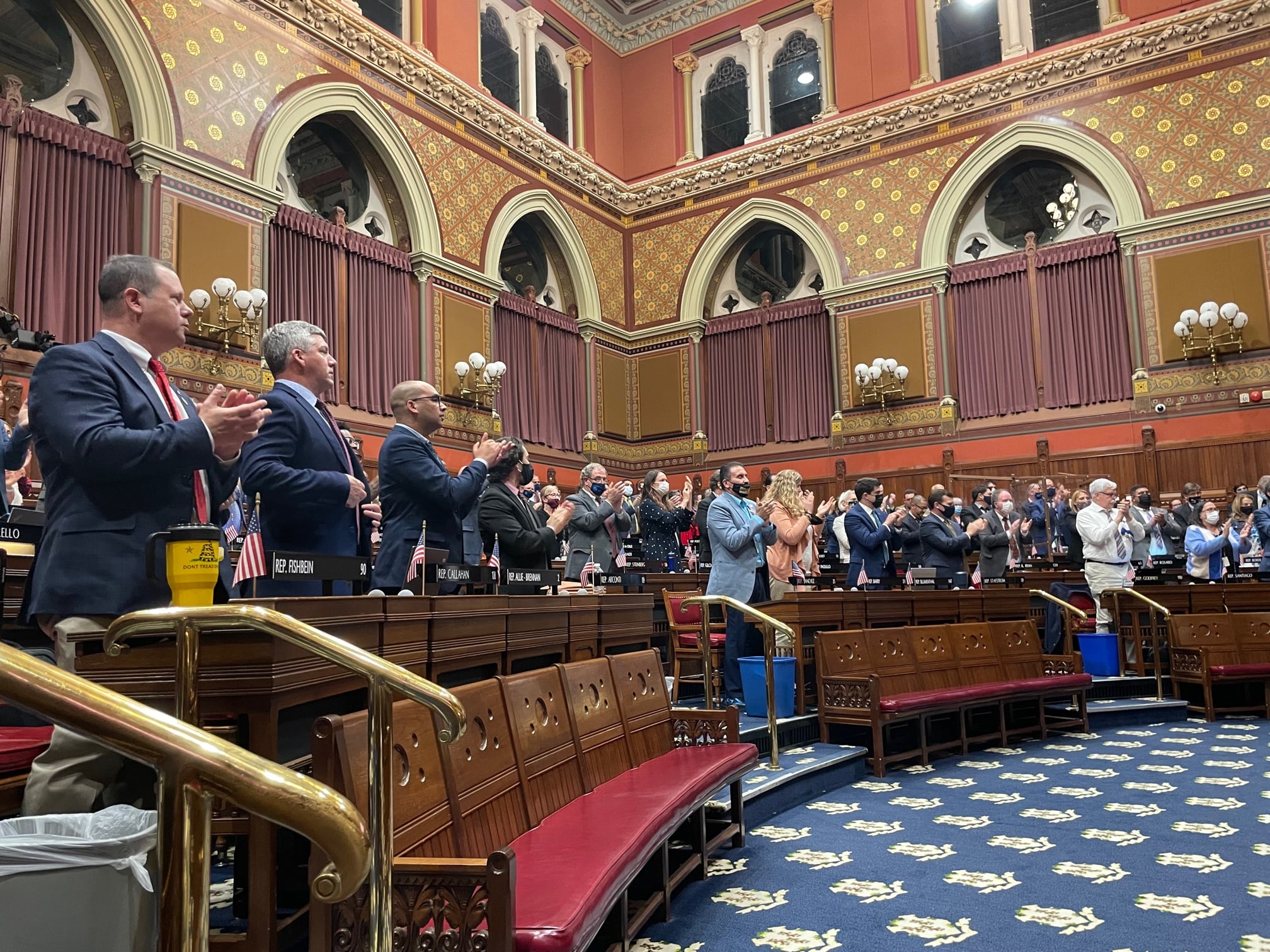 The House gave itself a round of applause on the last night of the regulation session. A special session begins Tuesday in the Senate with a limited agenda: marijuana legalization and a budget implementation bill.

Environmentalists and behavioral health providers lobbied lawmakers Monday on the eve of a special session to revive the stalled Transportation Climate Initiative and increase long-stagnant reimbursements for mental health and drug-addiction services.

Despite the support of Gov. Ned Lamont and significant numbers of the General Assembly, House and Senate Democratic leaders said that the enabling legislation for the environmental policy known as TCI will not not be on the special-session agenda.

Non-profit behavioral health providers will not see the overdue rate increases they had been led to expect this year, but they will see a temporary boost in funds from federal aid, legislators said. The health providers say the failure to fund adequately is chronic.

The Senate is to convene at 11 a.m. Tuesday for action on two bills: a measure legalizing the recreational sale of marijuana, and another that has provisions necessary to implement the budget. The House will take up the two bills on Wednesday.

The annual budget implementer bill is a catch-all, a vehicle for lawmakers to make final adjustments to the state’s spending plan or add language reviving measures that failed before the lawmakers reached the constitutional adjournment deadline of midnight June 9.

Major elements of Senate Bill 5, a voting-rights measure that cleared the Senate and died from inaction on the House calendar, will be incorporated into the implementer, which was the subject of continuing negotiations as evening approached Monday.

Under legislative rules, the bill must be filed 12 hours in advance of the Tuesday session.

Senate Majority Leader Bob Duff, D-Norwalk, said the marijuana bill would not substantively change from the version that the Senate passed 19-17 shortly before 2 a.m. last Tuesday, the second to last day of the regular session. It did not come to a vote in the House.

House Speaker Matt Ritter, D-Hartford, said there are sufficient votes to pass the marijuana legalization bill. But as was the case in the Senate, where one-quarter of the Democratic caucus voted no, a significant minority of House Democrats remains opposed.

One possible change was a “revolving-door” provision barring government officials involved in overseeing the legislation or regulation of marijuana from going to work for the industry without a cooling-off period.

Ritter, Senate President Pro Tem Martin M. Looney, D-New Haven, and the Lamont administration all said Monday that the Transportation Climate Initiative will not be on the agenda, despite the governor’s wishes and the claims of some advocates and lawmakers that they had the votes for passage.

“Neither the Senate or the House are showing any kind of leadership on climate. They don’t speak about air pollution, don’t speak about climate,” said Thomas Regan-Lefebvre, coordinator of Transport Hartford Academy.

“All of the parties who could make this happen have expressed an interest in getting this done,” said Charles Rothenberg, an attorney with Save the Sound. “But they couldn’t get it done. It’s a wildly frustrating failure of politics.”

TCI was conceived as a multi-state climate change-combatting concept for motor vehicles, and Lamont has committed to the effort. But he was seeking passage of enabling legislation needed to develop a state-specific program from the broad TCI parameters.

Opponents have warned it will lead to higher gas prices.

Looney said there is broad support for the goals of TCI, but he did not see the votes for passage of the enabling legislation.

The Lamont administration insists that TCI remains its policy, and Deputy Commissioner Garrett Eucalitto of the state Department of Transportation assured a regional web conference last week that the failure to pass the enabling legislation is not fatal.

“My discussions with both legislative leaders and the governor’s office have not given me any indication that we should consider this a dead deal. All recognize the importance of reducing greenhouse gas emissions,” Cohen said.

Using unusually sharp language, the behavioral health providers told reporters in a video press conference that promised funding was taken from them and used to avoid a strike by workers at group homes for the intellectually disabled.

“We have a crisis, and we thought we were close to a solution. But instead of passing a budget that increased funding for all nonprofits, as the Appropriations Committee had recommended, funding was directed instead to the providers who needed to settle strike actions,” said Heather Gates, chief executive of Community Health Resources. “Those organizations clearly deserve raises, no question about that. But so, too, do our staff. And so, too, do our clients deserve to receive treatment in a timely way.”

Gates said her organization currently has 33 openings for clinicians, delaying treatment, and this year’s disappointment comes after a decade of insufficient funding.

The Department of Mental Health and Addiction Services cut grant funding by 27% for substance abuse and 20% for mental health since the 2012 fiscal year, weakening the ability to respond to higher demands for services during the COVID-19 pandemic, she said.

“That’s what was leading into this pandemic. These cuts also took place during another pandemic —the opiate crisis,” Gates said. “Death rates in Connecticut climbed during this period of time and remain high.”

“For the first time, Connecticut actually has the resources and had everyone aligned to do this, and at the last moment, our support was pulled away,” Steck said.

Ritter and Looney said the federal pandemic relief funds will allow to the state to make up some of the funds redirected to avoid a strike.

“That’s our intent,” Looney said. “We’re not quite sure what the numbers are.”