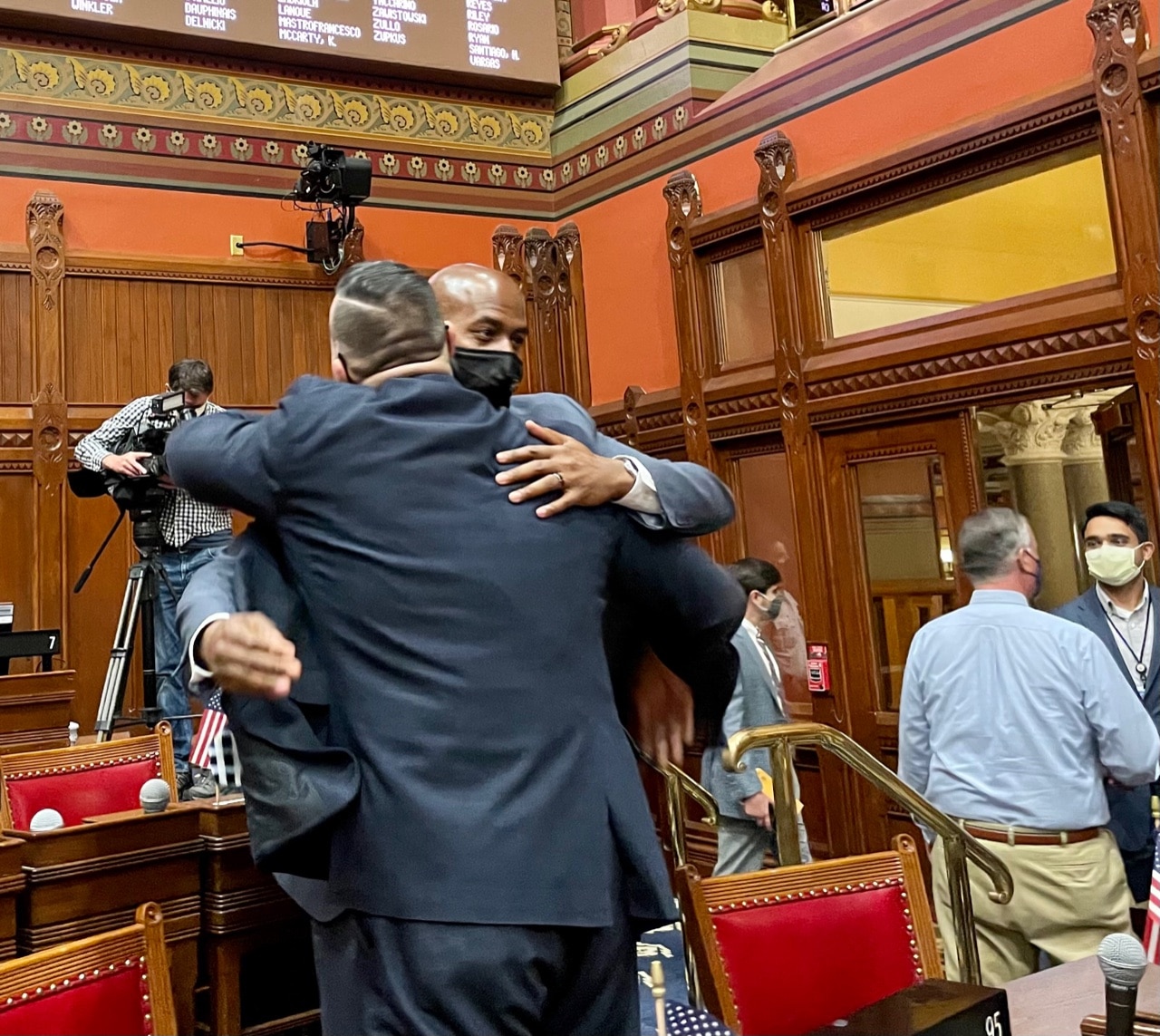 Reps. Juan Candelaria of New Haven, left, and Joshua Hall of Hartford embrace after passage of a bill both supported.

The House of Representatives voted 76-62 in special session Wednesday for legislation that would create a legal market for recreational marijuana in Connecticut, overcoming a threatened veto over an 11th-hour effort to rewrite the rules for awarding valuable licenses for cultivation and sales.

By deleting language that would have given licensing preference to anyone ever arrested for a marijuana offense, the House sided with Gov. Ned Lamont and effectively rebuked a few colleagues intent on reneging on a deal struck last week.

“When the governor said he’s going to veto it, I think that was the end of the conversation for a lot of people, which is, ‘We had a deal last week. Let’s honor that,’” said House Speaker Matt Ritter, D-Hartford.

The amended bill now returns for final passage to the Senate, which has twice voted for legalization over eight drama-filled days. The Senate intends to vote Thursday.

Republicans voted nearly as a bloc against the bill, though several said they favored the legalization of marijuana — not its commercialization. Rep. Dave Rutigliano, R-Trumbull, said he could support a limited bill allowing the possession and cultivation for personal use.

The only Republican yes vote was cast by Rep. Rick Hayes of Putnam. Twelve Democrats voted no.

The bill would allow the purchase and possession of marijuana at age 21. Possession of 1.5 ounces, plus another 5 ounces in the home or a locked vehicle, would be legal effective July 1.

The bill passed Wednesday envisions marijuana as a major industry in Connecticut, which already has four commercial growers of cannabis for medical use. Commercial production licenses for the recreational market would cost as much as $3 million, while the fee for a micro-cultivator would be $1,000.

Commercial growers and retailers would be intent on increasing the market, promoting the use of a drug that increasingly has crept into the mainstream, often favorably compared to alcohol, lawmakers warned.

Rep. William Petit, R-Plainville, a physician, said the debate was too focused on equity issues, glossing over public health consequences. In the Senate, one of the Democrats opposed to the bill also is a physician, Saud Anwar of South Windsor. Twenty-five percent of cannabis tax revenues would go to abuse prevention and recovery funding, beginning in the 2024 fiscal year.

The regular annual session ended last week without the House voting on a bill passed by the Senate on the second-to-last day, prompting the special session.

Winfield unexpectedly amended the bill in the Senate on Tuesday, inserting language sought by Rep. Robyn Porter, D-New Haven, among others, to benefit license applicants who had a criminal record for marijuana — including a prominent advocate, Jason Ortiz.

Half of all licenses will be reserved for social-equity applicants.

Lamont’s staff notified the Senate that Winfield’s amendment reneged on the deal and undermined the bill’s provisions on social equity, which were intended to benefit applicants from poor and urban neighborhoods disproportionately impacted by the war on drugs.

Using a marijuana arrest as the basis for a social equity application — without a connection to an impacted census tract — would have given a preference to a wealthy investor who either had a minor brush with the law or had a child who did.

Ritter said a criminal record for marijuana should be no bar to anyone seeking a license. “But do I think that you should get a leg up because you got pinched for marijuana at 19 at Wesleyan?” Ritter said. “No, I don’t.”

Ortiz, the founder of the Minority Business Cannabis Association, had a marijuana arrest as a student at Norwich Free Academy. He said he is an aggressive advocate for himself and others harmed by the war on drugs who now want to get into the business.

On social media and in meetings, Ortiz repeatedly has challenged the knowledge and, at times, motives of those who disagree with him on cannabis policy. He acknowledges pushing the envelope.

“When it comes to posturing, it’s my job to advocate,” Ortiz said.

Ortiz said he understands that allowing anyone with a marijuana arrest to get a social-equity license could benefit a wealthy investor, but he questioned whether that would happen.

As for himself, he said he now lives in Hartford and may be eligible to make a social equity application, though he was unsure what census tracts would be judged as disproportionately impacted.

Ortiz said he supported passage of the bill, with or without the language he favored on arrests.

“I don’t think we’ll get a better bill in two years,” Ortiz said. “We shouldn’t kill the bill by any means. I just know my community expected me to fight for them until the last minute.”

The fight resulting from Winfield’s amendment was intramural. It divided supporters of legal marijuana, especially in the legislature’s Black and Puerto Rican Caucus, on the threshold of victory. 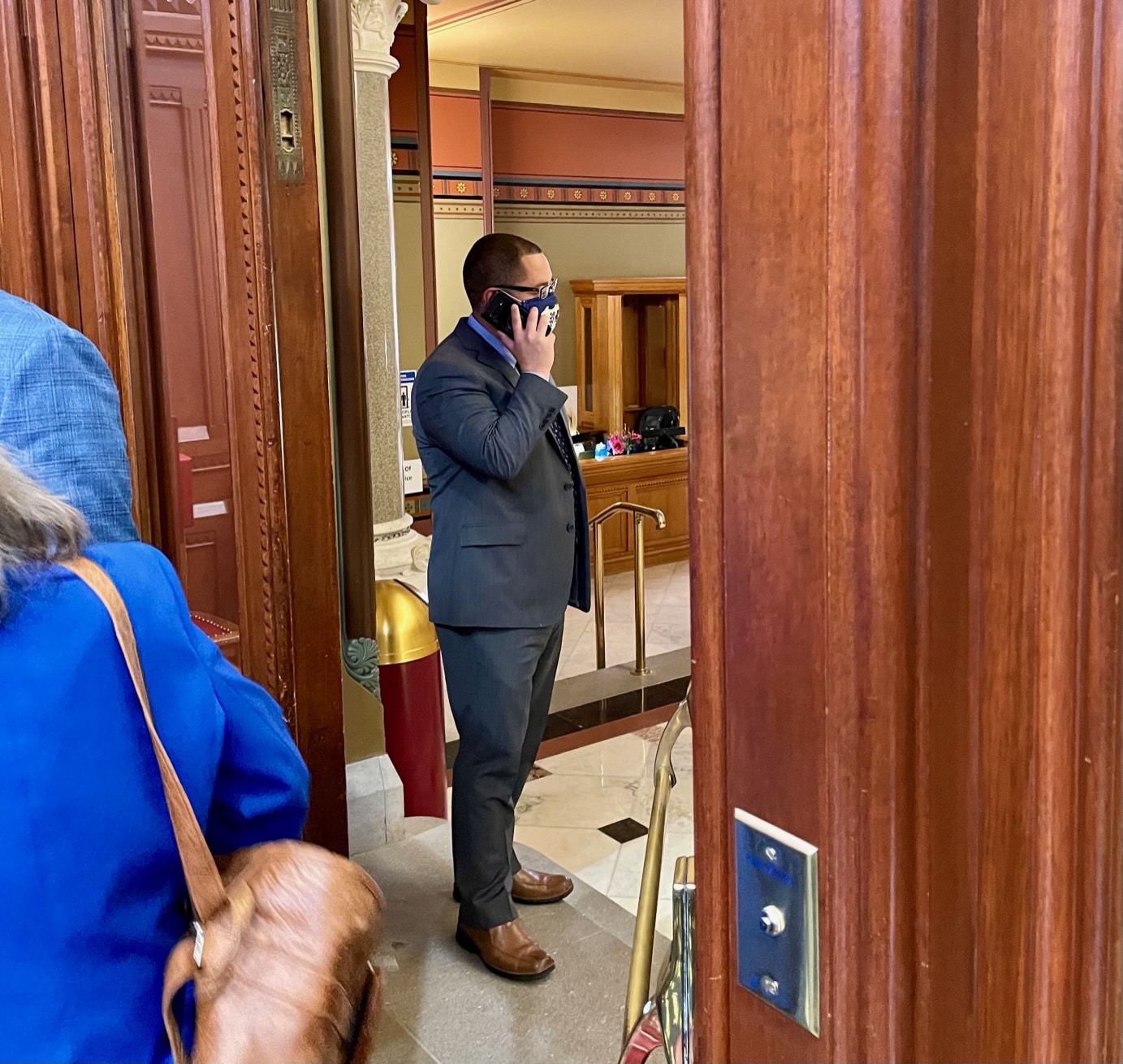 House Majority Leader Jason Rojas on the phone with Rep. Robyn Porter. She did not vote.

Rojas, Winfield, and Porter belong to the caucus, and Ritter and Senate President Pro Tem Martin M. Looney, D-New Haven, had largely deferred to them on the question of how legal marijuana should become an instrument for addressing racial, social and economic injustice.

“There was a deal where all of us were at the table, where we all agreed that this is the definition of equity applicant,” Candelaria said. “And the deal was broken in the Senate without having conversation with the same people that were at the table. I felt very disrespected.”

Rep. Joshua Hall, D-Hartford, said support for equity was universal, if the definition was not.

“It’s just frustrating that we reached this point, and it can certainly go down the drain, which from my perspective is just not necessary at this time.” Hall said.

Winfield said his motive was to halt what he saw as an erosion of support in the House.

“When we were coming in yesterday, I was getting calls. This thing was falling apart,” Winfield said. “As I explained to the governor’s staff, people can view it however they want. But if there is no bill, no deal matters. The question was whether we were going to pass this through the Senate and have it fall apart in the House. That’s the call you have to make.”

Porter left a House Democratic caucus meeting visibly distraught, saying she was too upset to talk. Having accompanied a colleague who fell ill in the morning, she was absent from the House during the debate and was among the 10 Democrats and three Republicans who missed the vote..

On Facebook, she had posted a defiant message that seemed directed at the governor’s veto threat: “I dare him.” 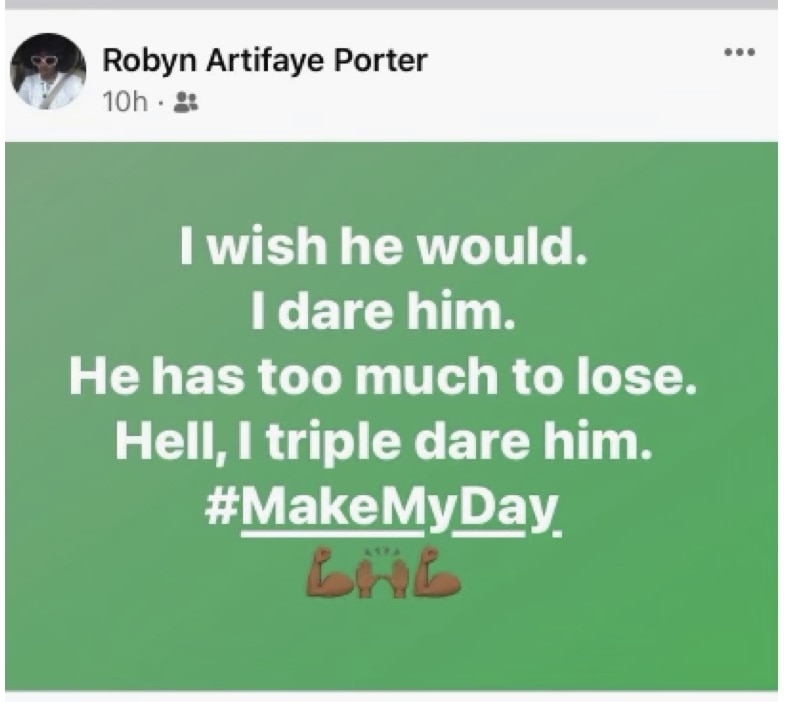 A message Porter posted on Facebook after the governor\s veto threat.

“We knew when we began this legislative session that there was going to be a lot of commotion on this bill. There was going to be a lot of ideas about this bill, and that the vote count was always going to be very, very close,” Rojas said. “You know Sen. Winfield and I have spoken. We’ve remained friends. We remain trusted colleagues. Sometimes you make a decision that you think is in the best interest of something, and sometimes it works and sometimes it doesn’t.”

There was no unanimity in the Black and Puerto Rican Caucus. Rep. Anthony Nolan, D-New London, a police officer, rose in opposition, saying he spoke for the people of color unhappy with legalization. He said, “There are many out there.”

Four members of the Black and Puerto Rican caucus opposed the bill, including its chair, Rep. Gerry Reyes, D-Waterbury.

On the issue of commercialization, there was common cause on the political left and right. House Minority Leader Vincent J. Candelora, R-North Branford, who is at odds with Porter on most issues, shared her concerns about marijuana as big business.

“To Rep. Porter’s issue, this industry is controlled by big money and big corporate talking heads,” Candelora said. “And so she is trying to create a sort of mainstream grassroots economic opportunity for people that are within the state of Connecticut. The reality is that it just isn’t wired that way. So it’s really fighting the tide.”

The bill would create a Social Equity Council to promote and encourage participation in the marijuana industry by people from communities disproportionately harmed by marijuana prohibition. The council would establish criteria and review social equity applications.

Under the bill, the Department of Consumer Protection must reserve 50% of the maximum number of applications for these applicants, who generally would pay licensing fees costing half what is charged to others for the first three years.

The bill leaves to regulators the question of how many licenses should be issued. The state authorized 10 licenses for medical marijuana production, but only issued four. It allows limited home-grown cannabis, beginning in October for medical card holders and in July 2023 for recreational users.