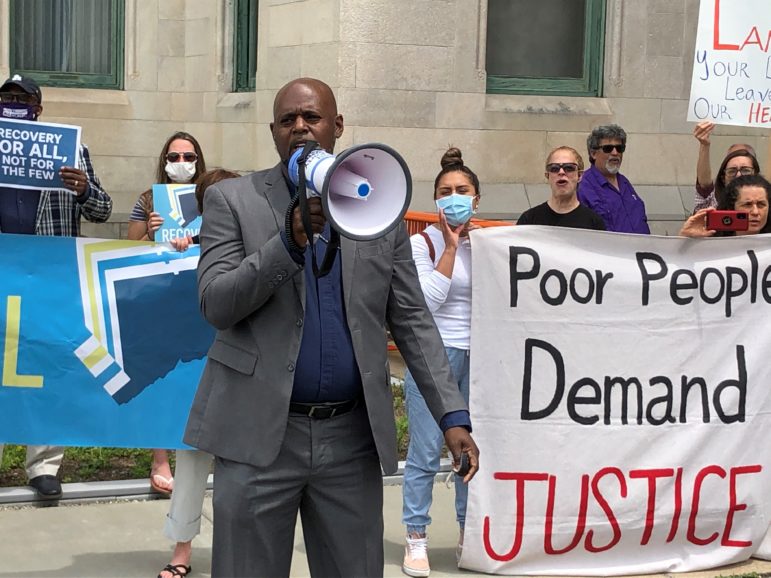 The Rev. Rodney Wade, pastor of the Long Hill Bible Church in Waterbury, speaks during a rally of faith and labor leaders outside of the Capitol earlier this month

Even though the state’s coffers, for now, are awash in money, a huge fiscal cliff looms two years from now, when billions of dollars in federal stimulus grants expire.

Despite a record-setting rainy day fund and a new biennial state budget free of major tax hikes, unprecedented unemployment and deep pockets of urban poverty could easily shift Connecticut’s tax fairness debate — which accelerated this past spring — into high gear in 2024.

“We came out of a year from hell, and I think it was really important we came together in terms of our budget,” Gov. Ned Lamont said last Thursday, one day after lawmakers had adjourned a session that adopted a $46.4 billion, two-year state budget that makes big investments in municipal aid, education, health care, social services and economic development — all without major tax hikes.

But about 4% of that plan, nearly $1.8 billion, was propped up by one-time federal coronavirus relief, most of which will have expired after the coming biennium, which starts July 1.

And that’s not the only volatile support holding up state finances.

State income tax receipts tied to paycheck withholding have been coming in this fiscal year at 99% of budgeted levels — despite the fact that more than 170,000 jobless residents continue to receive weekly unemployment benefits. By comparison, Connecticut lost 120,000 jobs in The Great Recession of 2007-09.

But federal enhancements to state unemployment benefits have propped up earnings for thousands of households without work, and most of those benefits are subject to income taxation.

In other words, when the benefits expire and the federal enhancements go away, state income tax receipts could plunge — unless Connecticut can get thousands of people back to work. Further complicating matters, Connecticut still lags most other states in personal income growth.

And quarterly state income tax filings, which primarily involve capital gains and other investment earnings, are projected to bring in $5.44 billion over the next two fiscal years combined.

That’s 35% more than state analysts were projecting for the 2021-23 biennium during the worst days of the pandemic. The Dow Jones Industrial Average closed last Wednesday, the last day of the regular legislative session, at nearly 34,560 points, a whopping 33% higher than it finished on March 4, 2020, just as the pandemic struck Connecticut.

And while the new state budget predicts continued healthy tax receipts related to Wall Street, some legislators fear Connecticut is just one bear market away from trouble.

A significant portion of the House and Senate GOP minorities voted for the budget. “It was Republicans,” Candelora added, “who really held the line on taxes.”

But Lamont, a fiscal moderate, really drove the no-tax-increase bus.

“We don’t need more taxes, but we do need more taxpayers,” was the governor’s mantra during the just-completed session.

Lamont says tax hikes on the wealthy would cause them to flee the state, and increases on any group would take the wind out of Connecticut’s economic sails and stall the best chance of a strong recovery from the coronavirus.

“Overall, there are numerous reasons to be optimistic about the state’s future based on the actions the legislature and the Lamont administration took over the last five-plus months and the broad range of favorable economic news that is shifting the wind to our backs,” said Chris DiPentima, president and CEO of the Connecticut Business and Industry Association.

Connecticut has borrowed more than $700 million since the coronavirus pandemic began in March 2020 to keep the trust afloat and is expected to borrow $300 million more this year. Businesses are assessed to repay that debt.

But while progressive Democrats in the legislature and in labor also are wary of the fiscal cliff, it’s for a different reason.

The legislature’s Finance, Revenue and Bonding Committee pushed hard to increase taxes this year, arguing the state cannot recover from the pandemic unless it corrects a longstanding imbalance in its tax structure.

Connecticut’s state and municipal tax systems, critics say, lean disproportionately hard on the poor and middle class, who were in trouble before COVID-19 arrived, and were hurt worst by the pandemic.

The committee recommended two state income tax surcharges on the wealthy and a new digital media ads levy. It also called for a big boost in the Earned Income Tax Credit that assists the working poor, along with a new child credit within the state income tax that would have pumped $300 million annually in low-and middle-income households.

The tax hikes, and the child tax credit, were blocked by Lamont and other fiscal moderates and conservatives.

And the EITC increase was approved, albeit in a scaled-back fashion.

Progressives made their biggest gains in municipal aid.

The PILOT [Payments In Lieu Of Taxes] grants that reimburse communities for lost revenue tied to property that is exempt for local taxation increase by more than $120 million in each year of the budget. And Education Cost Sharing grants to local school districts increase by about $140 million over the biennium.

Should the “cliff effect” punch a big hole in state finances two years from now, moderates and conservatives — if they follow their playbook from the last recession — will be pushing to trim social services spending and pull back tax relief for the poor, rather than increase taxes on any group.

“There are people who’ve made a tremendous amount of money” in the past year, Looney said, adding the state should ask more from the wealthy two years from now, if finances slip into the red.

Sen. John Fonfara, D-New Haven, co-chairman of the finance committee, spearheaded the proposals to tax the wealthy and large corporations.

Frustrated at those who blocked those hikes, Fonfara likened Connecticut’s lack of response to long-standing racial inequities in education, health care and economic opportunity to the Minneapolis police’s killing of George Floyd, the 2020 crime that set off a national debate over criminal and economic justice.

“The status-quo budget leaves us with status-quo results. When our policies fail to address [the needs] in a sustained way, it’s as though we have –,” Fonfara hesitated. Then he continued and said, “Our policies are a knee on the neck of the Black community and other underserved communities of our state. We can do better, and we must do better.”

Faith and labor leaders formed The Recovery For All Coalition to push for more tax fairness and offered their own mantra to counter’s Lamont’s: “There is no equity without revenue.”

And if state finances fall off a fiscal cliff in two years, coalition members say, the wealthy must be prepared to step up.

“We need a recovery that just doesn’t bless the rich among us, but also blesses the poor among us,” the Rev. Rodney Wade, pastor of the Long Hill Bible Church in Waterbury, said during a June 4 prayer vigil coalition members had in Lamont’s state Capitol parking spot. “And we are standing here in this place to tell the governor that there are many people who believe that he must do the right thing in spite of himself.”

But Lamont predicted the federal relief dollars invested in Connecticut, coupled with federal income tax relief offered to the middle class through the American Rescue Plan Act, would complement the new state budget and be “transformative” to society and the economy.

“Remember, for every tax cut or spending increase, it’s gonna be balanced on the other side,” the governor said. “I’ve really focused a lot on getting this economy growing again … in a way that makes sure that nobody’s left behind.”