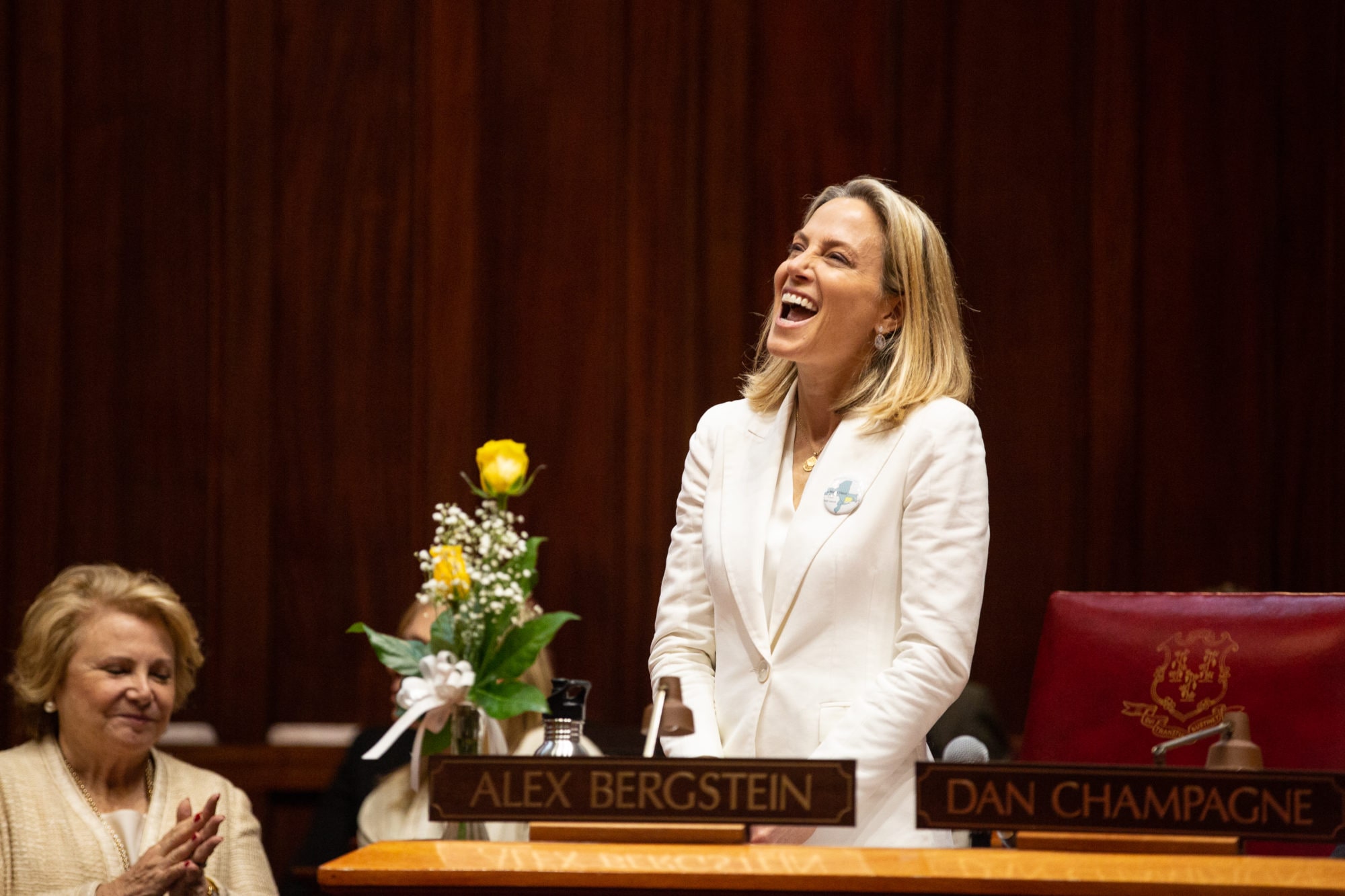 Sen. Alex Kasser, D-Greenwich, who publicly came out as a gay woman after taking office in 2019, announced her resignation from the state Senate in an extraordinary online announcement Tuesday blaming stress from her contentious divorce from her husband, Seth Bergstein.

Kasser said she will be leaving Greenwich with her partner, Nichola Samponaro, as well as exiting the state Senate, and she accused her estranged husband of wrongly blaming Samponaro for causing the end of their marriage.

“The truth is that Nichola’s love, support and willingness to volunteer for me, despite being publicly shamed for her presence in my life, gave me the strength to endure this personal battle and fulfill my responsibility to the public. I will not stay silent as a homophobic, entitled man attacks my partner,” Kasser wrote.

Bergstein’s lawyer, Janet Battey, said her client, a senior executive at Morgan Stanley, denies all allegations of homophobia or harassment.

“Ms. Kasser’s outrageous allegations and narrative couldn’t be further from the truth. Ms. Kasser sadly continues to wage a public battle in the press while simultaneously dragging out the court proceedings,” Battey said. “Throughout the marriage, Ms. Kasser described Seth as a devoted father and patient and loving husband.

“Seth and his three children sought to keep this matter private, but Ms. Kasser continues to make blatantly false public statements in furtherance of her own agenda. Mr. Bergstein trusts the legal system and family court and that the upcoming trial will reveal Ms. Kasser’s narrative for what it is.”

Kasser, who could not be reached for comment Tuesday, notified Senate Democrats minutes before posting her announcement. She did not attend last week’s special session, when the Senate voted for a bill to legalize marijuana.

Senate President Pro Martin M. Looney, D-New Haven, said he had no inkling she was thinking of resigning until she phoned him Monday, not long before posting her announcement and submitting a formal resignation letter to the Secretary of the State.

“We are disappointed that Senator Kasser has felt the necessity to resign because of circumstances in her personal life,” Looney said.

Under state law, the governor is required to issue a writ of special election within 10 days of a vacancy in the General Assembly, and a special election must be held 46 days after the writ has been issued. With her departure, the Democratic majority shrinks to 23-12.

Kasser had been preparing for a high-profile divorce trial this summer.

Kasser’s divorce had come to inform her legislative advocacy. She was a prominent supporter of a bill passed this year that broadens the definition of domestic violence to include “coercive control.”

Kasser has said she felt coerced to remain with her husband after coming out to him as gay in 2010. Bergstein denies the accusation, which was made in court filings and other public statements, including an op-ed piece Kasser wrote for the Stamford Advocate shortly before her re-election to a second term in 2020.

Her victory in 2018, unseating Republican Scott Frantz, was evidence of the erosion of GOP support in Fairfield County since the election of Donald J. Trump as president. Kasser was the first Democrat elected to the state Senate from Greenwich since the mid-term election of 1930, when Republicans were wounded by a deepening Depression and an unpopular Herbert Hoover.

“I ran for office because we need leaders who put principle before party and are loyal to facts, not factions,” Kasser wrote Tuesday. “In court filings, Seth Bergstein accuses me of being ambitious. It is astounding that men are lauded for their ambition while women are still vilified for theirs.”

“I am forever grateful for the honor of representing this district and the opportunity to move the needle towards progress,” Kasser wrote. “I thank those who supported me during this difficult time and I wish everyone peace.”