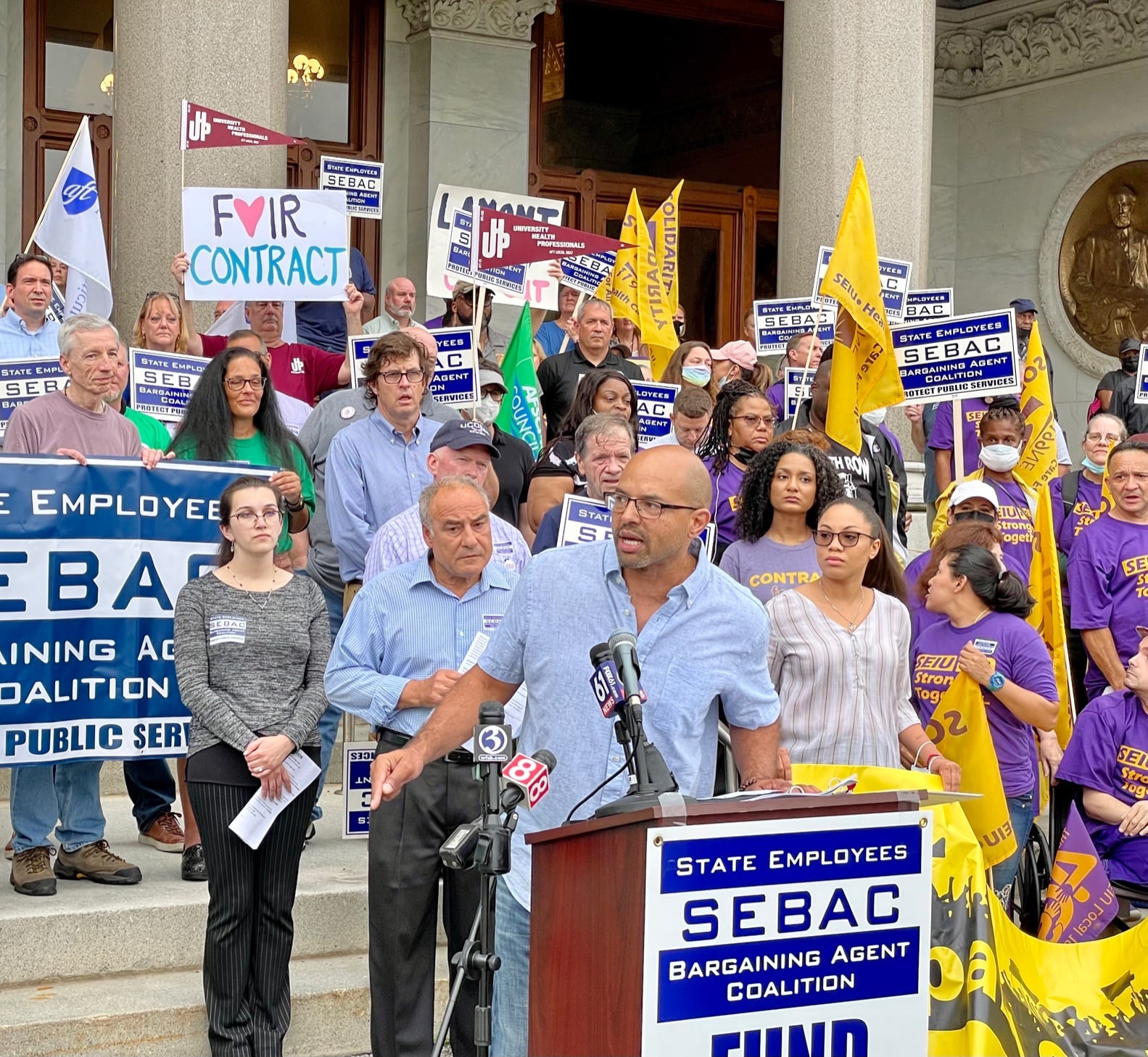 Rob Baril, the president of SEIU 1199, says state employees serve raises. Behind him to the left is Sal Luciano, president of the state AFL-CIO.

Unionized state employees emphasized their roles in preserving essential services during the COVID-19 pandemic Tuesday as they protested the refusal of Gov. Ned Lamont’s administration to offer raises in contract talks that seem headed to binding arbitration.

Hundreds marched around the state Capitol at a rally calculated to highlight the range of services provided by the roughly 40,000 workers whose contracts expired on June 30, plus perhaps another 10,000 in state-funded private caregivers.

The rally comes as Lamont, a Democrat who was rebuffed when he asked state employees to delay raises a year ago as the economy tanked and private-sector unemployment spiked, is stepping up a soft campaign for re-election. Lamont is not expected t0 formally declare his candidacy until next year, but he has been waging a de facto campaign for months.

Rob Baril, the president of SEIU 1199, said the employees “have been under incredible, incredible stress and strain dealing with short staffing, dealing with jobs that had been exposed to the pandemic.”

“And how has the state of Connecticut repaid them?” Baril said. “With zero in raises, with zero in respect, with zero in the advances that every working person in the state deserves to be able to provide for themselves and for their families.”

The administration declined to comment on the state of the negotiations with about 15 different bargaining units. Union members, who are barred from striking, said no impasse has been declared, a necessary step before the talks go into binding arbitration.

Arbitrators would have to determine the state’s ability to pay raises, a complicated task in a state that currently is awash in cash yet faces long-term challenges of unfunded pension liabilities and slow economic growth.

The unions, many of whom endorsed Lamont in 2018, said the governor should revisit his refusal to raise taxes on the wealthy if he is concerned about the inability to pay for raises or to maintain services.

“We are flush with money in this state right now,” said Colena Sesanker, a Gateway Community College professor. “When some of us proposed ways to raise revenue so that we could better fund these services into the future, we were told that now is not the time. We’re doing fine. Well, when you have enough, the way you choose to spend it reflects your values.” 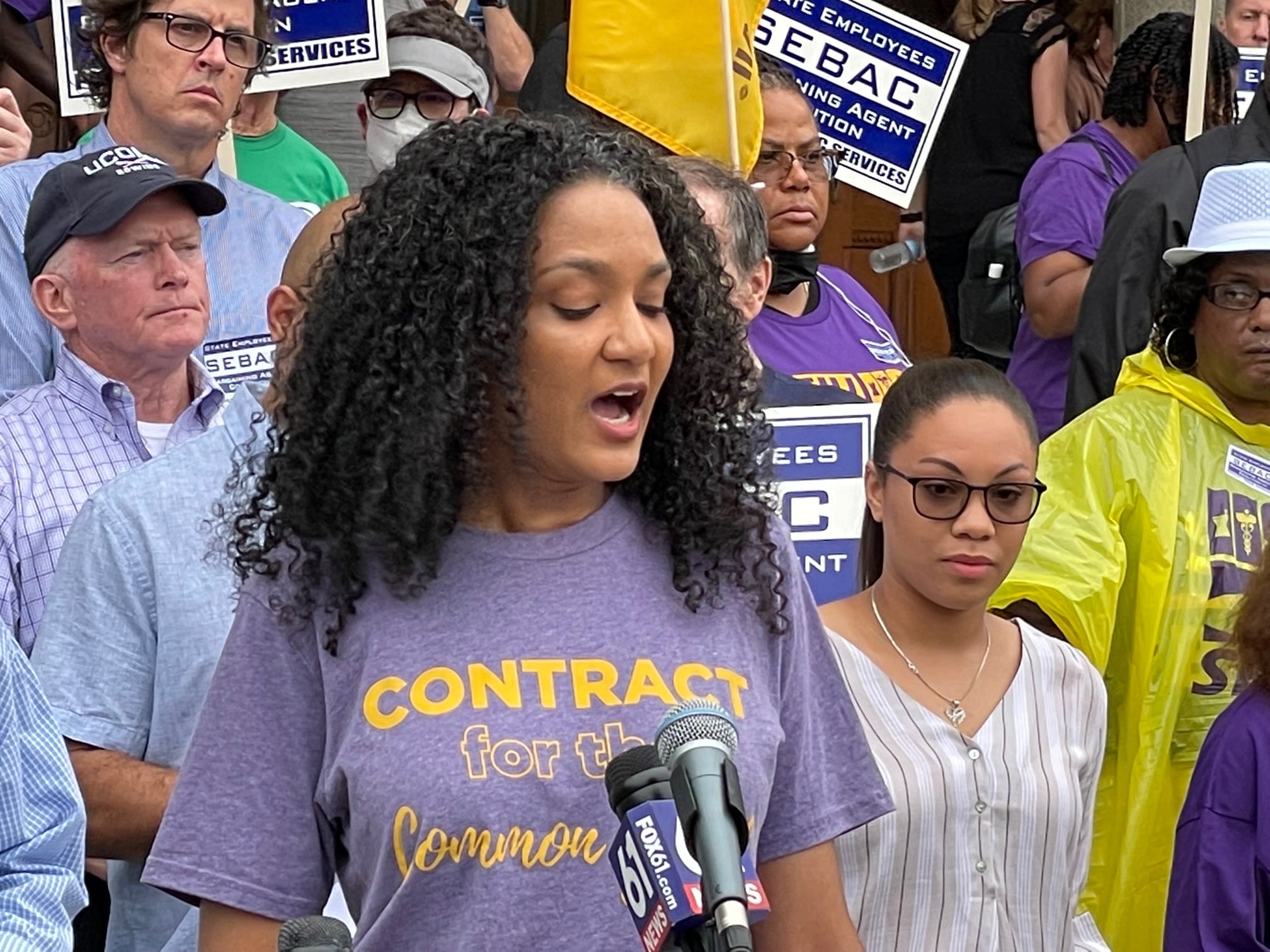 Tax revenues have been unexpectedly strong this year, and the state has received billions in federal pandemic aid. A year ago, the deficit projections were dire, and Lamont asked unions to forgo raises due them under a 2017 contract.

After four years of no general wage increases, many unionized employees received a 3.5%  increase on July 1, 2020. And all except the most senior also got a 2% step increase. Forfeiting those wages would have saved the state an estimated $132 million.

Len Fasano, who then was the Senate Republican leader, urged that the public and elected officials remember the refusal to postpone the raises when negotiations began on new contracts.

“I just hope they remember that at a time when we all could use a break, they weren’t willing to sit with the governor, a Democratic governor, to work with him,” said Fasano, who did not seek re-election last year.

No one at the rally saw any reason to regret their stance a year ago. Instead, they talked of the risks taken by many to provide services during the pandemic — and hinted at givebacks being sought by the administration and higher-education officials.

“The negotiations weren’t just about zeros,” said Sal Luciano, the president of the state AFL-CIO, a statewide federation dominated by public-sector unions. “In the beginning, it was about even the lack of respect, that we’re looking to take away contract language that had been in existence for 40 years.”

He spoke at a microphone in front of state workers.