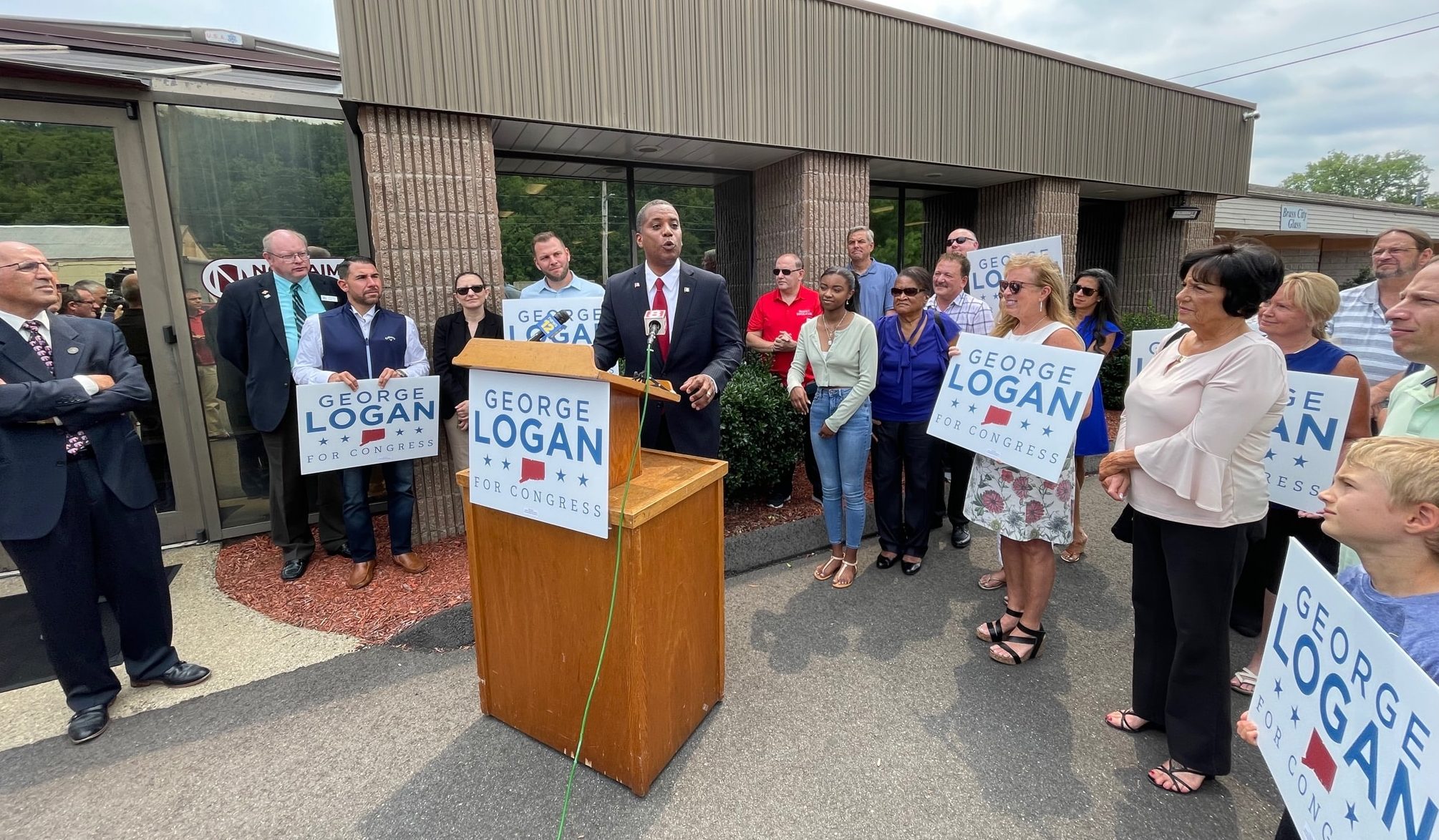 WATERBURY — George Logan, a Republican who twice won state Senate elections in a Democratic district before losing in 2020, will test whether he can replicate his success on a bigger stage to become the first Connecticut GOP candidate to win a congressional race in 16 years.

Logan, 52, the only Black member of the Senate GOP caucus during his tenure, opened a campaign Wednesday to unseat U.S. Rep. Jahana Hayes, D-5th District, a political novice in 2018 when she became the first Black woman elected to Congress from Connecticut and one of the first two in New England.

Republicans generally shrink from identity politics, but Logan mentioned his heritage as the son of Guatemalan immigrants who had roots in Jamaica in an announcement outside the Noujaim Tool Company, a precision metal fabricator owned by a Lebanese immigrant family prominent in Republican politics in the Naugatuck Valley.

“My family sought what millions of others had — the chance to grow a family and build a better life in America,” said Logan, an engineer and community liaison executive with Aquarion, the water company owned by Eversource.

As a state senator, Logan voted against raising the minimum wage, the creation of a paid family and medical leave program, and a police accountability law passed in response to the murder of George Floyd by a police officer in Minneapolis. He called his political approach “radical sensibility.”

He pronounced himself Wednesday as a supporter of law enforcement, a defender of small business and a skeptic on the scope of the federal relief available during the COVID-19 pandemic, which some Republicans say has contributed to labor shortages.

“Right now, I think we’re going a little bit too far in terms of the type of assistance that we’re giving folks throughout the country, because someone’s got to pay it,” Logan said. “And it’s already having ramifications. So we have to have the right balance. We don’t have the right balance right now.”

He declined to say if he would have voted last month for the INVEST in America Act, a five-year $547 billion transportation reauthorization bill that included $17 million in funding for five projects in the district. Without specifics, he said he would have sought changes.

“I think I can bring more sensibility to Washington, help to bring more sensibility to the bills that are created and make sure that we strike the right balance in terms of the federal government doing the right job with all those federal tax dollars that are coming, but making sure we utilize them effectively and efficiently, and that we don’t cause more problems than we actually solve,” Logan said. 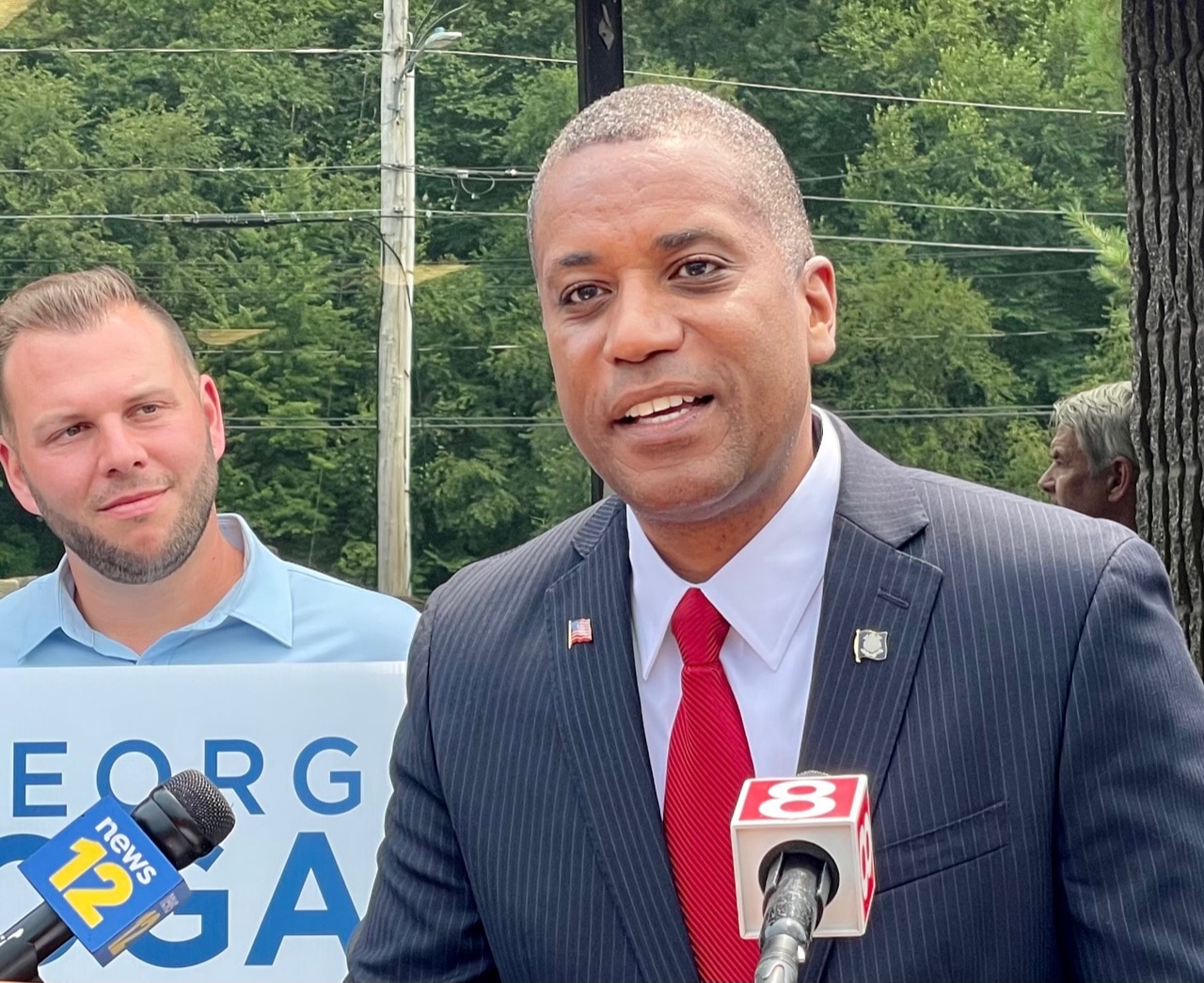 The 5th Congressional District runs along Connecticut’s western border with New York from Danbury in the south to the Litchfield Hills in the state’s northwest corner, encompassing struggling small cities like Meriden and New Britain. Some of its blue-collar communities have been trending Republican, while the GOP’s hold on upscale Farmington Valley suburbs has weakened.

Hayes won with 56% of the vote in 2018 and 55% in 2020, but the district has slightly favored Republicans in gubernatorial races, giving the GOP cause to believe it can be a battleground with the right candidate and adequate funding.

Hayes, who declined comment on Logan’s entrance into the race, has banked $1.2 million in her campaign account.

The National Republican Congressional Committee already has displayed interest in the race, posting an inexpensive digital ad tying Hayes to House Speaker Nancy Pelosi and a statement suggesting a tenuous link between Hayes, and the Defund the Police.

The NRCC points to the support of Hayes by NARAL, the abortion rights group that, at least in one Tweet, also expressed sympathy for defunding the police. Hayes, the wife of a police officer, has disavowed any effort to defund law enforcement.

Logan picked up the Pelosi line of attack, saying that Hayes is “following the radical so-called progressive priorities of folks down in Washington of voting 100% of the time on Nancy Pelosi’s priorities. I’m not going to do that.”

His making Pelosi an issue invited questions about what would be his relationship with a House Republican leadership still loyal to Donald J. Trump, despite his specious claims he actually won the 2020 election.

If the GOP wins a majority, Logan said, he most likely would favor House Minority Leader Kevin McCarthy of California as speaker. McCarthy denounced Trump’s questioning of the legitimacy of the election, then showed his fealty with a high-profile visit to Trump at Mar-a-Lago.

Logan said he had no problem the House GOP conference ousting Liz Cheney of Wyoming from leadership, who broke with Trump over his insistence that the party stand with him in undermining public faith in the election.

He cast his candidacy as a bid for political diversity in a state where the Republicans hold no statewide office, no congressional seats and have lost state legislative seats in each of the past two cycles.

“I’m a moderate Republican, you know. I’m not far conservative by any means,” Logan said. “But I think that we’ve just gone too far left in terms of the priorities that we have here in Connecticut and in Washington.”

Logan chatted amiably with Bob Stefanowski, the 2018 nominee for governor. But Logan, a guitarist, had a featured role at Gov. Ned Lamont’s inaugural ball — playing the Jimi Hendrix version of the Star Spangled Banner.

Logan, who is married and has an 19-year-old daughter and 22-year-old son, was accompanied at his announcement by family, former colleagues in the General Assembly — and a Realtor, the latter a wry acknowledgement he does not live in the 5th District.

He currently lives in Ansonia, a part of  3rd District. The Constitution requires only that members of Congress be an inhabitant of the state they represent, not the district. Logan said he will buy a house once the district lines are finalized after redistricting.

“Connecticut is a small state to begin with, and so when you talk about congressional districts, you’re talking about political boundaries,” Logan said.

He said he has many connections to the district, including membership on the Housatonic Valley Association, a group advocating protection of a regional watershed, and relatives in Meriden and Simsbury.

“I would argue that I’ve got more touches, and have had more activity in the 5th Congressional District than the incumbent,” he said,

Hayes grew up in Waterbury and lives in Wolcott. She was a public school teacher in Waterbury before her election.

A tenuous connection to the district did not impede Chris Murphy, the Democrat who wrested the seat from Republican Nancy Johnson in 2006. Murphy moved five miles from Southington in the 1st District to Cheshire in the 5th in 2005, a year before successfully challenging Johnson.