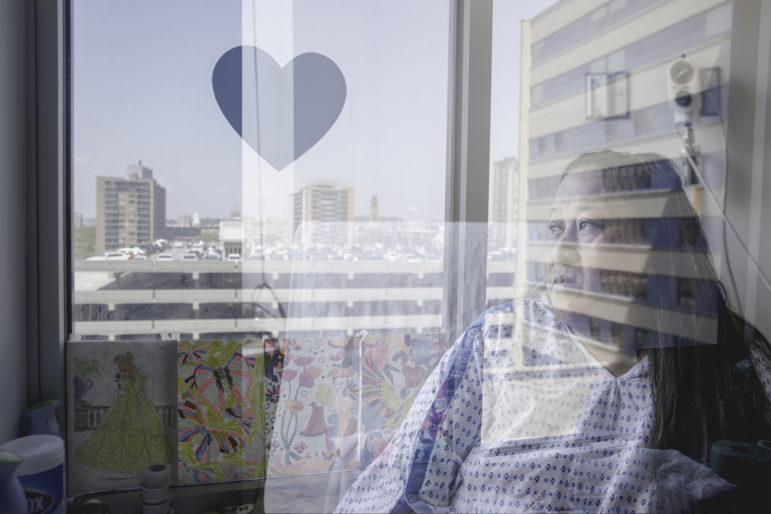 Maria was hospitalized in December and hasn't been able to go outside for more than half a year. She said she was stressed out of staying indoors alone.

Gov. Ned Lamont on Tuesday provided some relief to up to 120 undocumented immigrants stuck in hospitals across the state because that’s the only place they can get life-saving dialysis treatment.

Maria has been healthy enough to leave the hospital and go home to her family for almost seven months.

But she needs dialysis treatment a couple of times a week and the hospital is the only place she has access to it. Without it, she will likely die in just a few days.

Maria is what some medical providers call a “permanent patient.” Civil rights groups call it a form of “humanitarian incarceration.”

The federal government requires hospitals to provide life-sustaining treatment to undocumented immigrants who show up in their emergency departments and to treat them until they can be discharged safely.

That’s means Yale New Haven Hospital hasn’t been able to discharge Maria because it has been the state’s policy not to cover outpatient dialysis treatment.

The governor changed that policy Tuesday – and Maria is looking forward to going home soon to her husband.

She says the first thing she’ll do is go to church, a place she hasn’t been since November.

“The nurses are treating me so wonderfully here, so I will definitely miss them, but I will definitely not miss the food,” Maria said through a translator from her hospital room shortly after receiving the news.

Connecticut Public is not disclosing Maria’s real name at her request because she is undocumented and fears deportation. The change is expected to help from 35-120 undocumented immigrants each year. The costs to the state range from $722,000 to $2.4 million.

“That makes me so happy that this is gonna change things for other people,” said Maria.

Maria’s move home is expected to save taxpayers a significant amount of money. Her hospital bill is picked up by the state and federal governments because undocumented immigrants qualify for Medicaid when they are receiving life-sustaining treatment in the hospital. Her nearly seven-month hospital stay has cost more than $1 million compared to the roughly $91,000 a year it costs to get outpatient dialysis treatment.

“We think it’s just the cost effective and humane thing rather than allowing someone to get to the point where they’re so critical and forced into hospital to get life saving treatment.” said Claudio Gualtieri, the undersecretary for health and human services in the governor’s budget and policy office.

With this move by the Democratic governor, Connecticut joins at least 14 other states that cover outpatient treatment, including Massachusetts and New York.

Sheldon Toubman, an attorney with New Haven Legal Services, said he believes a trio of factors led to the Lamont Administration making the change. Immigrant and civil-rights groups have been pleading for the change since last Spring and a top-ranking leader of the state Senate wrote his administration supporting the change this spring. Toubman says the tipping point was the media attention Connecticut Public and The Connecticut Mirror have been giving this issue.

“I’ve just seen it too much. I’m a litigator. I’ve brought many lawsuits and class actions — but really, at the end of the day, without the media, you’re unlikely to win. It’s just the reality,” said Toubman.

Camila Bortolleto, one of the leaders of CT Students for a Dream, said a combination of advocacy, political support, and media attention prompted Lamont to act.

“I think this really speaks to the power of people speaking out, and calling attention to injustice,” she said. “Having people speak out how this is the right thing to do really helped move it along.”

This story was originally published July 21, 2021, by Connecticut Public Radio.