Is 'appalled' by report that Cuomo sexually harassed 11 women 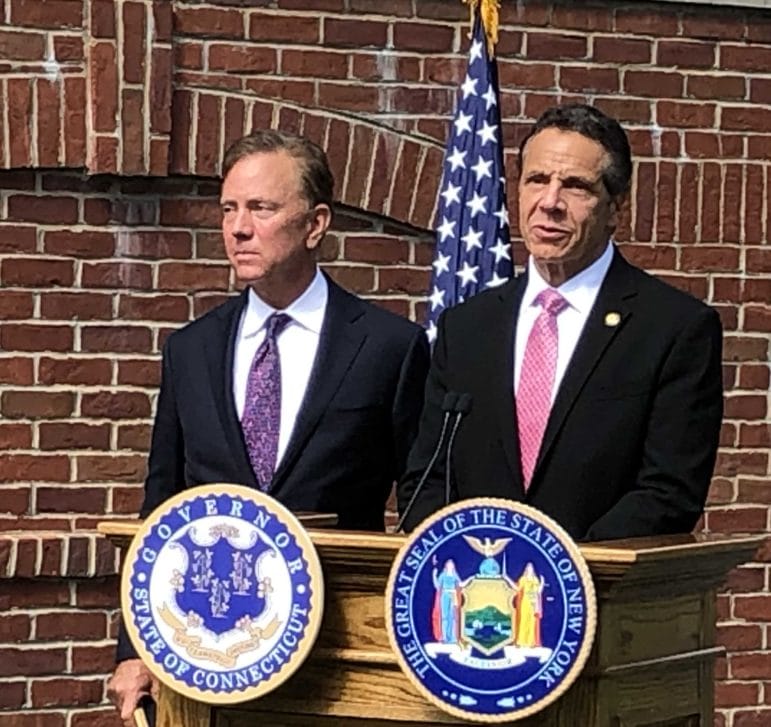 Connecticut Gov. Ned Lamont (left) and New York Gov. Andrew Cuomo talking with reporters in  September 2019 outside of the governor’s residence in Hartford.

“We are appalled at the findings of the independent investigation by the New York Attorney General,” Lamont wrote in a joint statement with Govs. Dan McKee of Rhode Island, Phil Murphy of New Jersey and Tom Wolf of Pennsylvania. “Governor Cuomo should resign from office.”

The New York Times reported Tuesday that Cuomo had violated both state and local laws, citing a report from New York Attorney General Letitia James. Instances of harassment, which involved current and former government employees, are expected to trigger an impeachment inquiry against Cuomo soon by the New York legislature, the Times reported.

The calls for resignation from Lamont and other Northeastern governors joined a growing list that was topped Tuesday by President Joe Biden.

Lamont, like the president, had been hesitant to speculate on what Cuomo should do while James’ five-month-long investigation was pending.

The Connecticut governor had developed a cordial working relationship with his New York counterpart during Lamont’s first two-and-a-half years on the job.

They consulted periodically early in the coronavirus pandemic on restrictions to be placed on restaurants, other businesses and travel, though they ultimately settled on different policies.

Connecticut and New York found themselves on opposing sides of a multi-state court battle over state income tax jurisdiction involving telecommuters, but both Lamont and Cuomo avoided any rancor in that matter.

Lamont interrupted a two-week vacation at his summer home in Maine in August 2019 to fly to Lockport, N.Y., for a morning of sport fishing and transportation policy talks with Cuomo on Lake Ontario.

Later, Cuomo met with Lamont at the Connecticut governor’s residence to discuss regional strategies to regulate the sale of marijuana for recreational use and to curb use of flavored vaping products.

“New York City is the global capital of the world, and we are part of that,” Lamont said at the September 2019 meeting. “And the more we work together, be it on transportation and these other things, the better it is for Connecticut. I think the better it is for our region, including New York.”