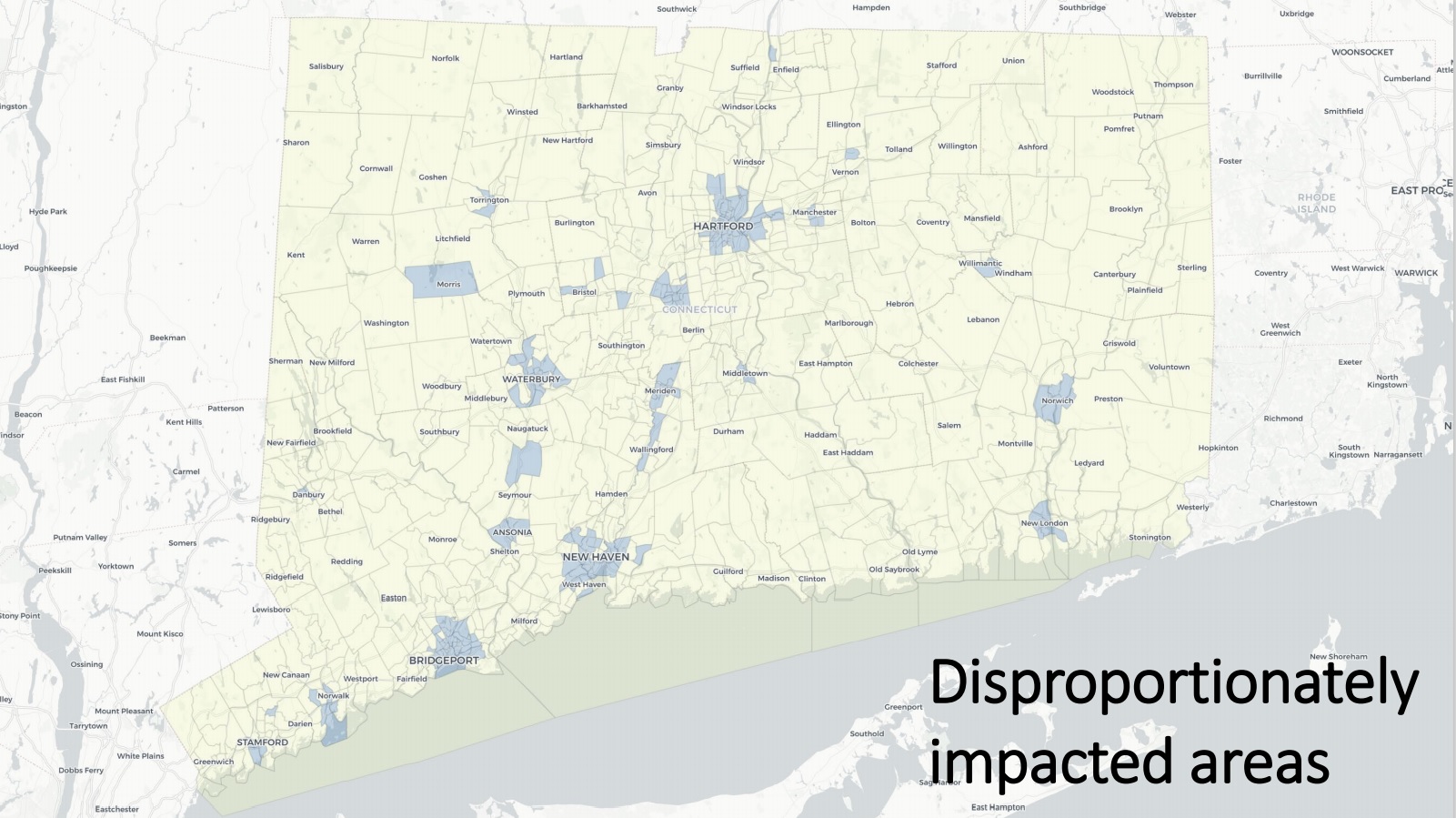 These 215 census tracts represent 22.8% of the population of the state. About two-thirds of historical drug convictions were attributed to people living in these tracts.

The Social Equity Council approved Thursday a list of 215 communities that will be prioritized for marijuana sales licenses and special equity programs.

The council approved the list in its first meeting since legislators passed the cannabis legalization bill in the waning days of the legislative session. One of the new law’s main goals is to help communities disproportionately harmed by the war on drugs by giving those residents equitable access to a marketplace that could generate up to $40 million in annual revenue.

In opening remarks, Gov. Ned Lamont said the state’s regulation efforts were about giving people from these areas a chance to support themselves and their families. Sometimes, Lamont said, would-be entrepreneurs have the experience and plan to start a business, but they still struggle to make their dreams a reality.

The presentation revealed a startling figure: two-thirds of drug convictions between 1982 and 2020 took place in those census tracts, which contain just over 20% of the state’s population.

“I think that statistic really demonstrates how disproportionate the enforcement of the war on drugs has been,” said Patrick Hulin, associate policy director at the Office of the Governor.

The designations will affect who can apply for a license as a social equity applicant. Those marijuana businesses will need to be at least 65% owned and controlled by people who had an average household income of less than 300% of the state’s median household income over the last three tax years, and be either a resident of a disproportionately impacted area for at least five of the last 10 years or have spent at least nine years living in one of those communities before they turned 18 years old.

The council unanimously approved the designations of the disproportionately impacted areas, but not before some members objected to having to do so in their very first meeting without first discussing the impact of the war on drugs in depth.

“I just find it just a bit troubling to be voting on a disproportionate area on our first meeting without really having these true discussions,” said Corrie Betts, the criminal justice chair of the Connecticut State Conference of the NAACP.

Other members pointed to the tight timeline the council must adhere to, per the statute. Certifying the areas that qualify for equity programs must be done before applications for licenses open. Mindful of the amount of work the council must complete, the governor’s office and an interagency team prepared a recommended list of disproportionately impacted areas, which the council ultimately approved Thursday.

“I think that the timeline that’s been designated in the legislation is really ambitious, and it has not given us a significant amount of time,” said Andrea Comer, the interim deputy commissioner of the Department of Consumer Protection and chair of the council. “I would suggest that maybe we not let the pursuit of perfection be the enemy of the good and the enemy of progress.”

The Social Equity Council’s timeline. The group also voted to push back to Sept. 15 the RFP deadline to examine the historical and present-day impacts of marijuana on disproportionately impacted communities.

Members spoke of the council’s role in getting marijuana legalization and sale “right” in Connecticut, of rolling back the harms of the war on drugs and breaking the cycles of generational poverty in the state’s most under-resourced communities.

“We have to ensure that the person who was doing it illegally has a pathway to entry to the legal part of this business,” said Subira Gordon, the executive director of ConnCan, the education advocacy group.

Lamont said there were many metrics to deeming Connecticut’s marijuana legalization a success. For him, one will be visiting those disproportionately impacted areas in five years, meeting with people who started local businesses who will tell him, “‘I got my start with the social equity council.'”