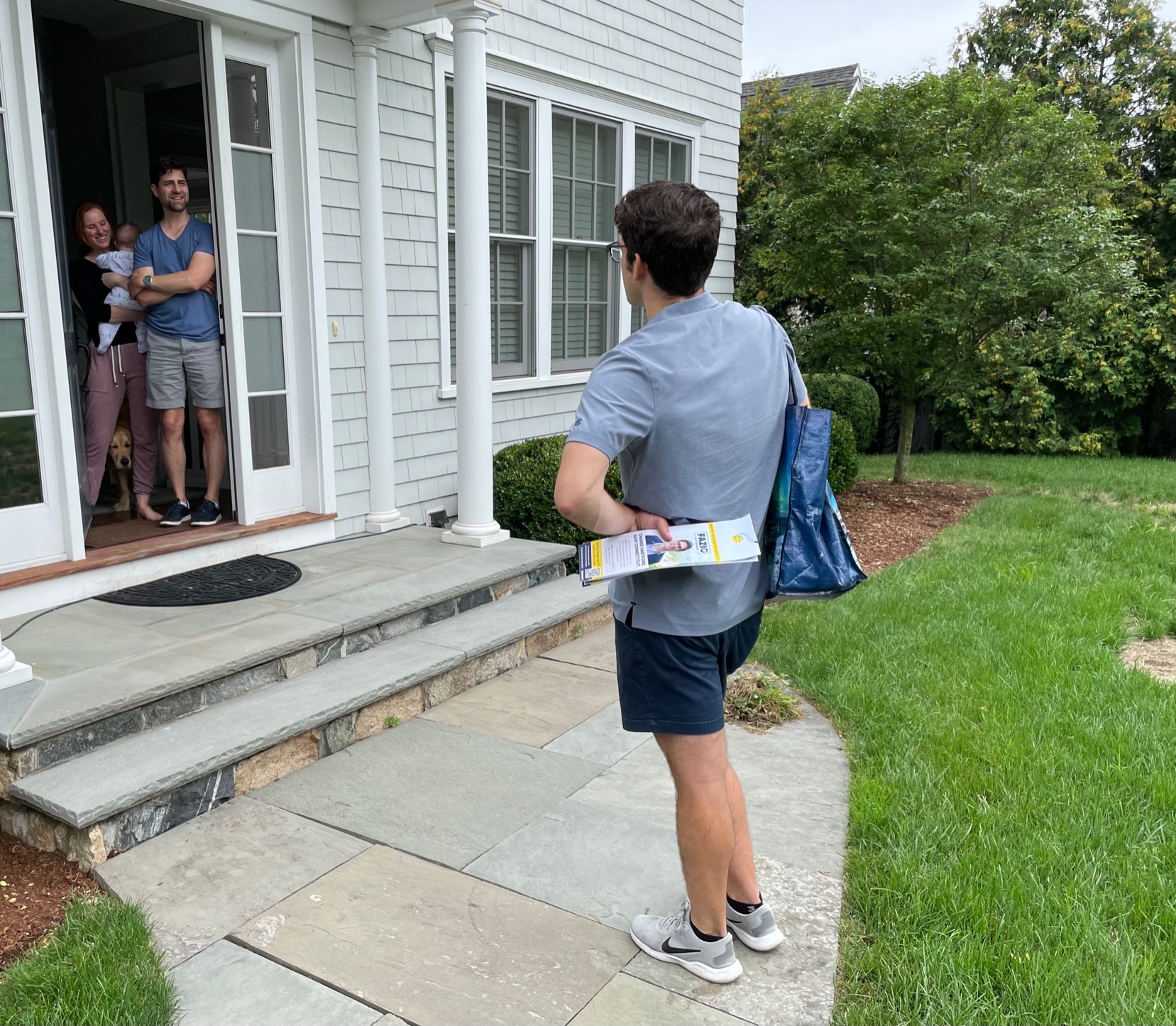 GREENWICH — Republican Ryan Fazio was elected Tuesday to the state Senate from the 36th District, reclaiming for the GOP what had been a reliably safe seat in Fairfield County until the election of Donald J. Trump in 2016.

Buoyed by solid turnout in Republican precincts and the benefits of having run for the seat just nine months ago, Fazio won a three-way special election forced by the resignation of Alex Kasser, the Democrat who unseated a Republican in 2018 and was re-elected last year. The district covers Greenwich and portions of Stamford and New Canaan.

The Democratic nominee was Alexis Gevanter, a first-time candidate and gun-control advocate who had to contend with Fazio and John Blankley, a Democrat who ran as a petitioning candidate after failing to win the party endorsement. Gevanter conceded less than two hours after the polls closed.

Fazio’s victory does little to change the balance of power in Hartford or the 36th District’s status as a battleground in Fairfield County, but it gives a demoralized Connecticut Republican Party a needed boost and hope that the wealthiest corner of the state is not permanently lost to the GOP while the party becomes stronger in blue-collar Democratic areas.

“I think the recipe, ultimately, for statewide victory for Republicans is to continue to do better in places like the Naugatuck Valley and eastern Connecticut but also stop the losses or reverse the losses in lower Fairfield County,” Fazio said. “This is not a Connecticut-specific trend, this is a national trend.”

An affiliate of the Republican National Committee noted that the election produced the first flip of a state legislative seat by either party in 2021 — and it came in a district handily won by Joe Biden last year.

Ben Proto, the newly elected Republican state chairman, said the victory was Fazio’s, but the race should be a template for how an often-factionalized state party can win in a swing district. As did the Democrats, Republicans from outside the district helped with voter outreach in the abbreviated, late-summer campaign.

“It means a great deal to the party,” Proto said. “A lot of people worked really hard over the state, and part of what I wanted to do was to get people working together.”

Fazio, 31, an employee of an investment firm and a member of the Representative Town Meeting in Greenwich, will finish the two-year term of Kasser, who quit the Senate and moved from Greenwich in the midst of a difficult divorce. 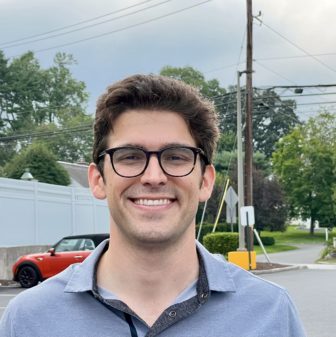 Democrats will control the Connecticut Senate with a 23-13 majority, one less than a super-majority capable of overriding vetoes — something that has not been attempted since the election of Gov. Ned Lamont, a Democrat, in 2018.

After a Democratic blowout in 2008, Republicans made steady gains, peaking in 2016 with an 18-18 split in the Senate and close to a majority in the House in 2016. But the backlash to Trump has been costly, with Democrats winning solid majorities in 2018 and 2020 — including two Fairfield County seats long in the hands of the GOP.

Kasser was the first Democrat elected to the state Senate from Greenwich since the Great Depression, capitalizing on animus to Trump and the GOP’s loss of voters on the Gold Coast to the ranks of the unaffiliated and Democratic voters.

The 36th District covers all of Greenwich and portions of Stamford and New Canaan. All three candidates were from Greenwich, home to 62% of the district’s 66,811 voters. Stamford has 28% and New Canaan 11%.

Fazio won big in New Canaan, lost in Stamford and made up the difference in Greenwich, which he carried with 51.9% of the vote to 45.4% for Gevanter and 2.7% for Blankley. Once solidly Republican, voter registration in the district now slightly favors Democrats over Republicans: 21,291 to 19,194, but the largest bloc is 25,079 unaffiliated voters.

“This is always going to be a challenging district generally for Republicans. The Democrats now have a 3% advantage in voter registration, and so we have to work very hard to persuade unaffiliated voters, people in the middle, that it’s time for a change in direction in the policy in the state government. And I think we were very clear about that message throughout,” Fazio said.

Those issues were the economy, the cost of living, crime and policing, and local control over education, he said.

Gevanter, 39, who spent Tuesday afternoon going door to door with her husband, Robert Gould, hedged Tuesday night on  whether she would consider running next year, when the Democratic ticket would be led by two Greenwich residents: Lamont and U.S. Sen. Richard Blumenthal.

She issued a statement that seemed to leave open the door: “Despite tonight’s disappointing results, my commitment to the very values that make our community the inclusive, kind, and caring place we are all proud to call home has never been stronger.”

Later, in a text message, she added, “At the moment, I’m looking forward to enjoying the rest of the summer with my family and I’ll figure out what comes next after that.” 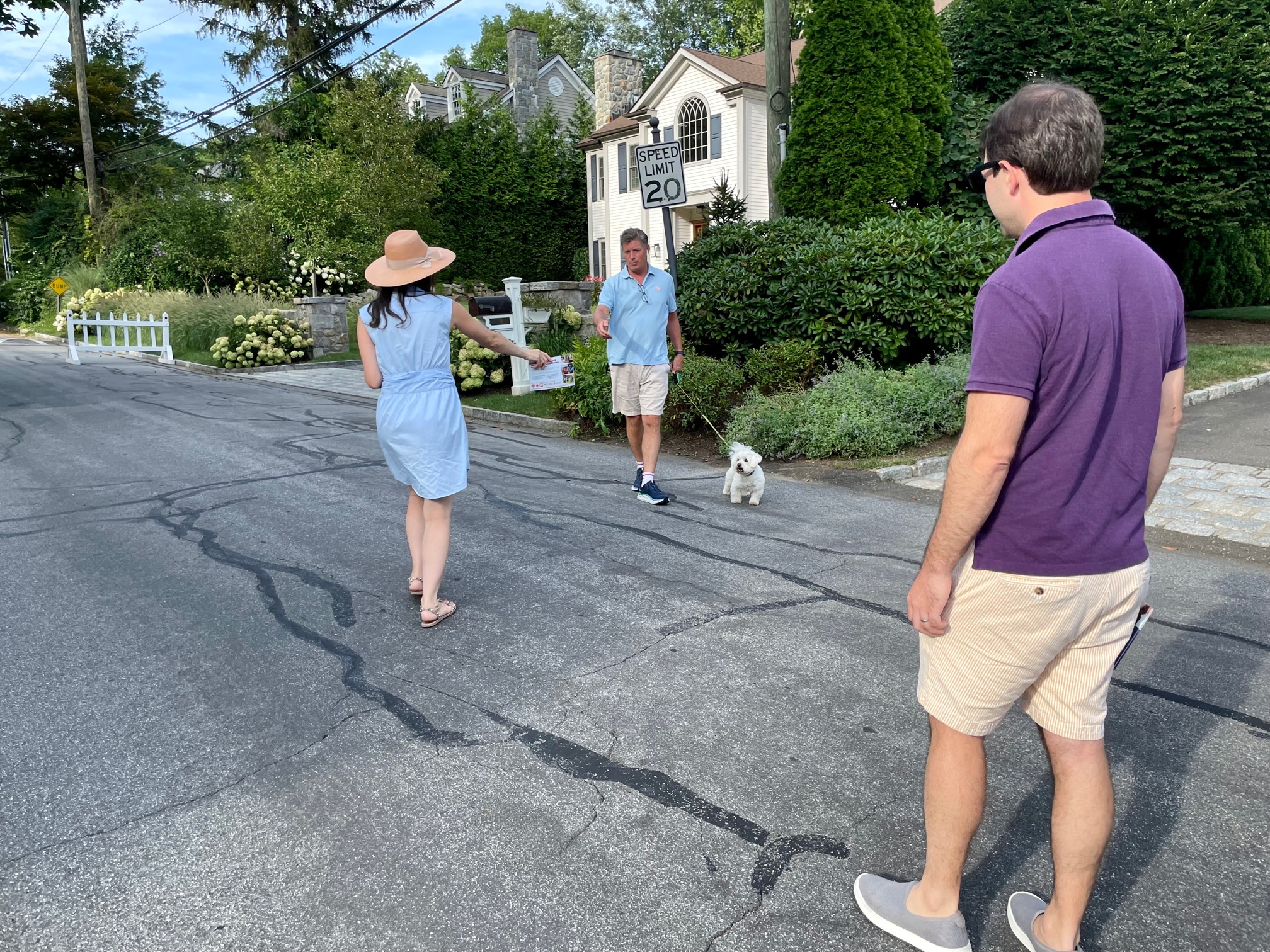 Alexis Gevanter approaches a voter Tuesday afternoon in Greenwich. Her husband is at right.