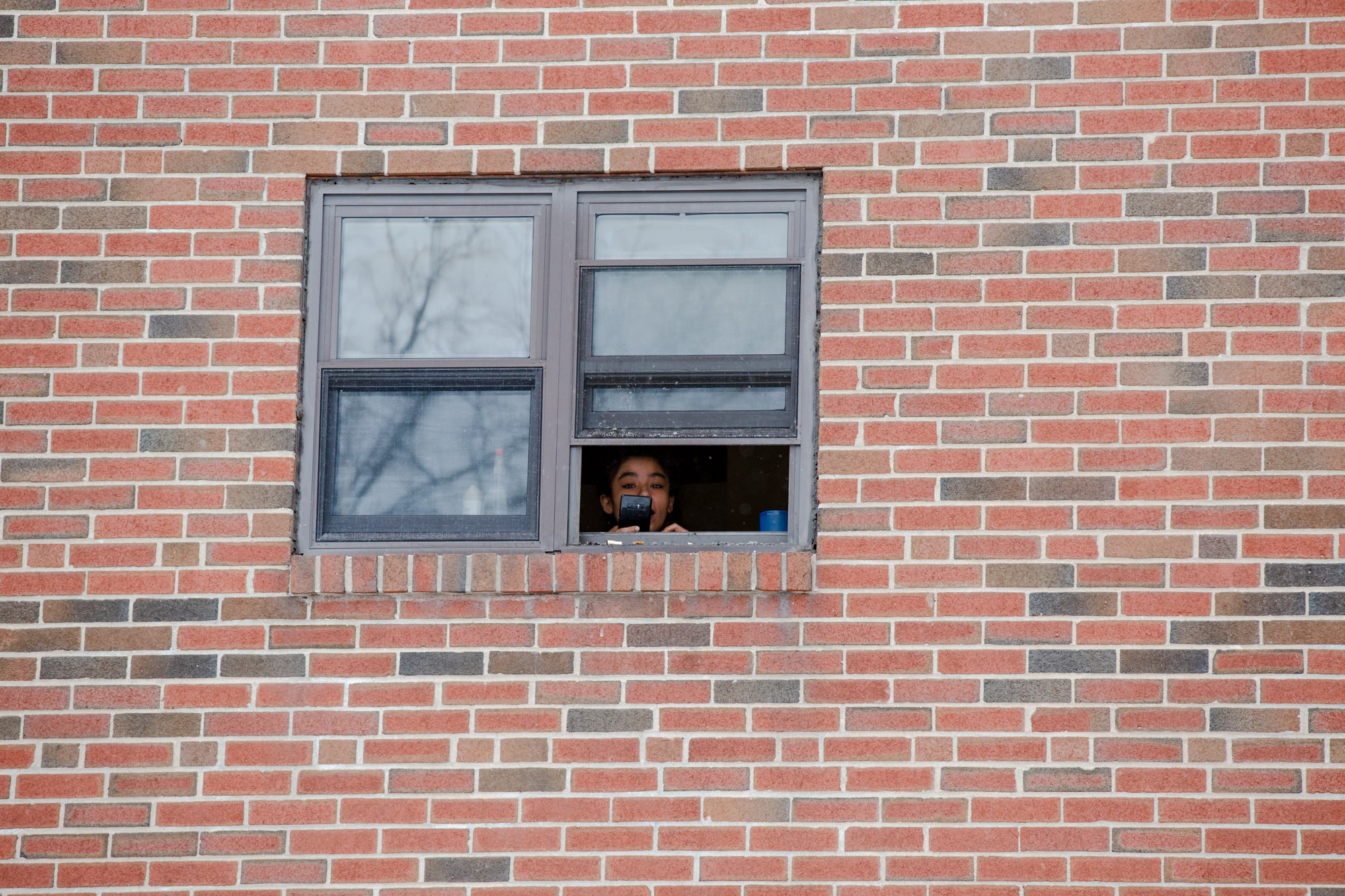 A resident of an apartment where a family at risk of eviction lives looks out the window as protesters and media stand outside in February, 2021.

With federal moratorium on evictions no longer in place, and a temporary state safeguard set to expire on Sept. 30, Connecticut legislators must decide soon whether to act to protect tens of thousands of at-risk renters.

The risk of mass evictions increased this week when the U.S. Supreme Court rejected the latest moratorium sought by President Joe Biden’s administration. The Centers for Disease Control and Prevention’s moratorium had expired at the end of July. But the high court ruled the administration exceeded its authority on Aug. 3 when it imposed new limits through Oct. 3.

Gov. Ned Lamont had established a moratorium for Connecticut via executive order not long after the coronavirus pandemic began in the spring of 2020. The governor lifted it in late June, replacing it with a two-part compromise:

This compromise will expire, though, when Lamont’s emergency powers expire Sept. 30 — unless the General Assembly grants him another extension. Lamont first received emergency powers early in the pandemic and has received several extensions since then.

“The pandemic isn’t over,” said Erin Kemple, executive director of the Connecticut Fair Housing Center. “I think that because there are vaccinations available there’s a (sense of) denial that evictions can still hurt people.”

And while little is certain about the pandemic, Kemple said, it’s clear that the economic pressures tied to the coronavirus won’t be over in the next month.

According to the U.S Census Bureau’s Household Pulse Survey covering Aug. 4-16, more than 45,200 Connecticut households are behind on rent.

The survey also found more than 157,000 respondents were less than “moderately confident” they could make their rental payments next month.

Roughly 130,000 filers still are receiving weekly unemployment benefits, according to the state Department of Labor. And many of them will take a financial hit starting Sept. 4 when enhanced federal jobless benefits worth $300 per week expire.

The comptroller noted that while overall economic signs for Connecticut are on the upswing — and while state government’s finances are faring well — “Helping renters stay housed should be a critical economic and public health priority. If folks are forced into more congregate settings — or worse, homelessness — it will impede our continued efforts to contain the virus and our efforts to support working people and grow the middle class.”

While Lamont hasn’t yet requested an extension of his emergency powers, neither has the governor ruled that out.

And both Ritter and Looney said they’re focused on the rising concern about protecting renters for longer than one more month.

“Everyone would be hard-pressed to ignore this issue and not deal with it, especially when the federal government will pay for it, by and large,” Ritter said.

The speaker was referring to nearly $236 million in federal pandemic aid granted to Connecticut to avoid evictions. About 10% of those funds go for administrative costs, but the remainder, about $212 million, is available for landlords whose tenants are at risk of eviction, said state Department of Housing spokesman Aaron Turner.

The assistance program labeled UniteCT has committed about $67 million to date, though Turner said another $29 million in assistance is in process.

Looney called the limits Lamont placed on eviction earlier this summer “a reasonable compromise” and “something that can be made to work for a longer time. There are some tenants who are desperately in need of assistance.”

“I’m glad there’s a recognition that our EO (executive order) is a helpful piece in this process,” said Lamont’s communications director, Max Reiss.

And though Reiss didn’t say whether Lamont would seek another extension of his emergency powers, the spokesman added that “we’re pledging to work with both landlords and tenants to ensure we’re providing millions of dollars of assistance a week.”