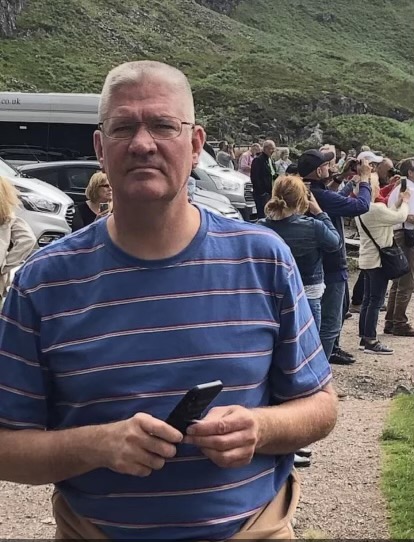 This story was updated at 6 p.m.

A long-time state police sergeant who made a frantic call for help early Thursday morning died after a rising river swept his cruiser off a bridge in Woodbury during the storm.

State police officials Thursday afternoon held a press conference to confirm that Sgt. Brian Mohl, 50, had died after his cruiser was swept into the Pomperaug River around 3:30 a.m. State Police initially didn’t release his name because his family hadn’t been notified. Gov. Ned Lamont sent a press release shortly before 6 p.m. identifying Mohl and ordering flags in the state to be flown at half-staff in his honor.

His is the 25th line-of-duty death in state police history.

At the press conference, Lamont said it was only a week ago that he was at the graduation of the newest group of troopers.

“Here we have, seven days later, a trooper who gave his life. That’s what troopers do — they take care of us very day, and they face danger every day. You just never know what it is going to be,” Lamont said.

State police found Mohl’s cruiser early Thursday morning but searched another 45 minutes before finding the trooper, who had been swept away by flood waters. He was taken by Life Star helicopter to the Yale New Haven Hospital with critical injuries.

Mohl, who is assigned to Troop L in Litchfield, was working the overnight shift when he called for help shortly before 4 a.m. Troopers from that barracks rushed to the area to search for him. Police have not said where in the Woodbury area they found the car or the officer.

The state was deluged with heavy rains and flooding overnight from the remnants of Hurricane Ida, which dumped more than half a foot of rain on much of Connecticut and wreaked havoc across the Northeast. At least 14 people in the greater New York region died in the storm, according to published reports, and severe tornadoes tore through parts of New Jersey.

The incident occurred in the area of Jack’s Bridge over the Pomperaug River in Woodbury.

“Troop L received an emergency call that his car had been swept into the river and he was in distress, and that’s the last they had heard of him,” State Police Col. Stavros Mellekas said Thursday.

The call set off a massive search that included nine fire departments, three airplanes including a Coast Guard plane equipped to pull someone out of the water, the state police dive team, and troopers from all over the state who searched the river banks.

Mellekas said that they found the officer’s cruiser on the bottom of the river and made entry under difficult conditions and didn’t locate the trooper. He said about 45 minutes later his body was found.

Mellekas said an investigation is underway into how the car ended up in the river and why Mohl was in that area.

Woodbury Fire Chief Janet Morgan said the vehicle was swept off the bridge and into the river. She said the Pomperaug River was about six feet over its flooding stage at that time.

“It’s an area that we have known to flood quickly in the past,” Morgan said. “It’s on one of our back roads and is not well lit, and he (the trooper) could have come across the bridge and not seen the water coming over the top.”

Morgan said the fire departments immediately started searching downriver and, at one point, firefighters from nine departments from as far away as New Milford were involved in the search. There were six fire and police boats in the river searching as well.

State Police spokesman Pedro Munoz said the sergeant was on duty at the time of the call. State police did not say why he was in that area of Woodbury.

Mohl has lived in Woodbury since 2006. His house is located less than four miles from the bridge.