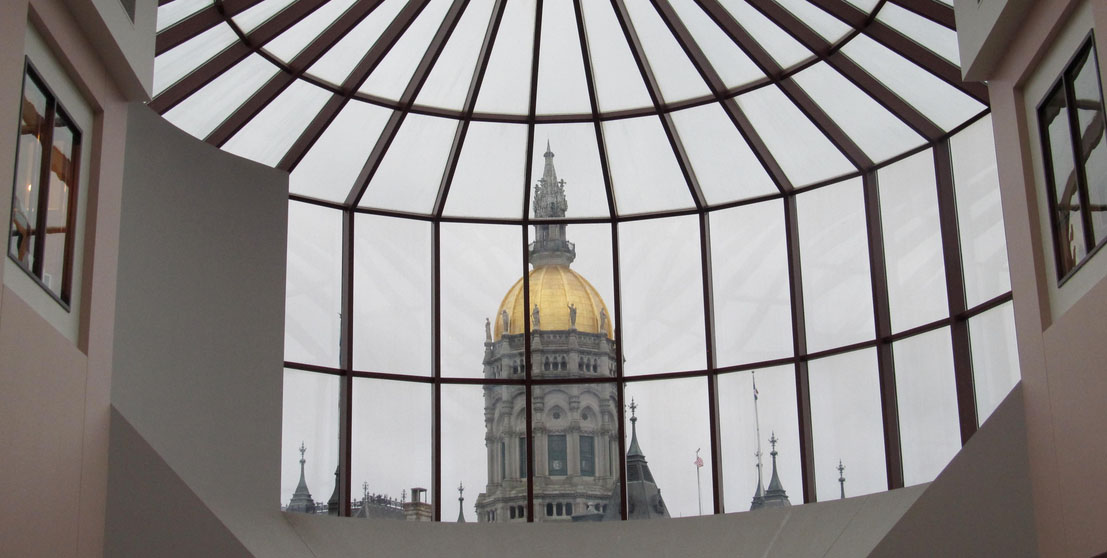 The Connecticut state Capitol, seen from inside the Legislative Office Building.

Connecticut continues to pile up huge state budget surpluses and reduce debt, despite an economy not fully recovered from the coronavirus.

But even as government coffers swell, most of Connecticut’s COVID-19 response has been paid for with federal aid, prompting some political leaders to question Gov. Ned Lamont’s approach with a new state election year, less than three months away.

Amassing record-setting reserves and wiping out billions of dollars in pension debt is wonderful, they say. But with Connecticut still down 86,000 jobs since the worst of the pandemic last spring, and with businesses on the hook for nearly $850 million in unemployment debt, should the state be doing more with its own piggy bank?

“I think Connecticut residents are far less interested in whether we have a balanced budget and what our fiscal outlook is when they’re not safe in their homes, when thousands are unemployed and gas prices are going up,” said House Minority Leader Vincent J. Candelora, R-North Branford. “Government is working for itself. It’s not working for the people of Connecticut.”

“Our rainy day fund is full, which is wonderful, and we’ve started paying down our pensions — which is wonderful and needs to continue,” said Candelora’s predecessor, Derby Republican Themis Klarides, who is weighing a 2022 gubernatorial bid. “But we have to have a holistic approach that will get Connecticut back on its feet.”

Tax relief for working families on the table again

Republicans, who haven’t controlled the governor’s office since 2010 and even one state legislative chamber since 1997, aren’t the only ones questioning the need for tax relief.

Rep. Sean Scanlon, a Guilford Democrat who co-chairs the Finance, Revenue and Bonding Committee, fought last spring for a major state relief for low- and middle-income households through creation of a new child tax credit within the state income tax system.

Lamont, a Greenwich Democrat, blocked that effort, on two grounds: One, it might not be affordable in a few years if Connecticut’s economic recovery from the pandemic isn’t robust. And second, Congress had temporarily expanded the federal child tax credit for one year and had begun talk of making that improvement permanent.

But Connecticut has some of the most extreme income and wealth inequality in the nation, and Scanlon and others counter that even a permanently enhanced federal credit — while helpful — can’t eliminate huge pockets of poverty.

Senate President Pro Tem Martin M. Looney, D-New Haven, said if any relief measures are offered when the General Assembly convenes in February 2022, those that help struggling households have the best chance.

“I think we’ll be looking at ways to build more justice and progressivity into our whole system,” he said.

And with the focus on Capitol Hill now seemingly on extending the federal enhancements for a second year only — rather than indefinitely — Scanlon said it’s time once again for state officials to discuss state tax relief for working families.

“I plan to spend a lot of my time on that next year,” the Guilford lawmaker said. “I think we have a [fiscal] path for doing that.”

The “path” Scanlon cited begins with a record-setting rainy day fund of nearly $3.1 billion — equal to 15% of the state’s entire General Fund — but it doesn’t end there.

State analysts say the $46.4 billion budget Lamont and legislators approved in June for the two fiscal years running from July 2021 through June 2023 was likely to finish with a whopping $2.3 billion left over: $1 billion after this fiscal year and $1.3 billion after 2022-23.

By late summer, Lamont’s budget office had increased its first-year surplus forecast to $1.25 billion, and Wednesday pushed it to nearly $1.5 billion.

And now nonpartisan analysts are projecting that required annual payments into the pension funds could drop by about $200 million by 2024. That’s largely because Lamont and lawmakers deposited last fiscal year’s big surplus, about $1.6 billion, into the pension system.

That $200 million annual savings is huge because 2024 is when massive federal pandemic relief sent to Connecticut will have expired.

Lamont and state lawmakers used nearly two-thirds of the $3 billion in federal American Rescue Plan Act funds to help balance the new two-year state budget. But since that same biennial package is expected to finish with more than $2 billion in surplus — and because that surplus would go into the pension systems unless redirected — it could be argued Connecticut effectively is using most of its pandemic relief to reduce retirement benefit debt.

Tackling that pension problem is huge, Republicans say, but so is jump-starting the economy. And Connecticut has enough money, they add, to do both.

“A budget surplus means politicians took more from taxpayers than they need,” said Madison Republican Bob Stefanowski, who lost the 2018 gubernatorial contest to Lamont and is considering a run in 2022. Lamont has not said yet whether he will seek re-election next year.

“How about giving some of it back to help residents deal with out-of-control energy prices, higher grocery costs or to pay for a good education?” Stefanowski added. “Or use some of the surplus to better fund law enforcement and keep residents safe?”

Businesses looking for a bigger assist from the state

Candelora is urging state officials to revisit an earlier bailout of the unemployment trust that could provide huge relief to businesses.

Connecticut will have borrowed about $1 billion by the end of 2021 to keep its unemployment trust solvent during the pandemic, according to state labor officials. Businesses are taxed with replenishing that trust.

Lamont and state legislators used $155 million of federal relief aid to cover 1/6th of that debt. But Candelora says the state should look to do more.

Chris DiPentima, president and CEO of the Connecticut Business and Industry Association, said that looming debt is a huge deterrent to hiring, and while businesses appreciate the $155 million assist, they still hope Lamont and lawmakers will cover more of the tab.

“The business community is trying to hire more than ever right now,” DiPentima said, noting that Connecticut’s 6.8% unemployment rate remains the  highest in the region and 2 percentage points higher than the national rate.

But Dante Bartolomeo, Lamont’s labor commissioner, said Connecticut is outperforming the region in job growth since just before the pandemic began and added nearly 19,000 jobs from July through September of this year.

“The top line for us is Connecticut is growing jobs,” she said. “We believe our economic recovery is strong, and it shows.”

The construction industry, which largely remained open during the pandemic, has fully recovered, Bartolomeo added.

Lamont hasn’t ruled out any tax-cutting proposals at this time, said Max Reiss, the governor’s communications director, who added the state’s economy has made far more progress since the worst of the pandemic than many realize.

The Back-To-Normal Index, a barometer of dozens of economic indicators created by Moody’s Analytics — the research arm of a major Wall Street credit-rating agency — and by CNN, ranked Connecticut fifth-highest among all states in economic activity since just before the COVID-19 outbreak in March 2020.

He noted that frequently in the 1990s and 2000s, governors and legislatures amassed billions of dollars in surpluses yet spent the bulk of these dollars without cutting taxes, building reserves or reducing debt.

“Governor Lamont is always looking for tax relief,” Reiss added. “If there are ways to do it that don’t jeopardize the significant progress that’s been made … the governor is looking for that.”