Washington — Lori Pelletier, the head of Connecticut AFL-CIO, was a main witness Tuesday at a Senate hearing on a wide range of women economic issues that Democrats hope will give them an edge with female voters this year, including equal pay and family leave.

Pelletier gave a Connecticut perspective to a campaign Democrats have waged to increase the minimum wage,  to other pocket book issues and to their standard fare of reproductive choice and access to contraception that were very effective in recent elections.

“In Connecticut we passed sick leave. It took several years,” Pelletier said. “The sky was supposed to fall, but it didn’t.”

She also defended the state’s decision to raise the minimum wage to $10.10 an hour against GOP allegations that raising the federal minimum wage to that level would be a job killer.

“What that’s going to mean is that people will have more money to spend in the economy,” she said. “They idea that women make $300 a week (and support families)…. clearly they are magicians.” 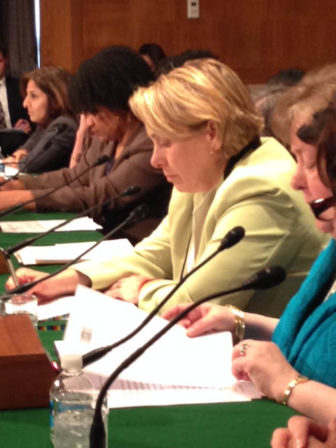 Republicans in Congress have blocked Democratic attempts to raise the federal minimum tax and strengthen equal pay protections – actions Democrats will broadcast  on the campaign trail.

Pelletier testified at a hearing of the Senate Health, Education, Labor and Pensions (HELP) Committee, about the impact of the decline of unions, which she said “has had a bigger impact on men’s pay than women’s, but it also has a big impact on women.”

“What we’re seeing today in Connecticut is more and more jobs moving offshore and being replaced with lower paid jobs without benefits, and this puts women’s economic security at risk,” she said.

Sen. Chris Murphy, D-Conn., is a member of the HELP panel. But Pelletier said she was invited to testify by the committee’s chairman, Sen. Tom Harkin, D-Iowa, who wanted to reach out to the AFL-CIO.

Murphy, who volunteered for the job of defending the Affordable Care Act from GOP attacks, asked Pelletier about the impact of Obamacare on women.

“Women will no longer be discriminated by insurance companies,” Pelletier responded. She also said health care costs are decreasing under the ACA, something that’s important to women since they are more likely to handle health care issues in their households.

Even as President Barack Obama and other Democrats are pummeled by GOP attacks on the Affordable Care Act, they’re attempting deflect those attacks by  reminding women that Obamacare offers free mammograms and other no-cost preventive care and allows children to stay on their parent’s health policies until they are 26 years old.

Republicans, meanwhile, are pushing back against Democratic allegations they are waging a “war on women.”

“The congressional budget office said it would destroy 500,000 jobs,” he said. “How does that make sense?”

Polls show Democrats have the edge among female voters. But the trick in this year’s mid-term elections is to get them to the polls.

Earlier this year, at an annual retreat in Cambridge, Md., Rep. Rosa DeLauro, D-3rd District, hosted a panel called “Unmarried Women — They Will Elect You If You Get It Right.”

Geoffrey Skelley, associate editor of Sabato’s Crystal Ball at the University of Virginia Center for Politics, said the war over the women’s  vote may help Democrats “marginally in a few races, especially if the Republican nominee in a race is sharply conservative on social issues.”

But he said Democrats face obstacles. They control the White House, and the party that controls the White House typically performs worse in midterm elections.  Skelley also said President Obama has a mediocre approval rating that will weigh down many Democrats.

“Democrats are in trouble and talking about the ‘war on women’ isn’t going to be a silver bullet,” he said.