Common Core an issue in Wilson, Kennedy race for Senate 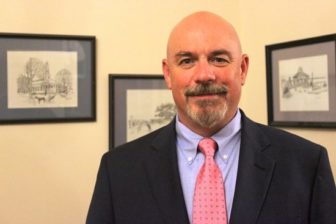 The national debate over Common Core has come to the race for the open 12th State Senate seat on Connecticut’s shoreline. Republican candidate Bruce H. Wilson, Jr. is calling for the state to reconsider its plan to require all school districts to adopt new academic standards along with new standardized tests.

Wilson said he believes in having standards in place but not “a central standard that is non-negotiable.”

His opponent, Democratic candidate Ted Kennedy, Jr., too, called for caution on rolling out new standardized tests, saying his sense is that “it is too much, too fast.” Kennedy said he is in the process of talking to parents, teachers and boards of education in the district to get their points of view.

As campaigns get underway in states across the nation, the education reform package known as Common Core is triggering strong, often divisive reactions in local, state and federal races. In Connecticut, Jonathan Pelto, a former state legislator, recently entered the gubernatorial ring with the promise of ending Common Core. All school districts are set to require new Common Core-aligned tests starting next school year. Facing criticism from teachers, Gov. Dannel P. Malloy has called for delaying linking new teacher evaluations to student performance on those tests.

States like Connecticut have rolled out Common Core with the promise of elevating standards in schools, teaching kids to think more critically at an early age. Critics charge the standards require too much teaching to the test and are devastating the morale of teachers and students alike.

Read more of this story in the Branford Eagle.