Aged rail bridge becomes exhibit in the politics of transportation

Washington – Success has many fathers; failure is an orphan.

That proverb seems to apply when it comes to efforts to replace the 118-year-old Walk Bridge in Norwalk, a busy railroad swing bridge that was stuck in the open position twice this year, blocking the busy Metro North commuter line to New York City.

On Thursday, Gov. Dannel Malloy held a press conference at the bridge, along with Sens. Richard Blumenthal, D-Conn., and Chris Murphy, and Rep. Jim Himes, D-4th District, to announce state plans to augment a $161 million federal grant so the Walk Bridge can be replaced.

Problems with the Walk Bridge and transportation in general are prominent issues in this year’s political campaigns. Himes, in particular, represents a district, Fairfield County, which has arguably the worst traffic jams in the state, and has suffered from a series of Metro-North mishaps.

The entire Connecticut congressional delegation lobbied the U.S. Department of Transportation for money to replace the bridge from an emergency relief fund established by Congress to respond to Hurricane Sandy.

But it was the Malloy administration, more specifically the Connecticut Department of Transportation, that applied for the money.  Murphy tweeted Thursday that it was “a huge win for @GovMalloyOffice.”

The state received less than half the $349 million in federal money it originally asked for and must make up the rest of the bridge’s replacement cost, about $465 million, out of state funds, including $68 million in new state bond funds.

Still, Himes, Malloy and others were upbeat about plans to replace the bridge.

“This historic federal investment is a major victory for both Norwalk and our entire region,” Himes said. “I fought hard for this funding and will continue pushing for investments to fix our crumbling bridges, roads and railways to ensure the safety of our people and make our economy more competitive.”

Both candidates in the 4th District race vow to address local transportation needs.

In a statement, Debicella accused Himes of “having an election year conversion” on the issue of transportation.

“He has had six years to fix our transportation mess, and instead of putting forward solutions, he has been traveling around the country raising money with lobbyists,” Debicella said, a reference to Himes’ job as chief fundraiser for the Democratic Congressional Campaign Committee. “I have chosen a different path – one that includes solutions that actually fix transportation and not just throw more money at the problem. We have tried it the Himes/Malloy way for too long with no results.”

Last week, Debicella held a press conference at the Westport train station to attack Himes’s efforts on transportation and roll out his own plan. 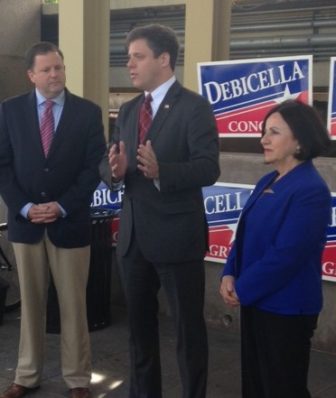 “If I can save 10 minutes off your commute, that’s more valuable than any vote I can take in Washington,” Debicella said.

He accused Himes of failing to keep a campaign promise — made during the Democrat’s first bid for a seat in Congress —  to become a member of the House Transportation and Infrastructure Committee. Debicella said if elected he would seek a seat on that panel.

Himes said the Democratic leadership distributes committee jobs, and it decided he would be more useful on the Financial Services Committee because of his background on Wall Street.

“I asked for Transportation, but they put me on Financial Services,” he said. “I think that’s because they didn’t have enough people familiar with financial services and were about to consider Dodd-Frank,” a major reform bill put forward in the wake of the financial crisis.

Congressional delegations, especially if their members work well together, try to coordinate which committees they serve on to be able to better serve the overall interests of the state. Connecticut has representation on the Transportation and Infrastructure Committee because Rep. Elizabeth Esty, D-5th District, is a member.

Debicella said his transportation plan includes mitigating traffic snarls by easing “choke points” on the Merritt Parkway and I-95 with new entrance and exit ramps and added lanes to permit easy merging. If sent to Washington, Debicella said, he’d secure money for these and other, transportation projects.

“That’s not the role of Congress, that’s the role of the state Department of Transportation,” Himes said.

How effective a lawmaker can be in steering transportation dollars home is subject to debate, especially since Congress has eliminated earmarks, or the funding for local projects that lawmakers used to slip into bills.

The state DOT receives hundreds of millions of dollars from the federal government each year, which pays for about 80 percent of major transportation projects. The funds are allocated to every state through a series of complex formulas that include a calculation that includes factors such as the number of miles driven in a state every year.

The Connecticut DOT determines how those federal dollars will be spent and prioritizes projects. Congress’s role is to make sure the Highway Trust Fund, the major source of transportation dollars, remains solvent and to appropriate money for other transportation programs.

It’s difficult for any lawmaker to steer money to pet projects, but there are opportunities for states to apply for certain competitive transportation grants, as the Malloy administration did with the Walk Bridge, that lawmakers can help lobby for.

These grants are usually relatively smaller amounts of money, like a recently won $14.4 million grant that will help Waterbury revitalize its downtown.

Transportation woes are expected to continue to be part of the campaign in the 4th District race and a subject of the first debate between Himes and Debicella on Oct. 19 in Wilton.