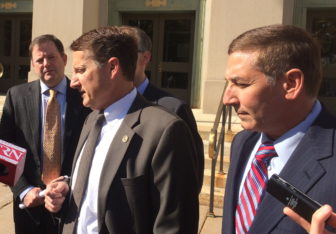 By using money from its federal account, which can support state campaigns in limited circumstances, the Democrats are skirting a ban on contributions from state contractors to state campaigns, Republicans said.

“They want to use prohibited state-contractor money to help get Dan Malloy elected,” said Jerry Labriola Jr., the GOP state chairman. “We had no other choice but to resort to this lawsuit today.”

Labriola said the party is asking a judge to stop the Democrats from spending the federal dollars on the state campaign. It also is asking the State Elections Enforcement Commission to order Malloy to forfeit his public financing grant of $6.5 million for his campaign.

Action on either of those requests is extremely unlikely prior to the Nov. 4 election, but the legal action gave Labriola and other top Republicans an opportunity to paint Malloy as undermining campaign finance reforms adopted after an impeachment inquiry forced the resignation of Gov. John G. Rowland in 2004.

Named as defendants are the Connecticut Democratic Party and the Malloy campaign.

The Democrats, after seeking an advisory opinion from the Federal Election Commission about whether they could use funds in their federal campaign account to promote Malloy in a mailer, abruptly made the expenditure without an answer.

It seemed an odd choice by Democrats to provoke a fight over a mailer in the last three weeks of a deadlocked campaign between Malloy and Foley. Republicans suggested the Democrats have millions in available federal cash to use on the state race.

But campaign finance reports on file with the Federal Election Commission indicate that is not the case.

Under Malloy, the party has raised an impressive $4 million since Jan. 1, 2013. It reported $399,000 in available cash in its last monthly report, and Democrats have been burning through an average of $410,000 a month since May, much of it to pay staff hired to execute a get-out-the-vote plan.

In other words, the Democratic funds seem committed through election day.

Democrats appear to be betting that the issue of campaign finance will not move votes, even in a state where a previous governor, Rowland, went to prison over personal favors he accepted from recipients of state contracts.

The state contractor ban and restrictions on lobbyist donations were imposed after the Rowland scandal, as was the creation of a voluntary system of publicly financed campaigns.

“This undoes all of those clean election protections and makes pay for play back in Connecticut,” said Senate Minority Leader John P. McKinney, R-Fairfield.

Malloy was asked during a debate Thursday night if his use of the federal campaign funds makes “a mockery” of the reforms. The governor replied that his party was following federal law.

“His obligation as governor of the state of Connecticut is to abide by our laws and to defend our laws,” McKinney said.

Sen. Len Fasano, R-North Haven, who is expected to succeed McKinney in January as the Senate GOP leader, said even if Malloy’s interpretation of federal law were correct, he still is in the wrong.

As a participant in the voluntary public financing program, he said, Malloy signed a contract promising to abide by state law, including a ban on contractor contributions.

Campaign finance law is confusing, even to political professionals.

Both state parties maintain state and federal accounts. Generally, the former is used exclusively in support of state campaigns, while federal law dictates that the latter is to be used for federal campaigns — and certain activities that benefit both, such as get-out-the-vote efforts.

But the Republicans say there is nothing confusing about the mailer sent to voters this week. According to an analysis by the State Elections Enforcement Commission, 99.6 percent of the material promoted Malloy, while the remaining 0.4 percent was a broader message.

Democrats responded by claiming the GOP was hypocritical, because it has accepted state contractor contributions to its federal account.

But Labriola said those dollars were used for federal campaigns, not to support its nominee for governor, Tom Foley.

Foley was attending a fundraiser late Friday with Gov. Bobby Jindal of Louisiana, but Labriola said the proceeds would go to the GOP’s state account. Jindal had no general press events in Connecticut.

Devon Puglia, a spokesman for the Democrats, said Jindal had his own history of campaign finance violations. He called the lawsuit an attempt to distract voters.

“They’re doing it to hide from their positions of wanting to roll back our gun law, arguing that global warming isn’t man-made, and taking Connecticut backwards,” Puglia said.

Foley declined to say during a debate Thursday if he believed that mankind contributed to rising global temperatures, a statement the Democrats tried to exploit in a conference call with environmentalists.

Lori Brown of the League of Conservation Voters said Foley made a similar statement during an interview with her group.

“It was rather stunning to us,” she said.