DeLauro: Not viewing opening to Cuba with ‘rose-colored glasses’ 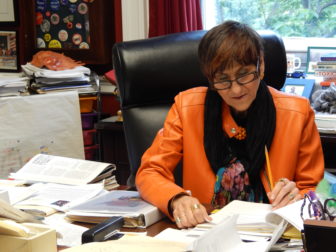 Washington – Back from a nearly week-long congressional trip to Cuba and other Caribbean points, Rep. Rosa DeLauro said she is optimistic about President Obama’s opening to the island, but realizes the thaw in relations is limited.

“No one has their head in the sand or is wearing rose-colored glasses,” DeLauro, D-3rd District, said. DeLauro was part of a nine-member group of Democrats, led by House Minority Leader Nancy Pelosi, that met with key Cuban officials – but not Cuban leader Raul Castro – to discuss how to implement Obama’s relaxation of rules on travel and trade with Cuba.

DeLauro said moving toward full diplomatic relations and other openings would be slow going, although some things may happen more quickly.” While in Cuba, DeLauro and the other lawmakers met with Foreign Affairs Minister Bruno Rodríguez Parrilla; the director of U.S. affairs at the Cuban Foreign Ministry, Josefina Vidal; and the vice president of the National Assembly, Ana Maria Mari Machado.

They also met with Cuban Vice President Miguel Diaz-Canel, who is first in line to be Cuba’s next president when Raul Castro steps down in 2018. Brothers Fidel and Raul Castro have been in power since 1959.

DeLauro said she told Cuban officials “the president went as far as he could go” to normalize relations. Cuban officials want the United States to take Cuba off the State Department’s list of state sponsors of terrorism, which they say hurts their nation’s ability to secure credit from international lenders.

Cuba also has other longstanding demands, including that the United States shut down its prison in Guantanamo and end the economic embargo.

Obama has asked the State Department to review whether Cuba should stay on the terrorist list. DeLauro insists it does not belong on a list that includes Syria, Sudan, Iran and North Korea.

The Obama administration can take Cuba off the list of states who sponsor terrorism. But an end to the embargo would take an act of Congress.

DeLauro said there is strong bipartisan support in Congress to end the embargo, but Republican leaders in the House and Senate will never allow a vote on the issue.

The lawmakers were criticized for not meeting with any Cuban dissidents during their visit, but DeLauro said they met with Cuban journalists and “people in civil society.”

“We met with a good cross-section of Cuban society,” she said.

This is the third time DeLauro has visited Cuba. She is a member of the Cuba Working Group, a bipartisan organization (although recently it leans Democratic) of members of Congress who oppose the embargo.

The delegation also went to Haiti and the Dominican Republic. This was the first time DeLauro had visited those countries and she was stunned by Haitian poverty, the lack of a health infrastructure and the human rights abuse there, including “tremendous violence against women.”

Haiti is the poorest country in the Western Hemisphere,” she said. “People are living in serious, serious poverty.”