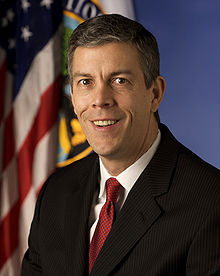 Washington – Connecticut elementary students have some of the highest reading and math scores in the nation, but a stubborn achievement gap persists between the state’s highest- and lowest-performing schools, said a White House report issued Monday.

The report was released as part of the Obama administration’s campaign to influence the shaping of a new education bill, which the Senate will begin to debate this week.

It compares how many students were performing at grade level in 2013 in the lowest-performing 5 percent of the elementary and middle schools in each state with the performance of students in the rest of the schools.

Those 44- and 43-percentage point achievement gaps were among the highest in the nation.

“Inequality of opportunity for education is a stain on our nation,” said Education Secretary Arne Duncan.

Nationally, the White House report said, only one-in-four students attending the lowest-performing high schools graduate on time, compared to an 87 percent graduation rate at all other high schools.

In Connecticut, the graduation rate gap was 36 percentage points. Low performing schools graduated 53 percent of their students — a relatively large percentage — while all schools graduated 89 of 100, two points above the national average. (See the graphic at the end of this story for all scores.)

“There is no doubt more work to be done to close Connecticut’s achievement and opportunity gaps, but we are encouraged by the strides we are making in our state,” said Kelly Donnelly, spokeswoman for the Connecticut Department of Education. “Persistent achievement gaps have started to close for our 12th-graders and our graduation gaps are continuing to close.”

The Senate this week plans to begin work on the Every Child Achieves Act of 2015, a bipartisan overhaul of current federal education law. Congress has not reauthorized the Elementary and Secondary School Act (ESEA), first enacted in 1965, since adoption of the No Chlld Left Behind Act of 2001, the nation’s current law.

The new education bill would replace No Child Left Behind. It would eliminate the current accountability system and give states much more flexibility in creating their own.

But the legislation would maintain an annual federal testing schedule and the requirement that states report student achievement data.

The coalition of 36 organizations, which includes the NAACP and the National Council of la Raza, said states must be required to identify schools where all students are not meeting goals and report disaggregated data in a way that can be cross-tabulated by gender and disability status across major racial and ethnic groups.

The coalition also wants the new education bill to require states to intervene to remedy disparities in resources among school districts.

The coalition is also seeking more civil rights protections in the bill.

“The Senate bill is missing key pieces and cannot stay as it stands,” Duncan said.

Donnelly said the state “is monitoring” congressional action on the education bill, but has not taken a position on the legislation.

House GOP leaders were forced to yank their education authorization bill from the floor earlier this year when two powerful conservative organizations, the Club for Growth and Heritage Action for America, announced their opposition.

The group wanted the bill to allow states to opt out of accountability requirements entirely.

The House may put a rewrite of that bill on the floor this week, but Duncan said it would be dead on arrival.